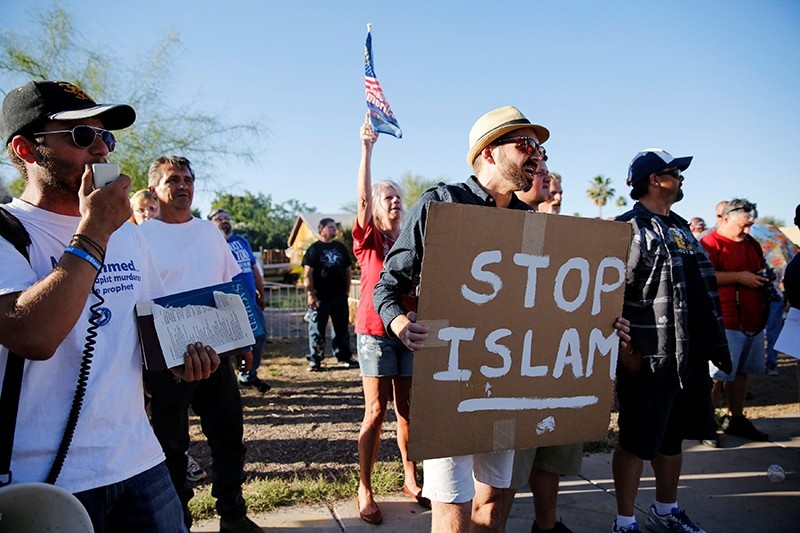 Demonstrators shout during a ,Freedom of Speech Rally Round II, outside the Islamic Community Center in Phoenix, Arizona, May 29, 2015. (Reuters Photo)
by Daily Sabah Aug 23, 2017 12:00 am

A U.S.-based far-right group canceled 76 anti-Muslim rallies across 36 states that were due to be held September 9, a statement said Tuesday.

ACT! for America, considered the largest anti-Muslim group in the U.S., explained that the decision to cancel the rallies was based on a possible "security issues" as the group's 'America First' demonstrations would certainly attract massive counter-protests.

The decision comes after the events of a so-called 'free speech' rally in Boston attended by white supremacists, when thousands of anti-Nazi demonstrators dwarfed the small group of alt-right members.

Instead, ACT announced plans to hold a 'Day of ACTion' "online and in other media," the group's statement published in Breitbart, which recently welcomed back now former White House Chief Strategist Steve Bannon as chief executive, said.

ACT claims to have 750,000 members, and is identified as the largest anti-Muslim group in the U.S. by two hate group watchdogs, the Southern Poverty Law Center (SPLC) and Anti-Defamation League (ADL).

According to ADL, "ACT propagates the hateful conspiracy theory that Muslims are infiltrating U.S. institutions in order to impose Sharia law."