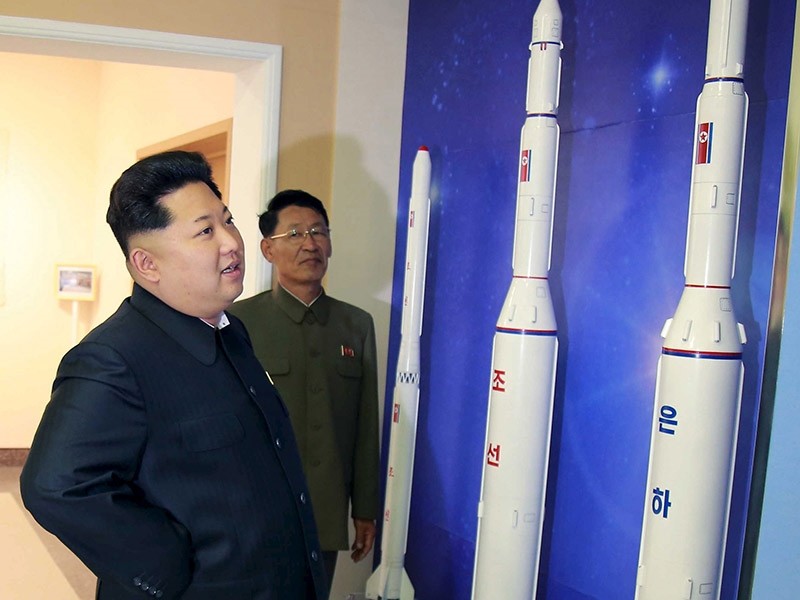 Trump's remarks, at a rally in Phoenix, came hours after Secretary of State Rex Tillerson said talks with the nuclear-armed North over its banned weapons programs might be possible "in the near future".

The comments are a marked contrast to the rhetoric of recent weeks, when Trump spoke of raining "fire and fury" on the North, and come as tensions have eased after Kim pulled back from a plan to send a salvo of missiles towards the U.S. Pacific territory of Guam.

But Washington also imposed new sanctions on Chinese and Russian firms suspected of doing business with the North.

On a visit to the Chemical Material Institute of the Academy of Defense Science, Kim ordered stepped-up production of rocket engines and intercontinental ballistic missile (ICBM) nosecones, state media reported.

At a campaign-style rally in Phoenix, Trump said his aggressive rhetoric was starting to bear fruit.

"Some people said it was too strong. It's not strong enough," he told thousands of supporters. "But Kim Jong-Un, I respect the fact that I believe he is starting to respect us. I respect that fact very much.

"And maybe, probably not, but maybe something positive can come about."

Earlier Tillerson acknowledged Pyongyang's recent "restraint" in not carrying out fresh nuclear or missile tests in response to tough new United Nations sanctions, the seventh set imposed on it.

"I am pleased to see that the regime in Pyongyang has certainly demonstrated some level of restraint that we've not seen in the past," Tillerson said at a rare press conference, adding that talks may be possible "in the near future".

U.S. officials told AFP that Tillerson was not thanking Pyongyang, nor making any concession on Washington's determination to halt Kim's missile program and negotiate the denuclearization of the Korean peninsula.

The Trump administration's rhetoric has been highly variable but Washington has said it would be open to dialogue if Pyongyang took steps to calm tensions.

The North regards current joint military exercises by Seoul and Washington as a rehearsal for an invasion.

In a commentary released early Thursday Pyongyang's official Korean Central News Agency said statements from U.S. that fewer troops were participating in the exercises were aimed at "craftily trying to defuse the caution" of Pyongyang.

It went on to urge the U.S. and its allies to "act with discretion if they want to evade the historic moment of death".

KCNA had earlier described Trump as a "mad guy" who "frequently posts weird articles of his ego-driven thoughts in his twitter and spouts rubbish".

Tensions between North Korea and the United States and its allies soared last month after Pyongyang tested two missiles that appeared to bring most of the U.S. mainland within range.

The North says it needs nuclear weapons to protect itself against the U.S.

It has made rapid technological strides under Kim, and released pictures Wednesday of a visit by him to the Chemical Material Institute of the Academy of Defense Science, which develops the North's missiles.

Kim, in a black suit, was shown next to a large brown tube that Joshua Pollack of the U.S. Middlebury Institute of International Studies said on Twitter was a "wound fibre cylinder, evidently a large-diameter solid-rocket motor casing in the making".

Such casings are harder to manufacture than metal ones but are much lighter, enabling longer ranges and heavier payloads.

Other pictures included missile schematics and what appeared to be production processes.

"We have diagrams and names on two apparent new solid fuel multistage North Korean nuclear capable missiles," one of them an Intercontinental Ballistic Missile and the other a medium- or intermediate-range device, said independent missile and nuclear analyst George Herbert.

KCNA said the nosecones and engine jets were made of "carbon/carbon compound material", and that Kim "instructed the institute to produce more solid-fuel rocket engines and rocket warhead tips".

Many of the elements on show were objectives rather than currently existing technology, analysts said, but even so, Jeffrey Lewis, of the armscontrolwonk.com website, noted: "It's all bad."

"If I understand North Korean propaganda, this is their way of telling us what we'll see in the air in the coming year."

Trump has urged Beijing, North Korea's only major ally, to bring greater pressure to bear in reining in its neighbor's nuclear efforts, suggesting that the United States may offer concessions on trade in return.

On Tuesday the U.S. Treasury slapped sanctions on 16 Chinese and Russian individuals and companies, accusing them of supporting North Korea's weapons programs and attempting to evade U.S. sanctions.

Beijing said Wednesday the move "will not help the solution of the problem", nor would it enhance mutual trust.