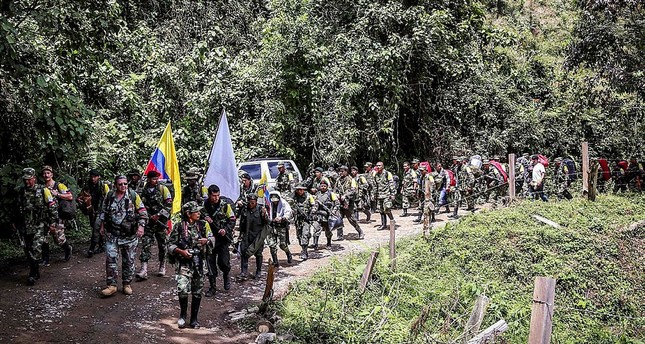 Colombia's leftist FARC rebels seek political rebirth on Sunday as they move to transform into a party to seek elected office after disarming to end a half-century war.

About 1,000 delegates from the freshly demobilized Revolutionary Armed Forces of Colombia will launch a founding congress to choose their political representatives.

They will choose a name for the party and candidates to run in next year's general elections.

"We are going to define the character of the political party that we aspire to build," former guerrilla commander Carlos Antonio Lozada told AFP.

He said they will also shape "its structure and name the leaders, at least at national level."

Another former commander of the force, Ivan Marquez, said he expected the movement to call itself the Alternative Revolutionary Force of Colombia.

However, the overall FARC leader Rodrigo Londono canvassed opinion on Twitter and many respondents said they favored the name "New Colombia."

"Some want to keep the word 'revolutionary' while others want to change that to show that this is a new start," Masse said.

Regardless of how many votes they may win, the peace deal signed with the government last year guarantees the new party five seats in each of the two legislative chambers for two terms.

"We hope to get enough votes not only to justify those five senate and five lower house representatives, but also we aspire hopefully to achieve an even greater representation," Lozada said.

Londono has ruled out the new party fielding a presidential candidate.

But he said it will support a candidate who guarantees the peace deal the FARC signed with center-right President Juan Manuel Santos.

The communist FARC formed in 1964 from a peasant uprising for rural land rights.

Its members have avoided publicly framing their current discussions on their political future with terms such as "socialist" and "communist" however.

Another former FARC commander, Pastor Alape, said they were looking for a broader "liberal democracy" movement.

Some ex-FARC leaders have said it will be "anti-imperialist" and "anti-patriarchal" in spirit.

Lozada said it would focus on promoting free health and education and environmental protection.

After 53 years of attacks and kidnappings, the FARC in its new form faces a struggle for acceptance.

Recent polls indicate that more than 80 percent of Colombians are opposed to it.

"There is a long history of grievances weighing against the FARC," said analyst Angelika Rettberg.

Voters narrowly rejected the peace deal in a referendum last year. Santos and the FARC tweaked it and the government pushed it through congress.

"The FARC will face a number of challenges The first is not to betray their support base. The second is to enlarge their electorate," said Masse.

"The third is to show that they are capable of doing politics differently and not letting themselves get sucked into traditional patronage politics."

The FARC has invited other likely presidential candidates to its congress, though none has publicly confirmed attendance. It has also invited some 150 international participants.

The congress in Bogota runs until September 1, when the party will hold an official launch ceremony in Bolivar Square, the heart of the capital's political district.

The Colombian conflict drew in various rebel forces, paramilitary groups and state forces over the decades.

It left some 260,000 people confirmed dead, 60,000 unaccounted for and seven million displaced.

The government has opened peace talks with the last active group, the 1,500-strong National Liberation Army, in the hope of sealing what Santos calls an "overall peace."

Share on Facebook Share on Twitter
Previous in Americas Mark Cuban isn't ready to launch a formal campaign to challenge U.S.... Next in Americas Emergency personnel have responded to more than 2,000 calls to 911...
DAILY SABAH RECOMMENDS