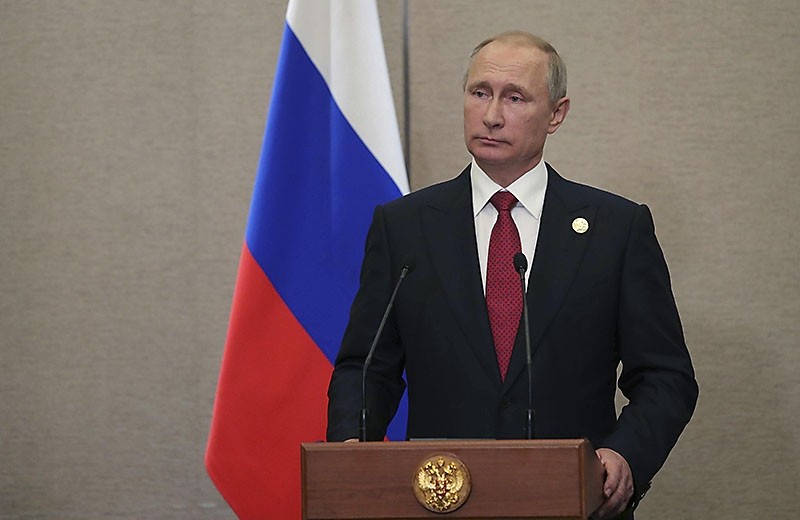 Russian President Vladimir Putin on Tuesday condemned North Korea's latest nuclear test, but also warned against using military force against the country, calling it a "road to nowhere" that could lead to a "global catastrophe."

The Russian president, who was in China for a summit of leading emerging economies, told reporters that he had remarked to one of his counterparts at the talks that North Korea "will eat grass but will not give up the (nuclear) program, if they don't feel safe."

Putin said it was important that all parties affected by the crisis, including North Korea, not face "threats of annihilation" and "step on the path of cooperation."

Putin said North Korea's neighbors should engage with it, not whip up "military hysteria."

"It's a road to nowhere. Whipping up military hysteria — this will lead to no good," he said. "It could cause a global catastrophe and an enormous loss of life."

Nebenzia said the only initiative on paper is a Chinese-Russian suspension-for-suspension proposal that would halt North Korean nuclear and missile tests in exchange for the U.S. and South Korea halting their joint military exercises.

He told reporters at U.N. headquarters on Tuesday that Russia would welcome other initiatives, saying that the Swiss have offered mediation services and "if that works, I'll be happy."

Nebenzia said he hasn't seen the draft resolution and told reporters Haley's deadline is "a little premature" especially since the Security Council was on a visit to Ethiopia and isn't scheduled to meet again until Sept. 11.

He stressed that a military option should be "ruled out of any discussions." Nebenzia also said the U.N. Security Council may need "a separate political resolution that stresses diplomacy rather than sanctions."

Asked about a possible oil embargo or ban on North Koreans working abroad, he said: "We wouldn't like to see the ordinary people, the citizens of North Korea, suffering for what the leadership is doing."

"And unfortunately, economic measures that might be adopted — they will definitely fall on the Korean people themselves, not on the Korean nuclear or ballistic (missile) problem," Nebenzia said.