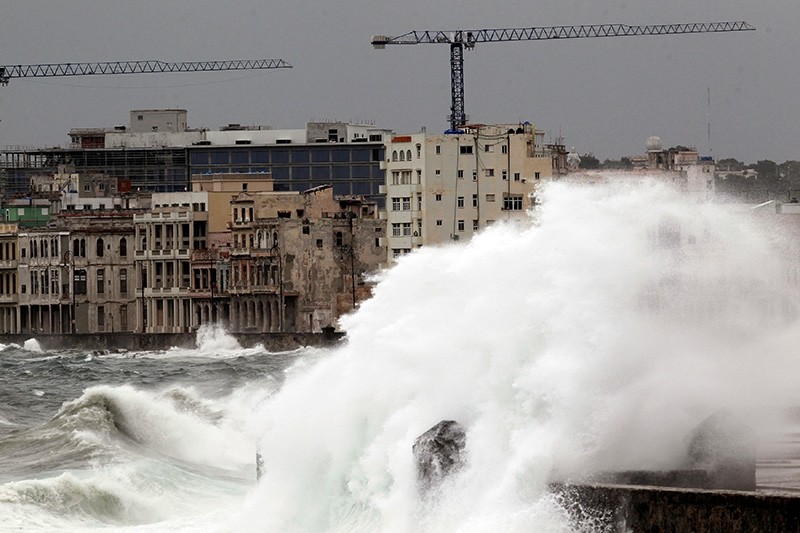 Waves crash against the seafront boulevard El Malecon ahead of the passing of Hurricane Irma, in Havana, Cuba September 9, 2017. (Reuters Photo)
by Compiled from Wire Services Sep 10, 2017 12:00 am

Hurricane Irma ripped roofs off houses and flooded hundreds of miles of coastline as it raked Cuba's northern coast after devastating islands the length of the Caribbean in a trail of destruction that has left at least 25 people dead so far.

As Irma left Cuba late Saturday and directed its 120 mph (195 kph) winds toward Florida, authorities on the island were assessing the damage and warning of staggering damage to keys off the northern coast studded with all-inclusive resorts and cities, as well as farmland in central Cuba.

There were no immediate reports of deaths in Cuba - a country that prides itself on its disaster preparedness - but authorities were trying to restore power, clear roads and warning that people should stay off the streets of Havana because flooding could continue into Monday.

Residents of "the capital should know that the flooding is going to last more than 36 hours, in other words, it is going to persist," Civil Defense Col. Luis Angel Macareno said late Saturday, adding that the waters had reach at about 2,000 feet (600 meters) into Havana.

As Irma rolled in, Cuban soldiers went through coastal towns to force residents to evacuate, taking people to shelters at government buildings and schools — and even caves.

Authorities said they had evacuated more than a million people as a precaution, including about 4,000 in the capital.

Video images from northern and eastern Cuba showed uprooted utility poles and signs, many downed trees and extensive damage to roofs. Witnesses said a provincial museum near the eye of the storm was in ruins. And authorities in the city of Santa Clara said 39 buildings collapsed.

More than 5,000 tourists were evacuated from the keys off Cuba's north-central coast, where the government has built dozens of resorts in recent years.

Civil Defense official Gregorio Torres said authorities were trying to tally the extent of the damage in eastern Cuba, home to hundreds of rural communities and farmland.

In Caibarien, a small coastal city about 200 miles (320 kilometers) east of Havana, winds downed power lines and a three-block area was under water. Many residents had stayed put, hoping to ride out the storm.

"Oh God, this is going to destroy the town," a local woman who identified herself only as Francis, 19, told AFP.

She fled her home near the seafront to seek refuge in her grandfather's house.

"The water was already at the corner near my house. By now it will be full of water," she said.

Ambulances and firefighters patrolled streets littered with hunks of roofs, power lines and tree branches cast down by strong winds that blasted over Cuba on Saturday.

In one park, the wind tore up benches that had been screwed down into the concrete floor.

Local radio issued constant messages warning people not to leave their homes while the hurricane passed.

Yet still some locals came out into the streets on bicycles to check on their friends and relatives.

Ramon Cobas, 72, and his wife Rosa, 64, sheltered six relatives in their house, one of the sturdiest buildings in the town.

Fragments of glass rubble from other buildings struck the house as they huddled inside.

"These winds are stronger than those of Kate," said Rosa, referring to the devastation wrought in 1985 by Hurricane Kate.

"I'm afraid even this house will fall down. And I am afraid for the neighbors."

Residents were also afraid of flooding since the town has no storm drains in its streets.

Irma was "seriously" damaging the center of the island with winds up to 256 kilometers (159 miles) per hour, Cuban state media said.

The storm weakened slightly to Category 3 after making landfall in Cuba early Saturday, according to the US National Hurricane Center (NHC).

Cuba's state meteorological service reported waves of up to seven meters (23 feet) on the northern coast. Irma was affecting the "whole territory" of Cuba, it said.

"It has finished raining, but all night long there were terrible winds" that ripped up trees, knocked down power lines and damaged roofs, Gisela Fernandez, a 42-year-old nurse in central Villa Clara province, told AFP.

A large part of the center and east of the island was without power, according to television reports.

There were no confirmed casualties in Cuba. But the hurricane killed at least 25 people earlier on its path across the Caribbean.

Meanwhile, Havana was forecast to receive just the tail-end of Irma, but civil defense authorities placed it and two neighboring provinces on maximum flood alert.

Authorities in the Cuban capital, population two million, were evacuating people from low-lying districts at risk from Atlantic storm surges.

Leonor Herrera, a 64-year-old retiree, said the last time she witnessed waves in the city was during 2005's Hurricane Wilma, when the water "was up to our knees."

"At the moment, it's not so high, but there's times when it rises and you must run inside," she said.

Tourism minister Alexis Trujillo said authorities had "evacuated all the hotels on the coast" around Havana, a major destination for foreign tourists.

"They told us we were in danger," said Daysi Cruz, 68, after being evacuated from her home near the seafront to go and stay with relatives.

"I tried to put some of my things in a high place so they don't get damaged if the water comes."

Before slamming into Cuba, Irma had caused havoc in the Caribbean, where it ravaged such lush resort islands as St. Martin, St. Barts, St. Thomas, Barbuda and Anguilla.

Many of Irma's victims fled their battered islands on ferries and fishing boats for fear Hurricane Jose would destroy or drench anything Irma left untouched, but Jose veered away before doing much more damage.

On the Dutch side of St. Martin, an island divided between French and Dutch control, an estimated 70 percent of the homes were destroyed by Irma, according to the Dutch government.

Prime Minister William Marlin said about 1,600 tourists had been evacuated and efforts were being made to move 1,200 more.

Marlin said many countries and people have offered help to St. Maarten, but authorities were waiting on the weather conditions to see how it could be coordinated. Authorities are still trying to determine the extent of damage to the island but he said 28 police officers lost homes during the storms.

The U.S. State Department helped more than 500 Americans fly out of St. Martin, starting with those in need of urgent medical care, spokeswoman Heather Nauert said.

Carol Basch, a 53-year-old tourist from Savannah, Georgia, took refuge during the storm in the bathroom of her St. Martin hotel room after windows shattered. She stayed there praying for about four hours, surrounding herself with pillows.

"I kept saying, 'Lord, please stop this, and soon, soon,'" said Basch, who was evacuated to Puerto Rico. "I'm glad I'm alive. I didn't think I was going to make it."

Some islands received a last-minute reprieve from Jose as it passed by. France and the Netherlands said their islands in the Caribbean were spared major damage from Jose, which passed farther away from the islands than expected.

The U.S. National Hurricane Center downgraded a hurricane warning for Barbuda and Anguilla. A hurricane watch also was discontinued for nearby Antigua.

In a tweet, the Dutch navy said the security situation on St. Maarten, which saw widespread looting and robberies after Hurricane Irma, had improved thanks to patrols by marines and police flown to the island to help overwhelmed local law enforcement.