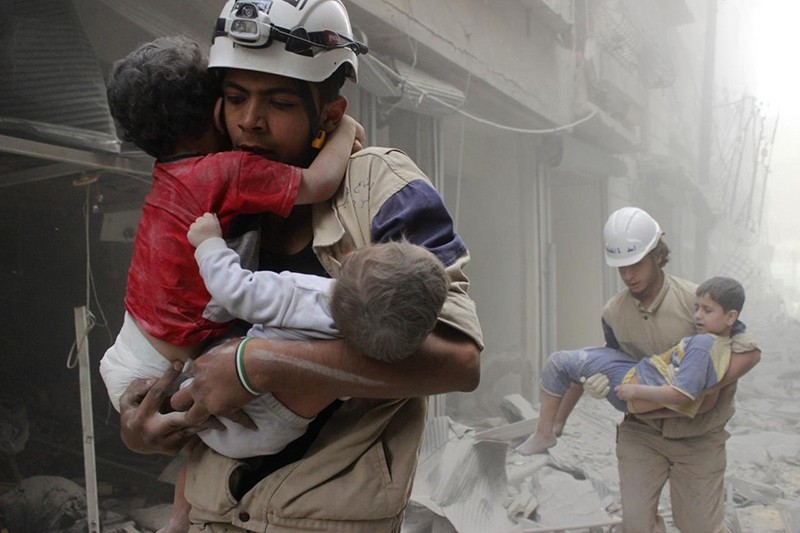 North Korea allegedly cooperated with Syria on its missile and chemical weapons programs and illegally exported coal, iron and other commodities worth at least $270 million to China and other countries including India, Malaysia and Sri Lanka in the six-month period ending in early August in violation of U.N. sanctions, a panel of U.N. experts said.

The experts monitoring sanctions said in a report released Saturday that Kim Jong Un's government continues to flout sanctions on commodities as well as an arms embargo and restrictions on shipping and financial activities.

They said North Korea is also reportedly continuing prohibited nuclear activities with weapons-grade fissile material production at the Yongbyon nuclear complex, construction and maintenance at the Punggye-ri nuclear test site, and at a uranium mine in Pyongsan.

The eight-member panel of experts said it is also investigating the widespread presence of North Koreans in Africa and the Middle East, particularly in Syria, "including their involvement in prohibited activities."

The experts said one inquiry is into "reported prohibited chemical, ballistic missile and conventional arms cooperation" between Syria and the Democratic People's Republic of Korea, the country's official name. They said this includes activities on Syrian Scud missile programs and "maintenance and repair of Syrian surface-to-air missiles (SAM) air defense systems."

The panel noted that two unnamed countries reported intercepting shipments destined for Syria. It did not identify

The 111-page report was written before North Korea's sixth and most powerful nuclear test last Sunday and its latest launch of a powerful new intermediate-range ballistic missile over Japan.

It was made public two days before the United States has called for a vote on a new sanctions resolution. The original U.S. draft would impose the toughest-ever sanctions on North Korea including banning all oil and natural gas exports to the country and freezing all foreign financial assets of the government and its leader Kim Jong Un.

The experts said implementation of existing sanctions "lags far behind what is necessary to achieve the core goal of denuclearization" of the Korean peninsula.

They blamed "lax enforcement" of sanctions coupled North Korea's "evolving evasion techniques" for undermining the achievement of this goal which would see the North abandon all weapons of mass destruction.

On the export of commodities — a key source of foreign exchange for the DPRK — the experts said that following China's suspension of coal imports from the North in February, the DPRK has been rerouting coal to other countries including Malaysia and Vietnam.

The panel said imports of DPRK coal, iron and iron ore violate U.N. sanctions unless the countries have received an exemption.

There are no exemptions for importing silver, copper, zinc, nickel and gold from the DPRK. And since December 2016, the experts said China, Sri Lanka, and India imported one or more of these minerals in violation of sanctions.

As for violations of the arms embargo, the panel said it was conducting investigations in Angola, Congo, Eritrea, Mozambique, Namibia, Tanzania and Uganda as well as Syria.

In Mozambique, for example, the experts said they are looking into the reported supply of shoulder-launched surface-to-air missiles (SAM), air defense systems, other SAMs and radar by a North Korean trading company. They are also investigating reports that the same company is repairing and upgrading Tanzania's SAM systems.

When it comes to financial sanctions, the panel said the DPRK continues to evade and violate them in a number of ways: Many DPRK financial institutions maintain representatives overseas who conduct transactions that facilitate prohibited programs; many foreign financial institutions wittingly or unwittingly provide banking services to DPRK front companies and others engaged in prohibited activities; and foreign investments in DPRK banks or joint ventures give those banks access to funding and the international financial system.

In addition, the experts said, "DPRK officials and entities have engaged in deceptive financial practices, including opening multiple bank accounts in the same country and in neighboring countries in their own names, under family members' names, and in the names of front companies."

As for shipping, the experts said the number of foreign-flagged DPRK vessels has been "dramatically reduced" in response to U.N. sanctions. But they said North Korea "continued to hone its evasion tactics" by increasing the number of DPRK-flagged ships by a corresponding number.
North Korea has been under U.N. sanctions since 2006 over its ballistic missile and nuclear programs and the Security Council has ratcheted up the measures in response to five nuclear weapons tests and four long-range missile launches.

Syria agreed to destroy its chemical weapons in 2013 under a deal brokered by Russia and the United States. However, diplomats and weapons inspectors suspect Syria may have secretly maintained or developed a new chemical weapons capability.

During the country's more than six-year long civil war the Organization for the Prohibition of Chemical Weapons has said the banned nerve agent sarin has been used at least twice, while the use of chlorine as a weapon has been widespread. The Assad regime has repeatedly denied using chemical weapons.