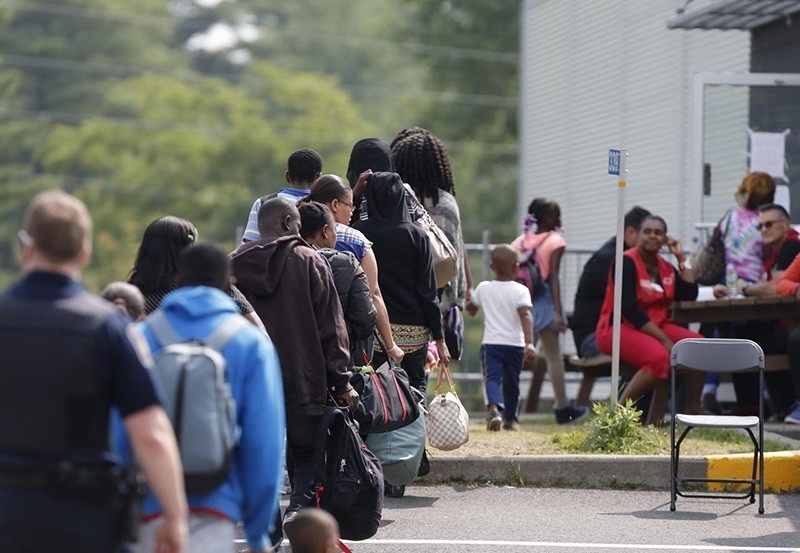 A group of asylum seekers wait to be processed after being escorted from their tent encampment to the Canada Border Services in Lacolle, Quebec (Reuters Photo)
by Sep 12, 2017 12:00 am

Canada has deported hundreds of people to countries designated too dangerous for civilians, with more than half of those people being sent back to Iraq, according to government data obtained by Reuters.

The spike in deportations comes as Canada faces a record number of migrants and is on track to have the most refugee claims in more than a decade. That has left the country scrambling to cope with the influx of asylum seekers, many crossing the U.S. border illegally.

Between January 2014 and Sept. 6, 2017, Canada sent 249 people to 11 countries for which the government had suspended or deferred deportations because of dangers to civilians.

That includes 134 people to Iraq, 62 to the Democratic Republic of Congo and 43 to Afghanistan, the data show.

"The decision to remove someone from Canada is not taken lightly," Canada Border Services Agency spokeswoman Patrizia Giolti wrote in an email.

"Everyone ordered removed from Canada is entitled to due process before the law, and all removal orders are subject to various levels of appeal."

The Canada Council for Refugees has said existing avenues of appeal are too limited, leaving little recourse for people facing deportation to dangerous countries.

Canada can deport anyone who is not a citizen, for reasons including criminality, exhausting attempts to obtain permanent residency and non-compliance with immigration laws.

The federal government has suspension or deferral designations for countries or regions deemed dangerous but may still deport people to them because of criminality, security risks or human rights violations.

The United Nations' High Commission on Refugees recommends states refrain from deporting people to Iraq because of the human rights situation and the conflict there, said Jean-Nicholas Beuze, the organization's Canadian representative.

"The responsibility is on the state sending people back to those countries to make sure ... that those people will not become internally displaced within their own country and dependent on humanitarian aid," Beuze said.

In July, a U.S. judge temporarily blocked the deportation of more than 1,400 Iraqis, many with criminal charges or convictions. They had claimed they would face death or persecution if they return to their home country because they belonged to minority groups, including Chaldean Catholics, Sunni Muslims or Iraqi Kurds.