Trump administration sued over 'unconstitutional' phone searches at US borders 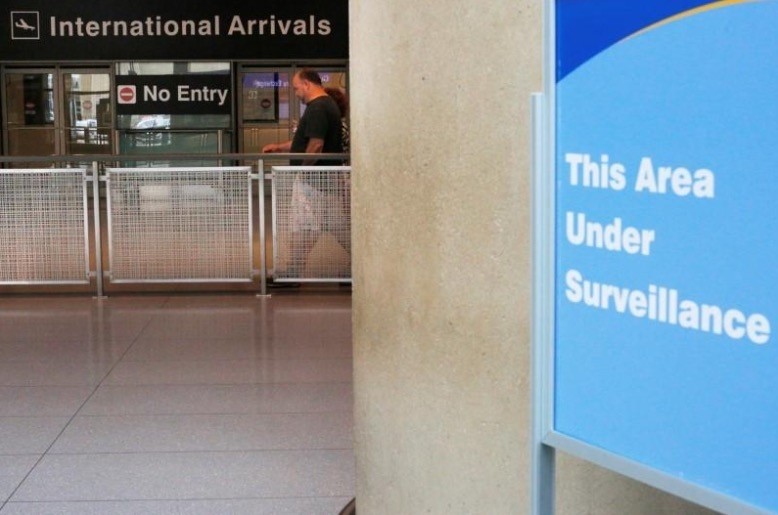 A sign warns of surveillance at the International Arrival area at Logan Airport in Boston. (Reuters Photo)
by Sep 13, 2017 12:00 am

The Trump administration has engaged in an unconstitutional practice of searching without a warrant the phones and laptops of Americans who are stopped at the border, a lawsuit filed on Wednesday alleged.

Ten U.S. citizens and one lawful permanent resident sued the Department of Homeland Security in federal court, saying the searches and prolonged confiscation of their electronic devices violate privacy and free speech protections of the U.S. Constitution.

The lawsuit comes as the number of searches of electronic devices has surged in recent years, alarming civil rights advocates.

The suit, filed in a U.S. District Court in Massachusetts, is being brought by travelers including a military veteran, a NASA engineer, two journalists and a computer programmer. The Electronic Frontier Foundation and the American Civil Liberties Union, who are representing the travelers, said that several of the plaintiffs are Muslim or minorities.

Suhaib Allababidi, a U.S. citizen who lives in Texas and a plaintiff in the case, said in an interview that he was stopped by Customs and Border Patrol on Jan. 21 at the Dallas airport after returning from a business trip to Dubai.

Allababidi said he declined to unlock his personal phone for the officers after allowing them to search his separate business phone.

The officers confiscated both his phones, Allababidi said, and returned his business phone to him two months later. The government has still not returned his personal phone after more than seven months, he said.

"You are left in the dark with no answers," Allababidi said. "Will I get my phone back, did I do anything wrong? ... They took my phone, and that's all I know."

Generally, U.S. law enforcement is required to obtain a warrant before it can search an American's electronic devices.

But a so-called border search exception allows federal authorities to conduct searches within 100 miles (160 km) of a U.S. border without a warrant.

In April, Democratic Senator Ron Wyden and Republican Senator Rand Paul introduced legislation that would require a warrant before federal agents search devices at the border that belong to a U.S. citizen or permanent resident, except in some emergency circumstances.