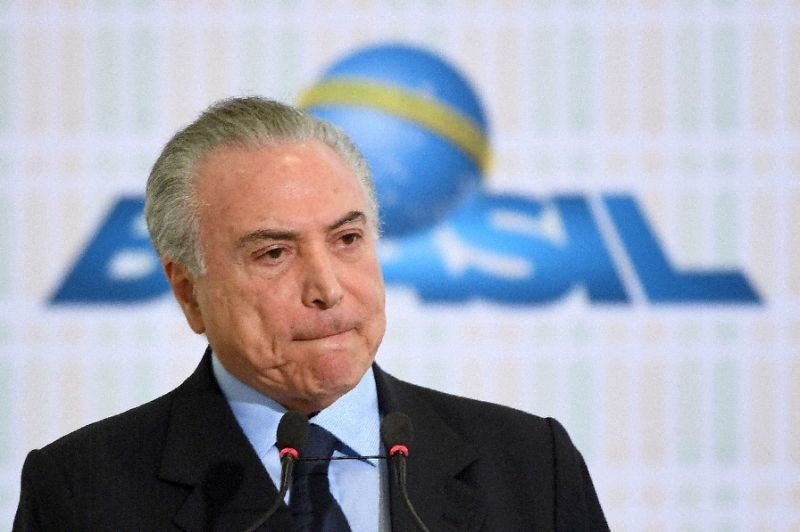 Brazilian President Michel Temer during the launching of the National Volunteer Program at Planalto Palace in Brasilia, on August 28, 2017 (AFP Photo)
by Sep 15, 2017 12:00 am

Brazil's chief prosecutor on Thursday charged President Michel Temer with obstruction of justice and leading a criminal group in the biggest climax yet to the country's ever-growing corruption scandal.

The alleged corruption ring operated from May 2016, when Temer first took over from leftist president Dilma Rousseff following her impeachment, Janot's office said.

The prosecutor's office said Temer also obstructed justice by attempting to pay bribes to prevent businessman Lucio Funaro -- an alleged middleman in the bribery -- from testifying against him under a plea deal with prosecutors.

The criminal charges must be first accepted by the Supreme Court before being sent for debate in the lower house. If the house accepts the charges and a trial starts, Temer would be suspended for 180 days, pending the result.

However, the president is widely thought to have enough support in Congress to avoid being forced to trial, allowing him to finish his term at the end of 2018.

Janot had already charged Temer with bribe-taking in June but the lower house of the legislature voted overwhelmingly to throw out the charge, preventing him from being tried at the Supreme Court.

"The second round of corruption charges against President Michel Temer is likely to be handily rejected," Eurasia Group said in an analysis note.

The charges are part of an onslaught by prosecutors against Brazil's corruption-riddled elite in which dozens of politicians and executives have been convicted or are being charged in embezzlement and bribery schemes.

Temer's rightwing allies are faring no better. About a third of his cabinet is being probed.

There has been even greater urgency in recent days as the hard-hitting Janot winds down his term as chief prosecutor, with his last day at work Sunday.

Just on Thursday, police raided the home of wealthy Agriculture Minister Blairo Maggi, who is accused of obstructing justice, and a day earlier they arrested Wesley Batista, CEO of the world's biggest meatpacker, JBS.

In a last-ditch bid to stop Janot, Temer's lawyers appealed to the Supreme Court to have him taken off the case for alleged bias, but on Wednesday the court ruled 9-0 to keep the prosecutor.

The latest charges broaden their scope to Temer's inner party circle and will tarnish his reputation even further.

According to prosecutors, their criminal group amassed "at least 587 million reais ($189 million)" in kickbacks.

Two of those charged along with Temer were key ministers and political allies Eliseu Padilha and Moreira Franco.

Another was a former minister, Geddel Vieira Lima, who was imprisoned last week after police discovered the equivalent of $16 million in cash stuffed into boxes and suitcases in an apartment he used.

One of the keys to the prosecutors' obstruction of justice case has been plea deal evidence from JBS executive Joesely Batista, brother of Wesley Batista. They agreed to cooperate with investigators after admitting that their company had bribed no less than 1,900 politicians.

It was Joesely Batista who met with Temer at his Brasilia residence in March and secretly recorded the president allegedly discussing payment of hush money to prevent former allies from testifying against him. Temer denies that the recording shows anything incriminating.

However, the plea deal testimony from both Batista brothers is being challenged by Temer's lawyers at the Supreme Court in the wake of revelations that Joesley Batista withheld information from prosecutors.

That led to the leniency agreement signed with the brothers being stripped and Joesley Batista being arrested Sunday.

Wesley was arrested Wednesday on suspicion of insider trading to profit from the market upheaval created by the scandal.