"We've lost all what money can buy and replace": Hurricane Maria devastates Dominica 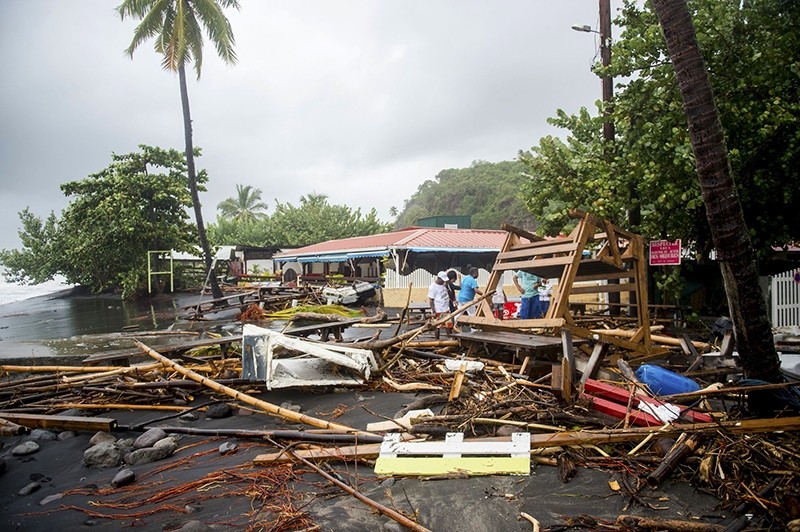 People stand next to debris at a restaurant in Le Carbet, on the French Caribbean island of Martinique, after it was hit by Hurricane Maria, on September 19, 2017. (AFP Photo)
by Compiled from Wire Services Sep 19, 2017 12:00 am

Hurricane Maria smashed into the Caribbean island of Dominica with 160 mph winds, ripping the roof off even the prime minister's residence and causing what he called "mind-boggling" devastation Tuesday as it plunged into a Caribbean region already ravaged by Hurricane Irma.

The storm was on a track to wallop Puerto Rico on Wednesday "with a force and violence that we haven't seen for several generations," the territory's governor said.

Dominica Prime Minister Roosevelt Skerrit sent a series of dramatic posts on his Facebook page as the storm blew over the tiny country Monday night — but then stopped suddenly as phone and internet connections with the country seemed to drop.

"So far we have lost all what money can buy and replace," Skerrit wrote on Facebook.

"My greatest fear for the morning is that we will wake to news of serious physical injury and possible deaths as a result of likely landslides triggered by persistent rains," he said.

"The winds have swept away the roofs of almost every person I have spoken to or otherwise made contact with," he continued. "The roof to my own official residence was among the first to go."

And he appealed for international aid:

Fierce winds and rain lashed mountainous Dominica for hours. A police official on the island, Inspector Pellam Jno Baptiste, said late Monday night that there were no immediate reports of casualties but it was too dangerous for officers to check conditions.

"Where we are, we can't move," he said in a brief phone interview while hunkered down against the region's second Category 5 hurricane this month.

"The winds are merciless! We shall survive by the grace of God," Skerrit wrote at the start of a series of harrowing posts on Facebook.

A few minutes later, he messaged he could hear the sound of galvanized steel roofs tearing off houses on the small rugged island.

He then wrote that he thought his home had been damaged, and added: "Rough! Rough! Rough!"

Akamai Technologies, a company that tracks the status of the internet around the world, said most of Dominica's internet service appeared to be down at midday. It reported seeing small spikes of activity, but far less than normal.

The company said it's possible that the island's electrical system was down.

The Ross University School of Medicine in Dominica reported a widespread loss of communication on the island, and relatives of students posted messages on its Facebook page saying they had been unable to talk to students since late Monday evening as the storm approached.

Officials on the neighboring French island of Guadeloupe reported at least one death: a person hit by a falling tree. They said two other people were reported missing after their boat sank off La Desirade island, just east of Guadeloupe.

About 40 percent of the island — 80,000 homes — was without power and flooding was reported in several communities.

The Dominican Republic, the east coast of which was battered by Irma, ordered citizens in part of the north to evacuate ahead of Maria's arrival, expected Wednesday.

St Kitts, Nevis, the British island of Montserrat, Culebra and Vieques were also on alert.

Martinique, a French island south of Dominica, suffered power cuts but avoided major damage as the storm skirted its shores.

Flooding, mudslides and power outages were also reported in parts of St Lucia. 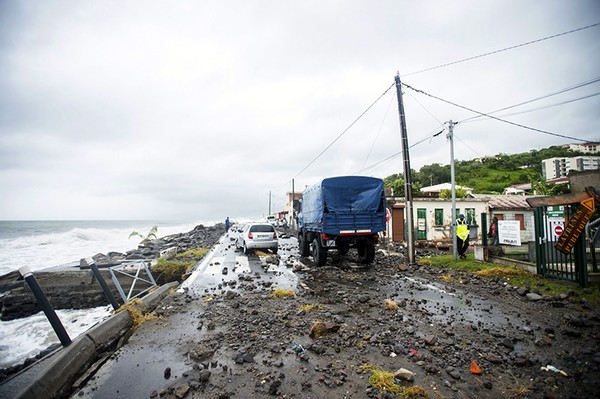 U.S. Virgin Islands Gov. Kenneth Mapp warned that the projected track of the storm has shifted and the eye was now expected to pass over the southwestern tip of St. Croix, with entire island experiencing the full brunt of hurricane-force winds, which extend out 30 miles.

"Folks this is an extremely, extremely dangerous hurricane and it continues to inch its way onto St. Croix," Mapp said at a news conference.

It comes just after Hurricane Irma passed over the islands of St. John and St. Thomas to the north but largely spared St. Croix.

Authorities in the U.S. territory of Puerto Rico, which faced the possibility of a direct hit, warned that people in wooden or flimsy homes should find safe shelter before the storm's expected arrival there on Wednesday.

"You have to evacuate. Otherwise, you're going to die," said Hector Pesquera, the island's public safety commissioner. "I don't know how to make this any clearer."

Maria had maximum sustained winds of 160 mph (260 kph) late Monday when it slammed into Dominica.

The U.S. National Hurricane Center said Maria weakened briefly before recovering sustained winds of 160 mph (260 kph). Its eye was located about 150 miles (240 kilometers) southeast of St. Croix Monday morning and was moving west-northwest over the Caribbean at 10 mph (17 kph).

Forecasters warned Maria would remain a Category 4 or 5 storm until it moves over the Virgin Islands and Puerto Rico.

Forecasters said storm surge could raise water levels by 6 to 9 feet (1.8 to 2.7 meters) near the storm's center. The storm was predicted to bring 10 to 15 inches (25 to 38 centimeters) of rain across the islands, with more in isolated areas.

Barry University said it chartered a private plane to carry students and staff from its St. Croix facility to Florida in preparation for Maria. It said 72 people connected to the Barry's Physician Assistant Program and a few pets were on Monday's evacuation flight.

Gov. Ricardo Rossello said Puerto Rico had 500 shelters capable of taking in up to 133,000 people in a worst-case scenario. He also said the Federal Emergency Management Agency was ready to bring drinking water and help restore power immediately after the storm.

"This is going to impact all of Puerto Rico with a force and violence that we haven't seen for several generations," he said. "We're going to lose a lot of infrastructure in Puerto Rico. We're going to have to rebuild."

Rossello warned that an island-wide power outage could last a "long time" given the power company's deteriorated and weak infrastructure.

To the north, Hurricane Jose stirred up dangerous surf and rip currents along the U.S. East Coast, though forecasters said the storm was unlikely to make landfall. Big waves caused by Jose swept five people off a coastal jetty in Rhode Island and they were hospitalized after being rescued.

Irma, also a Category 5 hurricane, left around 40 people dead in the Caribbean before churning west and pounding Florida, where the death toll stood at 50 Monday.

It broke weather records when it whipped up winds of 295 kilometers per hour for more than 33 hours straight.

Another hurricane, Jose, is also active in the Atlantic and has triggered tropical storm warnings for the northeastern United States.

Many scientists are convinced that megastorms such as Irma, and Harvey before it, are intensified by the greater energy they can draw from oceans that are warming as a result of climate change.