Frida, 4-legged heroine of Mexico's quake to the rescue 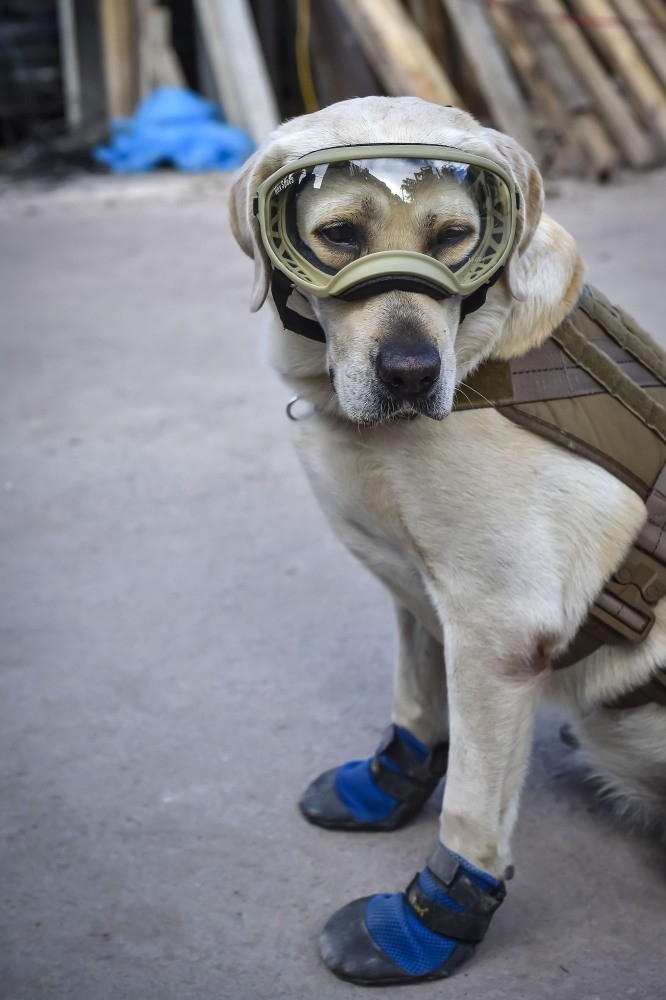 Frida, a rescue dog belonging to the Mexican Navy, takes a break while participating in efforts to search for people trapped at the Rebsamen school in Mexico City.
by Sep 25, 2017 12:00 am

With protective goggles fitted under her furry ears and boots on all four paws, Frida wags her tail as she scales the mountains of rubble left by this week's devastating earthquake in Mexico.

The golden labrador is using her sense of smell to try to detect any survivors left in the wreckage of buildings brought down on Tuesday by the 7.1-magnitude earthquake.

The courageous canine has become iconic in Mexico, a four-legged symbol of the solidarity behind the rescue operations whose fame has been spread on television and social media.

One man in Mexico's northeast has even had her image tattooed on his arm. And a t-shirt maker is selling a line with her face above the slogan "We can be heroes."

The dog is part of the Canine Unit of Mexico's Navy, which has been active at the sites of 39 buildings brought down in the quake.

Frida was notably deployed at a collapsed school in the capital's south where 19 children and six adults died. Officials say there is still the possibility that an adult is trapped alive in the debris.

In her career, which included being sent to Ecuador for a major earthquake last year, she has saved 12 lives, he said.

When she turns up, many Marines drop their stern military demeanor to rush to pet her and have a photo taken alongside her.

"She brings joy, tenderness and hope. Civilians salute her and applaud her in the street," said one soldier as he rubbed her belly.

The dog's personality is "very gentle, but also very strong temperamentally," Arauz said, adding that she would likely be retired next year when she turns eight.

"For me, it's an honor to handle her on these missions," he said.

The spontaneous display of solidarity in Mexico against natural disasters has been a source of surprise and inspiration internationally.

Media around the world covering this week's quake have highlighted the generosity of Mexicans who have donated food, medicine and basic supplies, as well as the volunteers who have leaped forward to help professional emergency crews to remove rubble.

That same rush to help can be seen with dog-owners.

"We have come to support the UNAM brigade to detect people and rescue them," said Jean Louis Zuniga, an amateur dog trainer who turned up at a collapsed building with several of his charges, including a labrador, a border collie, a boxer and a pitbull.

But dogs weren't only part of the rescue teams - they were also among the quake's victims. Several died, others became trapped in the rubble after losing their owners or becoming injured.

Many have been rescued, with some being hauled out of windows on ropes.

There are also free veterinarian clinics dotted around the city to look after injured animals, and centers dispensing dog food and medicine.

"I'm so desperate, I am looking for my Candy," said Cecilia Vega, a university student ceaselessly going to each center, with a photograph in hand of her chihuahua missing since the earthquake.

"She's called Precious and she got lost during the earthquake. She has problems breathing and is skittish," read one posting on the Twitter feed of @MascotasSismo (translated as QuakePets), under the image of a white dog with the tongue hanging out.

"Back with his owners!" read another, showing Brook, a grey pitbull.