You've thrown our budget a little out of whack, Trump tells Puerto Ricans 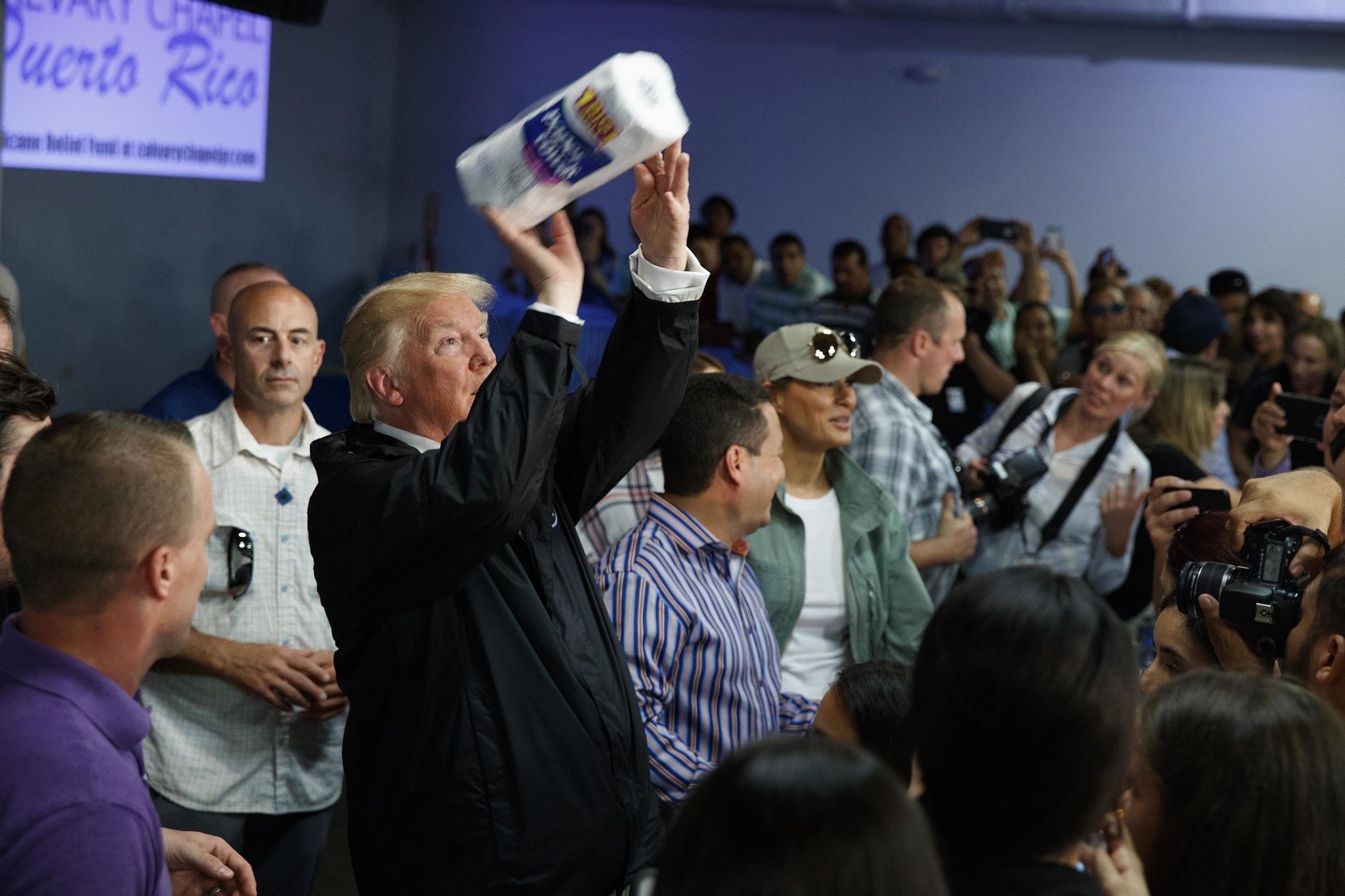 President Donald Trump tosses paper towels into a crowd as he hands out supplies at Calvary Chapel, Tuesday, Oct. 3, 2017, in Guaynabo, Puerto Rico. (AP Photo)
by Associated Press
Oct 03, 2017 12:00 am

Confronting Puerto Rico's devastation nearly two weeks after Hurricane Maria, President Donald Trump highlighted the island's relatively low death toll compared with "a real catastrophe like Katrina" as he opened a tour of the island Tuesday by focusing on the best of the reviews he and his administration are getting for the federal response.

Trump pledged an all-out effort to help the island but added: "Now I hate to tell you, Puerto Rico, but you've thrown our budget a little out of whack because we've spent a lot of money on Puerto Rico. And that's fine. We've saved a lot of lives."

He said his visit was "not about me" but then praised local officials for offering kind words about the recovery effort and invited one to repeat the "nice things" she'd said earlier. Trump also singled out Gov. Ricardo Rossello for "giving us the highest praise."

In Washington, Rep. Luis Gutierrez, D-Ill., noted that many people in more remote areas still in dire straits and in need of food and water. He told CNN, "Let's stop talking about the death count until this is over."

The most prominent critic in Puerto Rico, San Juan Mayor Carmen Yulin Cruz, attended Trump's first event, in an airport hangar, shaking Trump's hand as he went around a table greeting officials before sitting in in the shadow of a hulking, gray military plane.

"How are you?" he asked. Her response could not be heard. He thanked her. Days earlier, Cruz said the Trump administration was "killing us with the inefficiency," pleading for more effective federal leadership in the crisis.

Air Force One brought the president, first lady Melania Trump and aides to Puerto Rico in late morning. They were expected to spend more than five hours on the ground, meeting first responders, local officials and some of the 3.4 million people whose lives have been upended by a hurricane that, in the president's words, left the island U.S. territory "flattened."

At least parts of the itinerary were drawn to ensure a friendly reception: Trump was visiting the houses of pre-selected families waiting on their lawns.

The president also handed out flashlights at a church, where 200 people cheered his arrival and crowded around him getting pictures on their cellphones.

Asked by AP what he has to say to people still without power, food and water, he spoke of the generators brought to the island and said the electrical grid is being fixed.

"Again the job that's been done here is really nothing short of a miracle," he said.

Some 95 percent of electricity customers remain without power, including some hospitals.

On approach to the airport, Air Force One descended over a landscape marked by mangled palm trees, metal debris strewn near homes and patches of stripped trees, yet with less devastation evident than farther from San Juan.

At least in his first moments on the island, Trump remained focused primarily on drawing praise. "He didn't play politics at all," he said of the governor, making clear that he considers those who have criticized him to be politically driven. Trump misstated Maria as a Category 5 hurricane; it was Category 4 when it hit Puerto Rico.

"I appreciate your support and I know you appreciate ours," he said. "Our country has really gone all out. It's not only dangerous, it's expensive. But I consider it a great honor."

Before leaving Washington, he said Puerto Ricans who have called the federal response insufficient "have to give us more help."

Large-scale protests against Trump, talked about in advance, failed to materialize by early afternoon, with only a few knots of people gathering around San Juan to decry his criticism of local politicians.

As he headed out from the White House to visit the island, Trump told reporters that "it's now acknowledged what a great job we've done."

The trip is Trump's fourth areas battered by storms during an unusually violent hurricane season that has also seen parts of Texas, Florida, Louisiana and the U.S. Virgin Islands inundated by floodwaters and hit by high winds.

Nearly two weeks after the Puerto Rico storm, much of the countryside is still struggling to access such basic necessities as food, fresh water and cash.

Trump's visit follows a weekend in which he aggressively pushed back against critics, including Cruz. Trump responded angrily on Twitter, deriding the "poor leadership ability by the Mayor of San Juan, and others in Puerto Rico, who are not able to get their workers to help."

"They want everything to be done for them when it should be a community effort," he added, scoffing at "politically motivated ingrates" who had criticized the federal work, and insisting that "tremendous progress" was being made.

Cruz had begged the administration to "make sure somebody is in charge that is up to the task of saving lives."

Trump and his wife were to meet Navy and Marine Corps personnel on the flight deck of the USS Kearsarge as well as the governor of the U.S. Virgin Islands.

Even before the storm hit on Sept. 20, Puerto Rico was in dire condition thanks to a decade-long economic recession that had left its infrastructure, including the island's power lines, in a sorry state. Maria was the most powerful hurricane to hit the island in nearly a century and unleashed floods and mudslides that knocked out the island's entire electrical grid and telecommunications, along with many roads.

Trump and other administration officials have worked in recent days to reassure Americans that recovery efforts are going well and combat a perception that the president failed to fully grasp the magnitude of the storm's destruction in its immediate aftermath.

While early response efforts were hampered by logistical problems, officials say that conditions, especially in the capital, have improved.

According to the Federal Emergency Management Agency, there are now more than 10,000 federal officials on the ground on the island, and 45 percent of customers now have access to drinking water. Businesses are also beginning to re-open, with 60 percent of retail gas stations now up and running.

The Health and Human Services Department says federal medical teams with their own equipment and supplies have been sent to help provide care at Centro Medico, a major trauma center in San Juan. Additional teams have been sent to five hospitals in other parts of the island.

The department has also placed a liaison in each hospital that's open, to make sure the facilities can get timely shipments of fuel needed to keep generators running, as well as medical supplies.

For many, however, Washington's response isn't enough. On Monday, the nonprofit relief group Oxfam announced that it would be taking the rare step of intervening in an American disaster, citing its outrage over what it called a "slow and inadequate response."