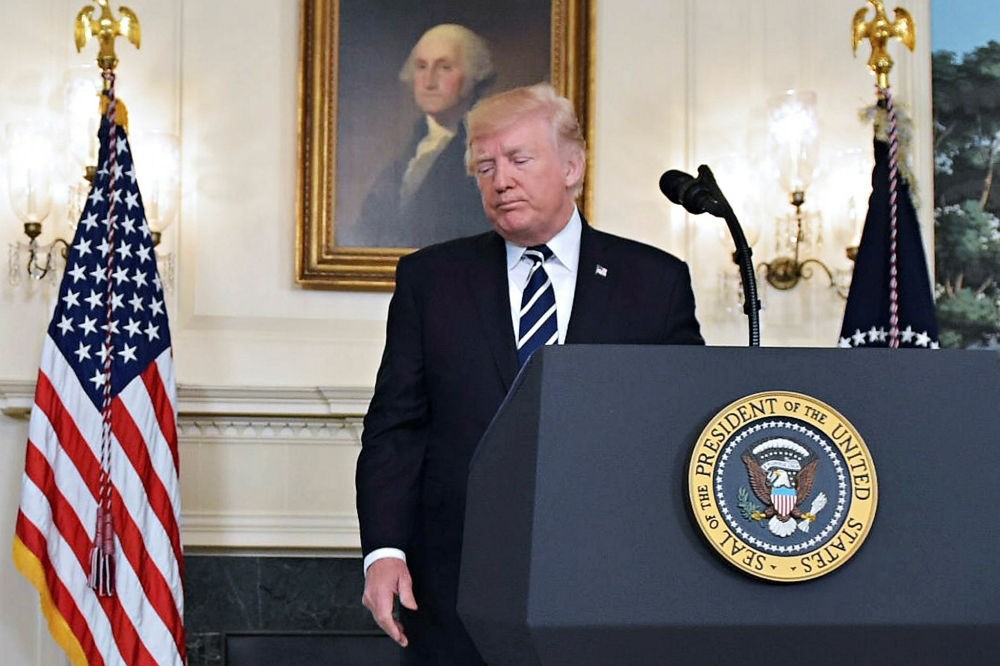 President Donald Trump talks from the Diplomatic Reception Room of the White House in Washington, Oct. 2.
by Compiled from Wire Services Oct 04, 2017 12:00 am

President Trump refrained from addressing calls for gun control or the motives for the deadliest mass shooting in the U.S. as the country has long struggled with ongoing gun violence

Amid continuing gun violence in the U.S., President Trump went silent on gun control after the deadly mass shooting in Las Vegas. Trump spoke to reporters yesterday as he departed for a trip to hurricane-ravaged Puerto Rico. Asked about gun laws, the president said, "we'll be talking about gun laws as time goes by." He called the gunman "demented" and said "we're looking into him very seriously." Trump also praised the Las Vegas police, saying they had done an "incredible job."

Delivering televised remarks on Monday, Trump tried to offer consolation and called for unity - an act that has become a grim rite of passage for modern U.S. presidents. Trump ordered that flags be flown at half-staff until sunset Friday and offered prayers for the victims.

Trump spoke hours after a gunman on the 32nd floor of a Vegas Strip casino opened fire on people at an outdoor country music festival below. The gunman, 64-year-old Stephen Craig Paddock, killed himself in the hotel room before authorities arrived.

White House Press Secretary Sarah Huckabee Sanders said that now was not the time for politics, a tactic frequently used by gun advocates to diffuse public outrage. "There's a time and place for a political debate, but now is the time to unite as a country," said Sanders.

Trump insisted, "our unity cannot be shattered by evil. Our bonds cannot be broken by violence."

Barack Obama wept as he tried to soothe the nation after the 2012 Sandy Hook primary school shooting, George W. Bush told Americans that the "nation grieves" after a similar outrage at Virginia Tech university.

The country has long suffered from gun violence as it is 11 times higher than the rate of any other developed country, according to a 2014 study published in the International Journal of Criminal Justice Sciences, the Guardian reported.

There have already been over 270 mass shootings in the United States this year alone, according to www.massshootingtracker.org, although the exact definition is contested.

Gun violence accounts for more than 33,000 deaths each year in the United States, and according to the latest Gallup poll, 55 percent of American voters would like to see stricter rules for buying guns.

But the issue is highly sensitive and Trump's own views have changed markedly over his years in public life.

After the Sandy Hook Elementary School shooting, where 20 children aged 6 and 7 and six adults were mowed down by a disturbed 20-year-old, Trump appeared to favor stricter rules.

Back then, his predecessor Obama - who often called Sandy Hook the worst moment of his eight year presidency - called for the deadlock to be broken and for Congress to act.

At that time Trump tweeted: "President Obama spoke for me and every American in his remarks in #Newtown Connecticut."

But since then Trump, whose White House bid was endorsed by the National Rifle Association (NRA), has positioned himself as a defender of the constitutional "right to keep and bear arms."

The NRA donated an estimated $30 million to Trump's campaign in 2016, according to the Center for Responsive Politics.

U.S. Senator Chris Murphy, who was the congressman for Sandy Hook, renewed a call for action in the wake of the Las Vegas attack.

"This must stop. It is positively infuriating that my colleagues in Congress are so afraid of the gun industry that they pretend there aren't public policy responses to this epidemic," he said.