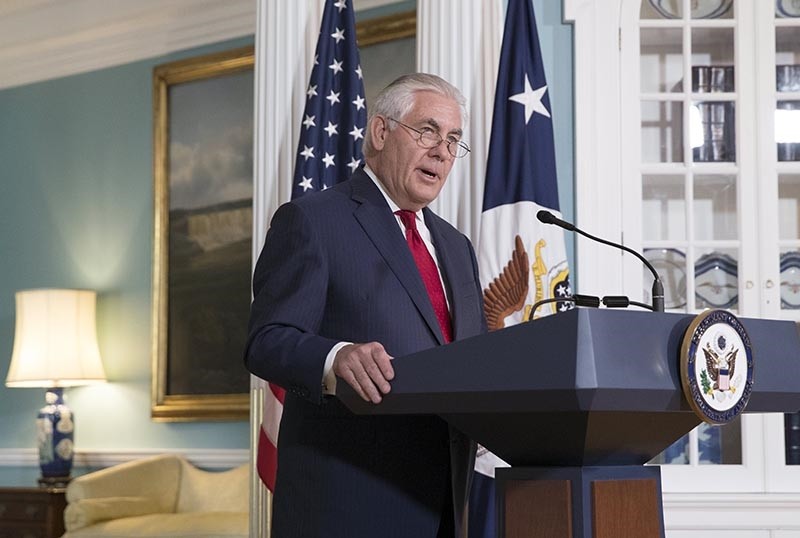 US Secretary of State Rex Tillerson delivers remarks at the State Department in Washington, DC, USA, 04 October 2017 (EPA Photo)
by Compiled from Wire Services Oct 04, 2017 12:00 am

U.S. Secretary of State Rex Tillerson declared Wednesday that he never considered abandoning his job as President Donald Trump's top diplomat, disputing what he called "erroneous" reports that he was on the verge of resigning earlier this year.

Tillerson, however, didn't deny a story that he had called the president a "moron" after a contentious July 20 meeting at the Pentagon.

"We don't deal with that kind of petty nonsense," Tillerson said. "I'm just not going to be part of this effort to divide this administration."

"There has never been a consideration in my mind to leave," Tillerson said at a hastily arranged news conference at the State Department.

Tillerson said he wanted to address a report published earlier Wednesday saying he had intended to resign from his post a few months ago.

According to the report by NBC News, Tillerson referred to Trump as a "moron" after a July 20 meeting at the Pentagon with members of Trump's national security team and Cabinet officials. The broadcaster based its story on three unidentified officials familiar with the incident.

There had been speculation about Tillerson's relationship with Trump since the two appeared to clash over the weekend when Trump undermined his effort to make contact with North Korea over its nuclear and missile tests.

After Tillerson was quoted saying he had attempted to open dialogue with North Korea, Trump said on Twitter he told Tillerson he is "wasting his time trying to negotiate with Little Rocket Man," a reference to North Korean leader Kim Jong Un.

In his statement Wednesday, Tillerson said he has learned that Trump loves his country, puts Americans first, is smart and demands results.

Trump responded to Tillerson's statement on Twitter, saying: "The @NBCNews story has just been totally refuted by Sec. Tillerson and @VP Pence. It is #FakeNews. They should issue an apology to AMERICA!"