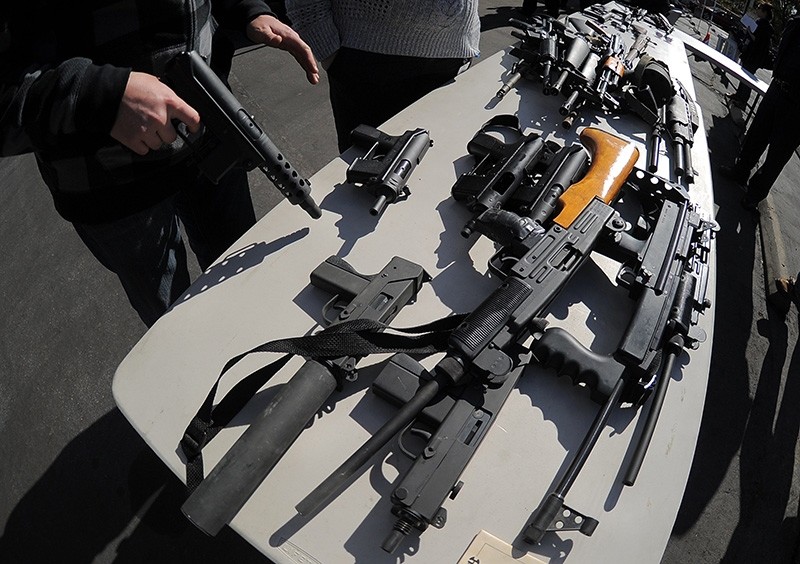 An LAPD officer stands before collected assault weapons during the LAPD Gun Buyback Program event in the Van Nuys area of north Los Angeles, on December 26, 2012. (AFP Photo)
by Daily Sabah Oct 05, 2017 12:00 am

The National Rifle Association (NRA) added its support for a review the device's legality, a rare break from its resolute pro-gun position.

"The NRA believes that devices designed to allow semi-automatic rifles to function like fully-automatic rifles should be subject to additional regulations," NRA leaders Wayne LaPierre and Chris Cox wrote in a statement.

Bump stocks were deemed legal in 2010, intended to aid people with limited hand mobility to fire semi-automatic weapons with a single trigger pull.

Despite increasing scale and frequency of gun-related tragedies, gun control continues to be a contested issue in American politics and society. Gun rights supporters have long stood by Article 2 of the Constitution's Bill of Rights, which states the right to acquire weapons.

According to the Center for Responsible Politics, Republicans have recently received $54 million in support from the NRA compared to $265 received by Democrats.

However, tragedies like the Los Vegas incident and last June's Orlando night club shooting may be softening public support of gun rights.

According to Pew Research's latest data, 47 percent of Americans continue to support the right to acquire weapons, while 51 percent favor arms control.