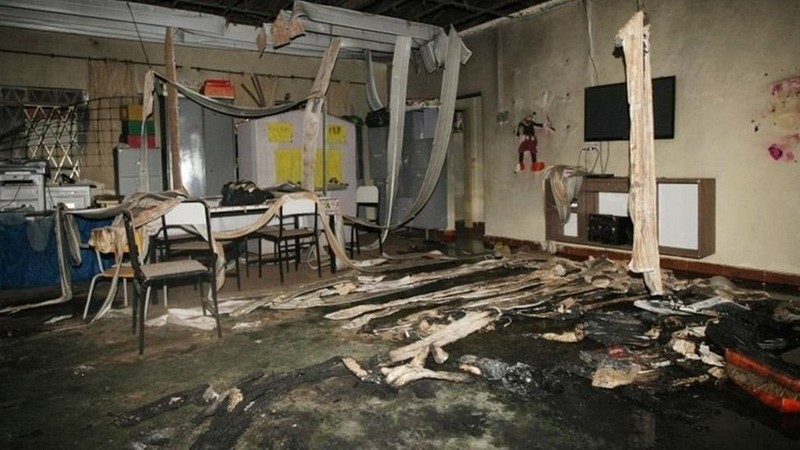 A Brazilian nursery school guard burned six small children and a teacher to death after spraying them with alcohol and setting them alight Thursday in an attack which has horrified the nation.

Dozens of people were also hurt in the blaze while the guard, who was reported to be mentally ill, died after succumbing to his own burn injuries.

The tragedy occurred in a modest quarter of Janauba, a city of 70,000 about 600 kilometers (370 miles) north of Belo Horizonte city.

The initial death toll of four rose to six when two badly burned children died, according to news reports which quoted fire officials.

About 50 people were hospitalized with injuries, said Bruno Ataide Santos, director of the hospital.

The guard, who was aged about 50 and identified as Damiao Soares, died in hospital several hours after the incident, which left him with burns all over his body, Santos told Agence France-Presse (AFP).

About 80 children were in the nursery school when the attack occurred, prompting terrified parents to rush to the school, where they found one classroom reduced to ashes.

"As the crèche is near our house we heard noise and rushed over," Nelson de Jesus Silva, the father of one victim, told Globonews TV.

"My little girl was so good, so smart," he said of his dead daughter Ana Clara Ferreira.

"I was thinking of changing nursery schools because we are preparing to move. I woke him up early to bring him here and when I saw him again he was dead in the hospital," Kelly said between sobs.

Police visited the home of the suspect and his family members to try to determine a motive.

But police superintendent Renato Nunes told the website of the Hoje em Dia newspaper that the guard had had mental health problems since 2014.

The guard had worked nights for at least eight years at the nursery school, where he was not directly in contact with the children.

"This could have been worse because the babies' room was in the hall next door. Evacuation would have been more difficult. As the children were bigger a lot of them were able to escape," the mayor explained.

Police searched the guard's home and found many jugs of alcohol. He reportedly told his family this week -- which includes the anniversary of the death of his father -- that he was going to give a "gift" to them and that he would die.

"I am deeply saddened by this tragedy involving children in Janauba, and I want to express my solidarity with the families," Temer wrote.

As the father of a school-age child, Temer said he understood "this must be an extremely painful loss" for the parents.