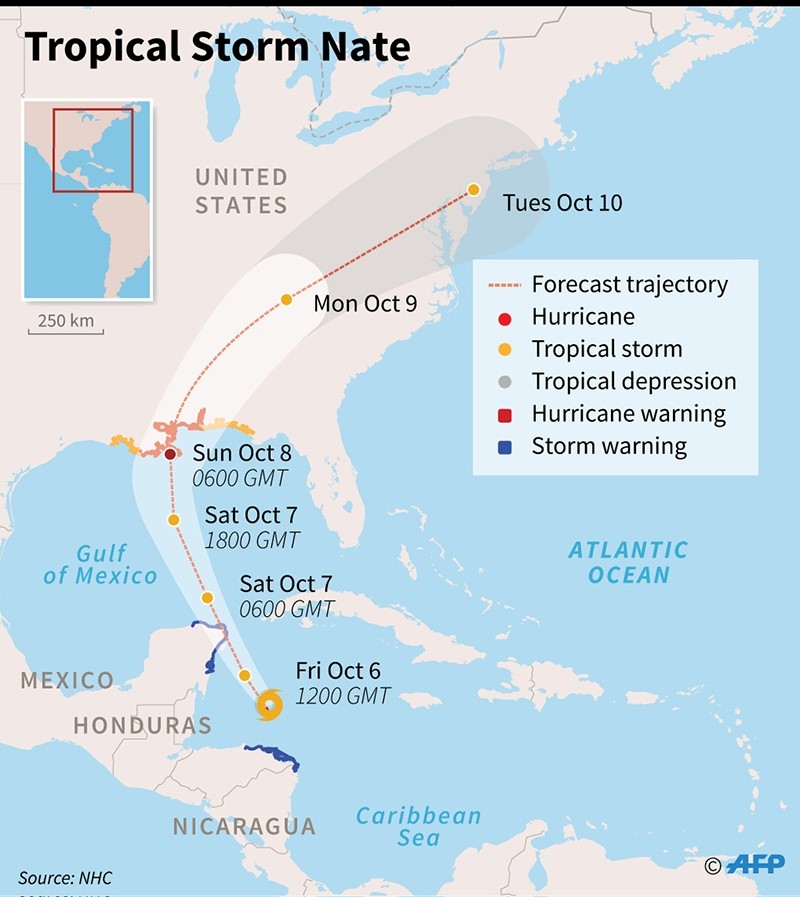 Hurricane Nate was bearing down on popular Mexican beach resorts and headed for the U.S. Gulf coast early Saturday after killing at least 22 people in Central America.

At 0330 GMT, the U.S. National Hurricane Center said the storm had top winds of 121 kilometers (75 miles) per hour, making it just strong enough to reach Category One strength. It was located about 95 miles west-northwest of the western tip of Cuba.

Louisiana and Mississippi officials declared states of state of emergency and Louisiana ordered some people to evacuate coastal areas and barrier islands ahead of its expected landfall Saturday night or early Sunday. Evacuations began at some offshore oil platforms in the Gulf.

Mississippi's government said it would open 11 evacuation shelters in areas away from the immediate coast, with buses available for people who can't drive.

The U.S. National Hurricane Center warned that Nate could raise sea levels by 4 to 7 feet (1.2 to 2.1 meters) from Morgan City, Louisiana, to the Alabama-Florida border. It had already had caused deadly flooding in much of Central America.

The storm had maximum sustained winds of 80 mph (128.74 kph) and was likely to strengthen over the Gulf of Mexico, reaching the U.S. Gulf coast near New Orleans late Saturday, according to the hurricane center.

The storm was located about 420 miles (675.89 kilometers) south-southeast of the mouth of the Mississippi River and was moving north-northwest at 22 mph (35 kph).

Authorities cancelled Friday afternoon classes in parts of Mexico's Caribbean coast state of Quintana Roo, where Cozumel and Cancun are located. But Gov. Carlos Joaquin said it appeared the storm would stay well offshore and not hit land, adding "that, I believe, is good news."

In Nicaragua, Nate's arrival followed two weeks of near-constant rain that had left the ground saturated and rivers swollen. Authorities placed the whole country on alert and warned of flooding and landslides.

Nicaragua's vice president and spokeswoman, Rosario Murillo, said that at least 11 people had died in that country due to the storm. Earlier Thursday she had said 15 people had died before later revising to say some of those were still counted as missing. She didn't give details on all the deaths, but said two women and a man who worked for the Health Ministry were swept away by a flooded canal in the central municipality of Juigalpa.

In Honduras, there were three dead and three missing, according to Oscar Triminio, spokesman for the country's firefighters.

Damage caused by the storm prompted Costa Rican officials to postpone a World Cup qualifying soccer match between that country and Honduras, which had been scheduled for Friday night.

In Louisiana, Gov. John Bel Edwards declared a state of emergency and mobilized 1,300 National Guard troops, with 15 headed to New Orleans to monitor the fragile pumping system there.

With forecasts projecting landfall in southeast Louisiana as a Category 1 hurricane, Edwards urged residents to ready for rainfall, storm surge and severe winds — and to be where they intend to hunker down by "dark on Saturday."

Louisiana's governor said Nate is forecast to move quickly, rather than stall and drop tremendous amounts of rain on the state. State officials hope that means New Orleans won't run into problems with its pumps being able to handle the water.

Edwards warned, however, against underestimating the storm.

The National Hurricane Center issued a hurricane warning from Grand Isle, Louisiana to the Alabama-Florida border.

Officials ordered the evacuation of part of coastal St. Bernard Parish east of New Orleans ahead of the storm. Earlier Thursday, a voluntary evacuation was called in the barrier island town of Grand Isle south of New Orleans.

New Orleans officials outlined steps to bolster the city's pump and drainage system. Weaknesses in that system were revealed during summer flash floods.

The Bureau of Safety and Environmental Enforcement's New Orleans office said in a news release that as of midday Thursday, six production platforms, out of the 737 manned platforms in the Gulf, had been evacuated. No drilling rigs were evacuated, but one moveable rig was taken out of the storm's path.

The agency estimated less than 15 percent of the current oil production in the Gulf of Mexico has been shut-in, which equates to 254,607 barrels of oil per day.