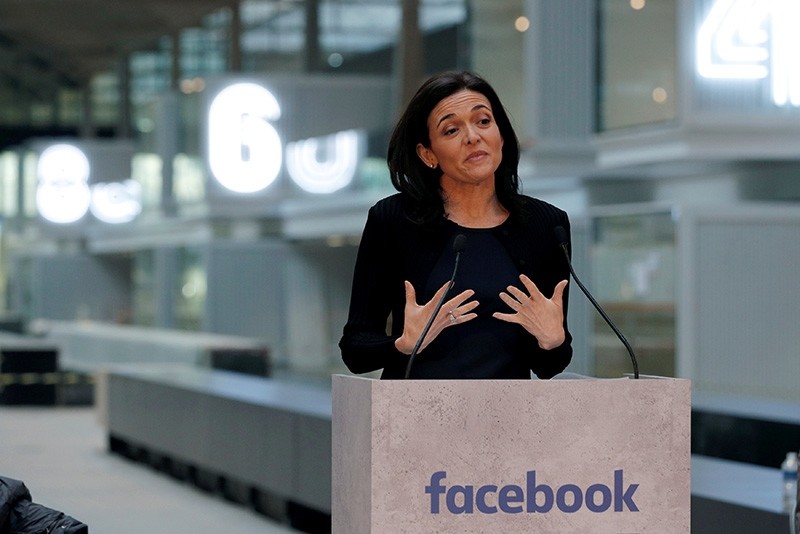 Sheryl Sandberg, Chief Operating Officer of Facebook, delivers a speech during a visit in Paris, France, on January 17, 2017. (Reuters Photo)
by Compiled from Wire Services Oct 12, 2017 12:00 am

"Things happened on our platform in this election that shouldn't have happened," Sandberg said during an interview in Washington with the Axios news website. "We told Congress and the intelligence committees that when they are ready to release the ads, we are ready to help them."

The live interview was the first by a senior Facebook executive since the social media giant last month told congressional panels investigating allegations of Russian meddling during the election that it had found 3,000 politically divisive ads believed to have been bought by Russia.

Facebook found the ads on its network and said they had appeared in the months preceding and following the election on Nov. 8.

Sandberg said she supported the public release of those ads, in addition to the pages they were connected to.

U.S. lawmakers have said they planned to release the ads placed on Facebook once any personal information on users is removed.

Last month, Facebook agreed to hand over the ads to congressional investigators in addition to special counsel Robert Mueller.

Information about how the ads were targeted toward specific kinds of users would also be released, Sanberg said.

Asked if Facebook contributed to Democratic candidate Hillary Clinton's defeat last year, Sandberg, an open Clinton supporter during the campaign, did not answer directly, but said it was important the website was "free from abuse" during any election in any country.

But Sandberg acknowledged the company had erred in how it handled the issue of foreign interference last year.

"It's not just that we apologize. We're angry, we're upset. But what we really owe the American people is determination" to do a better job of preventing foreign meddling," she said.

"We don't want this kind of foreign interference" on Facebook, Sandberg added. "Any time there is abuse on our platform, it troubles us. It troubles us deeply."

She said the company had been too permissive at times in terms of how advertisers are allowed to target users, and that Facebook did not want to allow ads that may be "discriminatory."

Still, Sandberg said it was important to protect "free expression" on the world's largest social network. If the Russian ads had been bought by legitimate accounts instead of fraudulent ones, many of them would have been allowed to run on the site, she said.

According to Facebook, some 10 million people may have viewed the ads placed by a Russian entity that appeared aimed at sowing division and mistrust.

Some 470 accounts spent a total of approximately $100,000 between June 2015 to May 2017 on ads that touted fake or misleading news, according to Facebook.