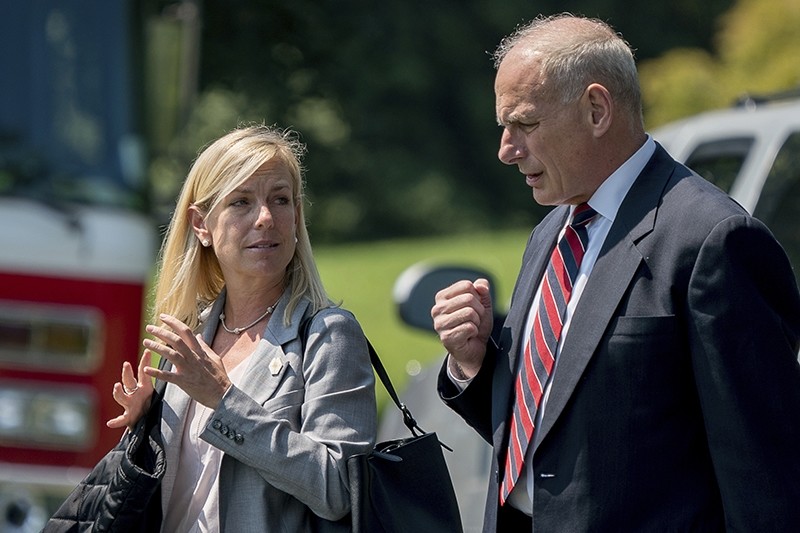 In this Aug. 22, 2017 photo, White House Chief of Staff John Kelly and Deputy Chief of Staff Kirstjen Nielsen speak together on the South Lawn of the White House in Washington. (AP Photo)
by Compiled from Wire Services Oct 12, 2017 12:00 am

U.S. President Donald Trump named security expert Kirstjen Nielsen to serve as the next secretary of homeland security on Wednesday after tapping the department's previous leader, John Kelly, to serve as White House chief of staff.

Nielsen served as Kelly's deputy at the Department of Homeland Security and followed him to the White House in July.

Nielsen served in the department during the George W Bush administration and also started a risk management firm.

Her focus has been on cyber security, infrastructure security and emergency management.

Elaine Duke had been serving as acting secretary of homeland security.

Trump named Kelly to White House chief of staff in late July as part of a staff shake-up as he ousted former chief of staff Reince Priebus. Kelly has reportedly sought to rein in operations at the White House, and Trump has already been forced to deny rumors that he could oust Kelly.

"The Chief is doing a FANTASTIC job for me and, more importantly, for the USA," Trump wrote on Twitter Tuesday.

Kelly, a former marine general, vacated the job when Trump chose him in July as his chief of staff in a bid to bring discipline to the White House.

DHS has been key to Trump's pledge to halt illegal immigration into the country, implemented his since-expanded "travel ban" that originally targeted visitors and immigrants from six majority-Muslim countries, and took charge of his promise to build a wall along the U.S.-Mexico border.

It was also central to the government's response to the recent hurricanes that blasted the Gulf of Mexico coastline, Florida, and Puerto Rico.

Nielsen was chosen after Trump reportedly considered and rejected several politicians for the job.

Representative Bennie Thompson, the senior Democrat on the House Homeland Security Committee, welcomed the nomination but expressed concern that some mistakes made in responding to recent hurricanes will go unaddressed.

"I... am fearful that DHS -- as well as this president -- has not learned all the lessons from that tragedy, given what we are seeing unravel in Puerto Rico and the U.S. Virgin Islands," he said in a statement.

"It is extremely important that the DHS Secretary stay above the partisan fray and not allow the position be a political pawn of the White House."

The agency was formed in response to the September 11, 2001 terrorist attacks and covers border security, customs, the coast guard and emergency management among other tasks.