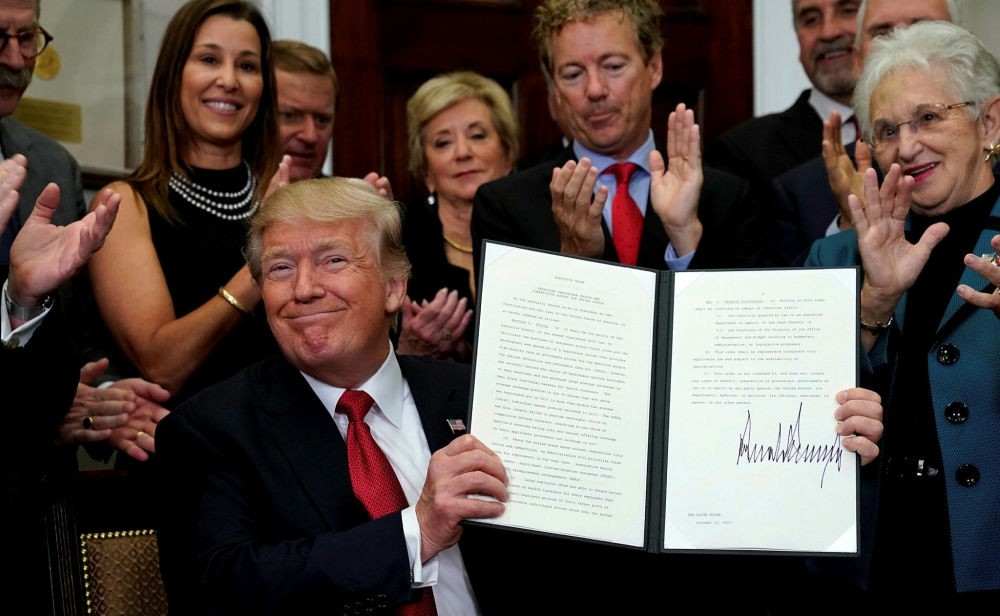 U.S. President Donald Trump smiles after signing an executive order at the White House in Washington, Oct. 12.
by Angelos Berberakis Oct 14, 2017 12:00 am

Obamacare was passed by Congress seven years ago in the hope that it would provide affordable healthcare for even some of the poorest Americans. Unfortunately, the plan has backfired, and has left tens of millions either paying more for the same healthcare plan, or, sometimes, paying even contemptible prices for a worse plan.

This is apparent in the skyrocketing of premiums for Obamacare which, in some states, have surpassed 100 percent, and in the case of Alaska, have soared over 200 percent. The states that are feeling less pressure regarding this issue are some of the richest, including Massachusetts and New Hampshire.

Another big problem with Obamacare is that today, one-third of all counties in the U.S. have only a single insurer selling coverage. It is expected that by 2018, this number will have gone up to include over half of the counties in the country.

Economically speaking, this is bad for the consumer, as it leaves them with no choices and also leads to a virtual oligopoly, if not a monopoly in terms of healthcare, to a few providers.

U.S. President Donald Trump believes that in order for prices to fall, a key component of that must be an extension of the free market, which means that the American citizen will have more than one option in healthcare, keeping prices and private companies in check.

On his first day in office, Jan. 20, President Trump signed an executive order to ease the burden of Obamacare, in a first step towards fulfilling one of his campaign promises, namely, "Repeal and Replace."

Since then, the Trump administration has attempted to pass legislation through Congress but failed to do so; due not only to Democratic opposition but also a handful of Republican naysayers, including Senator John McCain.

This is why the president decided to sign an executive order which will "provide millions of Americans with Obamacare relief."

"It directs the Department of Health and Human Services, the Treasury and the Department of Labor to take action to increase competition, increase choices and increase access to lower prices [and] higher quality healthcare options; and they will have so many options," President Trump said.

One of the most attractive parts of the executive order is the fact that, in the words of the president, it "will cost the U.S. government virtually nothing, and people will have great, great healthcare."

In terms of businesses, the executive orders aim to allow small businesses to form associations to buy "affordable and competitive health insurance," which means that business owners will have more flexibility in purchasing healthcare plans that their workers want.

Furthermore, Secretary of Labor Alexander Acosta has been instructed to expand these associations across state borders, so that companies may compete with each other from sea to shining sea.

It will also put small business owners on the same field with large corporations, ensuring that the latter does not hold any unfair advantages over the former.

"Insurance companies will be fighting to get every single person signed up," the president said, adding that this will mean lower prices for better plans.

"Today is only the beginning," the president concluded. "In the coming months, we plan to take new measures to provide our people with even more relief and more freedom; and, by the way, [regarding] another subject, that will include massive tax cuts."