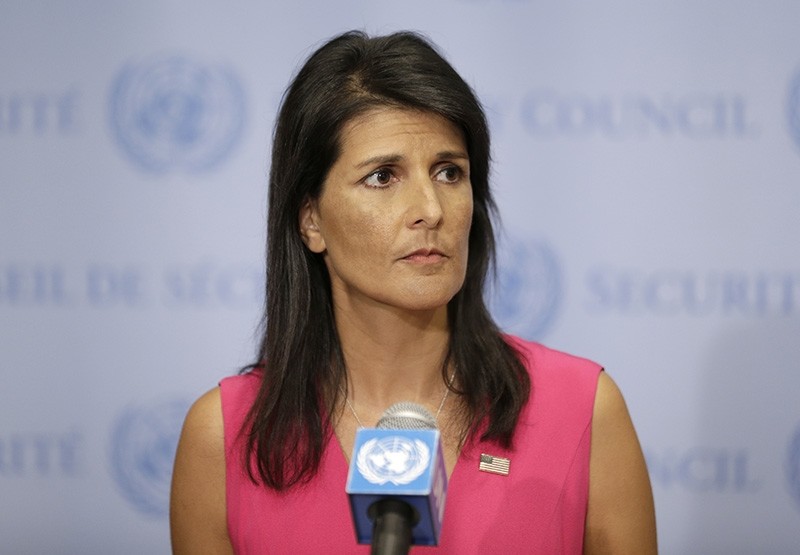 In this Friday, Aug. 25, 2017, file photo, United States Ambassador to the United Nations Nikki Haley speaks to reporters at U.N. headquarters. (AP Photo)
by Compiled from Wire Services Oct 19, 2017 12:00 am

Russia is using election interference as a "weapon of choice" to undermine democracy worldwide and must be held accountable for this "warfare," U.S. Ambassador to the United Nations Nikki Haley said Thursday.

"When a country can come and interfere in another country's elections, that is warfare, it really is," Haley told a panel discussion in New York organized by the George W. Bush institute.

"The Russians, God bless them, they're saying, 'Why are Americans anti-Russian? And why have we done the sanctions?' Well, don't interfere in our elections and we won't be anti-Russian," Haley said.

The U.S. Congress is looking into an alleged Russian campaign aimed at influencing the outcome of the 2016 election and a special counsel, Robert Mueller, has been appointed to oversee a federal investigation into the allegations.

Election interference is warfare "because you are making sure that the democracy shifts from what the people want," said Haley, seen as among the most influential members of President Donald Trump's administration.

"We have to be so hard on this," Haley said about the Russian role. "We have to hold them accountable."

"America has experienced a sustained attempt by a hostile power to feed and exploit our country's divisions," Bush declared. "The Russian government has made a project of turning Americans against each other."

"Foreign aggressions, including cyberattacks, disinformation and financial influence, should never be downplayed or tolerated," Bush said.

The Republican former president did not go after Trump by name, but he condemned some of the values Trump has championed during his rise to power.

"We've seen nationalism distorted into nativism, forgotten the dynamism that immigration has always brought to America," Bush said. "We see a fading confidence in the value of free markets and international trade, forgetting that conflict, instability and poverty follow in the wake of protectionism."

He added, "We need to recall and recover our own identity."

"We are being attacked in a new way, in a new system," said Albright, who also served as U.N. ambassador.

Hillary Clinton has pinned part of the blame for her loss to Trump in the November vote to Russian hacking of her campaign emails and use of social media. Moscow has denied the allegations.

Under pressure from investigators, Facebook agreed last month to hand over the content and targets of Russia-backed political messages on the social network in the 2016 election.

It recently provided three congressional committees with more than 3,000 ads they had traced to a Russian internet agency and told investigators of their contents. Twitter also briefed Congress last month and handed over to Senate investigators the profile names of 201 accounts linked to Russians.

Asked about threats facing the United States, Haley listed North Korea, Iran and the Daesh terror group in Iraq and Syria, but she also discussed Russia's role in sowing instability.