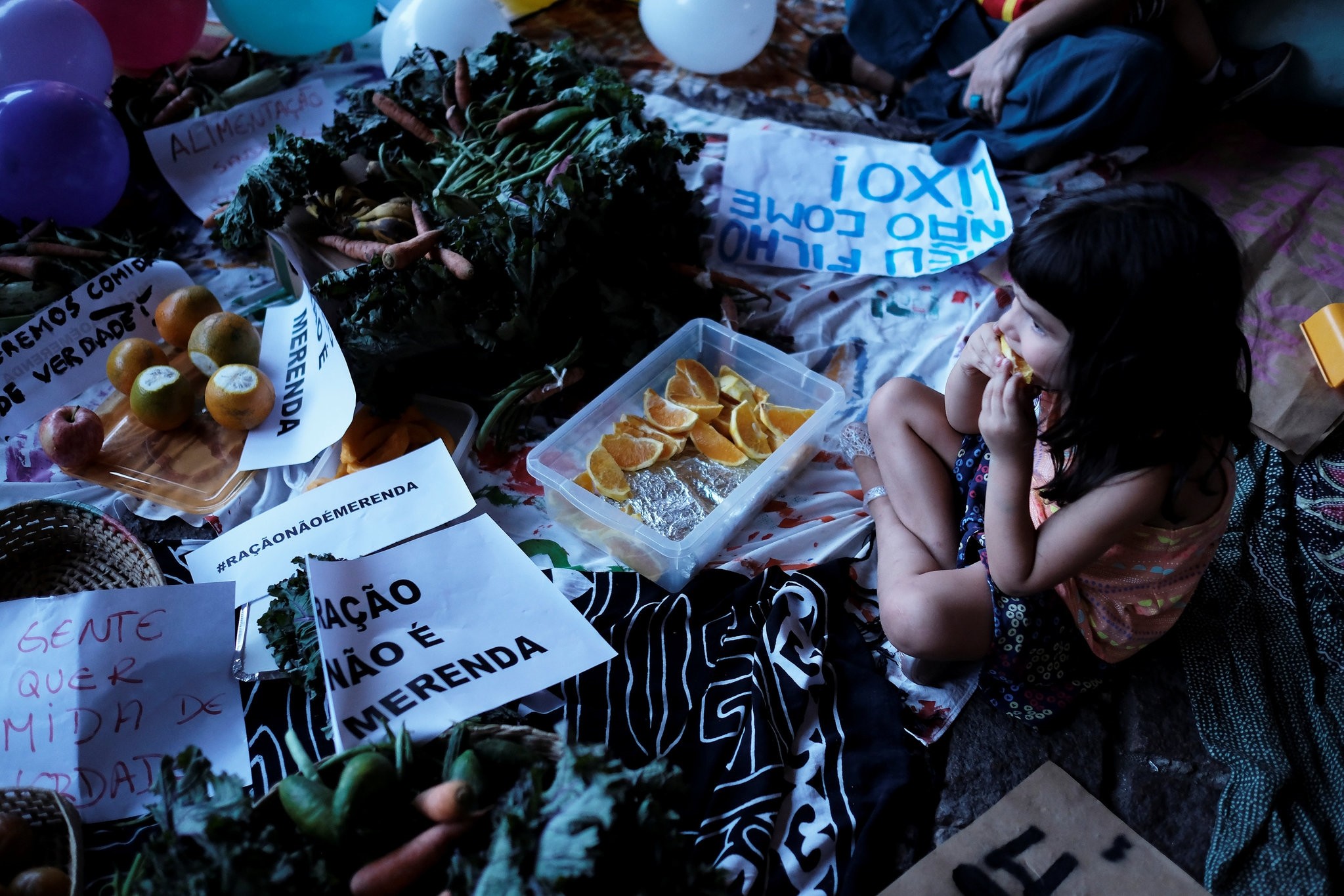 A child eats an orange next to a sign reading ,Food Pellets are not meals, during a protest against Sao Paulo Mayor Doria's plans to serve school meals made of reprocessed food pellets in Sao Paulo, Brazil October 19, 2017. (REUTERS Photo)
by French Press Agency - AFP
Oct 20, 2017 12:00 am

Nicknamed "dog food" and made from nearly expired left-overs, a new product designed to fight hunger among school kids in Brazil's largest city has sparked controversy.

Sao Paulo mayor Joao Doria this week presented the dry pellets at a press conference and promised they will reduce hunger among the city's poorest school children, while also slashing food waste.

In some of its forms, such as the pellets, the recycled food -- officially known as "farinata" -- can be eaten on its own, but it can also be added to other meals, such as spaghetti or cakes.

Despite the public outcry over its dystopian appearance and unappealing provenance, the mayor -- from the conservative PSDB party, and tipped as a potential presidential candidate in 2018 -- said he had already authorized the food to be distributed to some the city's schools this month, without specifying how many children would receive it.

"The ministry of education has been authorized to use it in school meals, in a complementary form," said Doria.

Human Rights secretary Eloísa Arruda said the move had been taken before a full study on the nutritional needs of underprivileged students had been carried out in Sao Paulo, the largest metropolis in South America.

Doria described the pellets as a "blessed food" when he presented them, and defended their immediate distribution to children from lower income families.

"Starting in October, we will have a gradual roll-out... to offer it to people who are hungry," he said.

But a lack of transparency over farinata's production and exact usage have only sharpened the controversy in a society already plagued by vast disparities between rich and poor.

"When we offer pellets to lower income people to eat, we are only exacerbating the inequality in society," said Vivian Zollar, a spokeswoman for the Region Council on Nutrition, saying the move demanded a broader debate within society.

The council issued a statement this week questioning the distribution of the pellets, saying it was a violation of the right to adequate food and "flew in the face of advances made in recent years in the field of food security."

Zollar also accused the mayor's office of not having sufficiently researched possible alternatives to tackle the problem of food scarcity.

"When the city presented the pellets, they said it was a good practice ... but no one ever thought it would replace food," she said.

The state of Sao Paulo has a million and a half people suffering from a lack of food, according to 2013 study by the Brazilian Institute for Geography and Statistics. That number rises to 7.2 million across the country.

"It offends me when people call this dog food, and say it is degrading to the poor" said Sao Paulo Cardinal Odilo Scherer, who supports the mayor's initiative. "It is degrading to deny them food."

He called for the debate over the new foodstuff to be depoliticized and carried out "with more objectivity."

Rosana Perrotti, a representative for Plataforma Sinergia, the group that developed farinata, said the new product met all the requirements set out under Brazilian law.

She described the food pellets as a unique development that could extend by at least two years the shelf life of foods that were about to expire.

But she denied an AFP request to visit the facility that produces the pellets, citing the need to protect the group's unique technology.

The financing of the product has also raised eyebrows.

Plataforma Sinergia, a not-for-profit group, said the development of farinata was sponsored by donors but declined to specify how much the project had cost.

The group has already handed out its product to three humanitarian organisations and aims to distribute them to Venezuelans fleeing their country's economic crisis across Brazil's northern border.