US hospitals short of nursing staff amid health care crisis 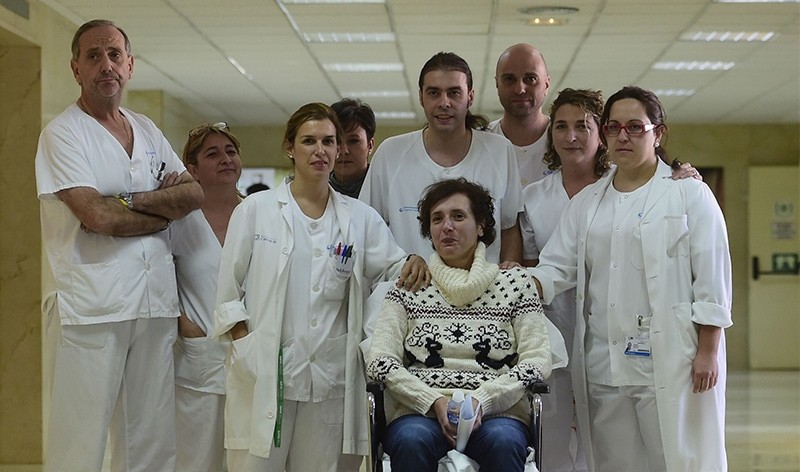 Former ebola patient Spanish nurse Teresa Romero (C DOWN) poses with medical staff before a press conference at Carlos III Hospital in Madrid on November 5, 2014 (AFP Photo)
by Oct 20, 2017 12:00 am

The nonprofit health care system is one of the state's largest employers and sits in the heart of economically depressed coal country. It faces a $40 million deficit this year as it struggles with fewer privately insured patients, cuts in government reimbursement and higher labor costs to attract a shrinking pool of nurses.

To keep its operations intact, Charleston Medical is spending this year $12 million on visiting or "travel" nurses, twice as much as three years ago. It had no need for travel nurses a decade ago.

"I've been a nurse 40 years, and the shortage is the worst I've ever seen it," said Ron Moore, who retired in October from his position as vice president and chief nursing officer for the center. Charleston Area Medical's incentives include tuition reimbursement for nursing students who commit to work at the hospital for two years.

"It's better to pay a traveler than to shut a bed," he said.

Hospitals nationwide face tough choices when it comes to filling nursing jobs. They are paying billions of dollars collectively to recruit and retain nurses rather than risk patient safety or closing down departments, according to Reuters interviews with more than 20 hospitals, including some of the largest U.S. chains.

In addition to higher salaries, retention and signing bonuses, they now offer perks such as student loan repayment, free housing and career mentoring, and rely more on foreign or temporary nurses to fill the gaps.

The cost nationwide for travel nurses alone nearly doubled over three years to $4.8 billion in 2017, according to Staffing Industry Analysts, a global adviser on workforce issues.

The burden falls disproportionately on hospitals serving rural communities, many of them already straining under heavy debt like the Charleston Area Medical Center.

These hospitals must offer more money and benefits to compete with facilities in larger metropolitan areas, many of them linked to well-funded universities, interviews with hospital officials and health experts show.

Along West Virginia's border with Pennsylvania, university-affiliated J.W. Ruby Memorial Hospital in Morgantown is spending $10.4 million in 2017 compared with $3.6 million a year earlier to hire and retain nurses.

But these costs are part of the facility's expansion this year, including adding more than 100 beds as it grows programs and takes over health care services from smaller rural providers that have scaled back or closed.

Next year, the hospital is considering paying college tuition for the family members of longtime nurses to keep them in West Virginia.

"We'll do whatever we need to do," said Doug Mitchell, vice president and chief nursing officer of WVU Medicine-WVU Hospitals.

Nursing shortages have occurred in the past, but the current crisis is far worse. The Bureau of Labor Statistics estimates there will be more than a million registered nurse openings by 2024, twice the rate seen in previous shortages.

A major driver is the aging of the baby boomer generation, with a greater number of patients seeking care, including many more complex cases, and a new wave of retirements among trained nurses.

Industry experts, from hospital associations to Wall Street analysts, say the crisis is harder to address than in the past. A faculty shortage and too few nursing school slots has contributed to the problem.

Hospitals seek to meet a goal calling for 80 percent of nursing staff to have a four-year degree by 2020, up from 50 percent in 2010. They also face more competition with clinics and insurance companies that may offer more flexible hours.

Health care experts warn that the shortfall presents risks to patients and providers. Research published in August in the International Journal of Nursing Studies found that having inadequate numbers of registered nurses on staff made it more likely that a patient would die after common surgeries.

UAB Hospital in Birmingham, Alabama, has invested millions to attract nurses, but still has 300 jobs to fill. At times, nursing vacancy rates in some of its departments has hit 20 percent or higher.

"We've rarely canceled a surgery or closed a bed because of lack of staffing," said Terri Poe, chief of nursing at the hospital, the state's largest, which serves many low income and uninsured residents.

Last year, the medical center covered nearly $200 million in unreimbursed medical costs for patients. It spent $4.5 million for visiting nurses during fiscal 2016, including $3 million for post-surgery services, compared with $858,000 in 2012.

Health care labor costs typically account for at least half of a facility's expenses. They jumped by 7.6 percent nationally last year, after climbing at a rate closer to 5 percent annually in recent years, said Beth Wexler, vice president nonprofit health care at Moody's. The spending has proven a boon for medical staffing companies like AMN health care and Aya health care.

Missouri's nursing shortage reached a record high in 2017, with almost 16 percent - or 5,700 - of positions vacant, up from 8 percent last year. Thirty-four percent of Missouri registered nurses are 55 or older.

"Our biggest challenge is getting the pipeline of experienced nurses," said Peter Callan, director of talent acquisition and development at the University of Missouri Health Care in Columbia, which is expanding. "There are fewer and fewer as people retire."

Last year, the academic medical center hired talent scouts to identify candidates, Callan said. It spends $750,000 a year on extras to attract and keep nurses, including annual $2,000 bonuses to registered nurses who remain in hard-to-fill units and up to five years of student loan repayment assistance. It offers employee referral bonuses and a chance to win a trip to Hawaii.

Smaller hospitals find it much harder to compete in this climate. More than 40 percent of rural hospitals had negative operating margins in 2015, according to The Chartis Center for Rural Health.

In rural Missouri, 25-bed Ste. Genevieve County Memorial Hospital had to offer signing bonuses, tuition reimbursement and pay differentials when staffing is "critically low" in units such as obstetrics.

They haven't closed beds, but have hired less experienced nurses, raised salaries and turned away at least one patient who would have been in its long-term care program.

"We've had to try whatever it takes to get nurses here," said Rita Brumfield, head of nursing at the hospital. "It's a struggle every day to get qualified staff."

To see the entire graphic on the U.S. nursing shortage, click.