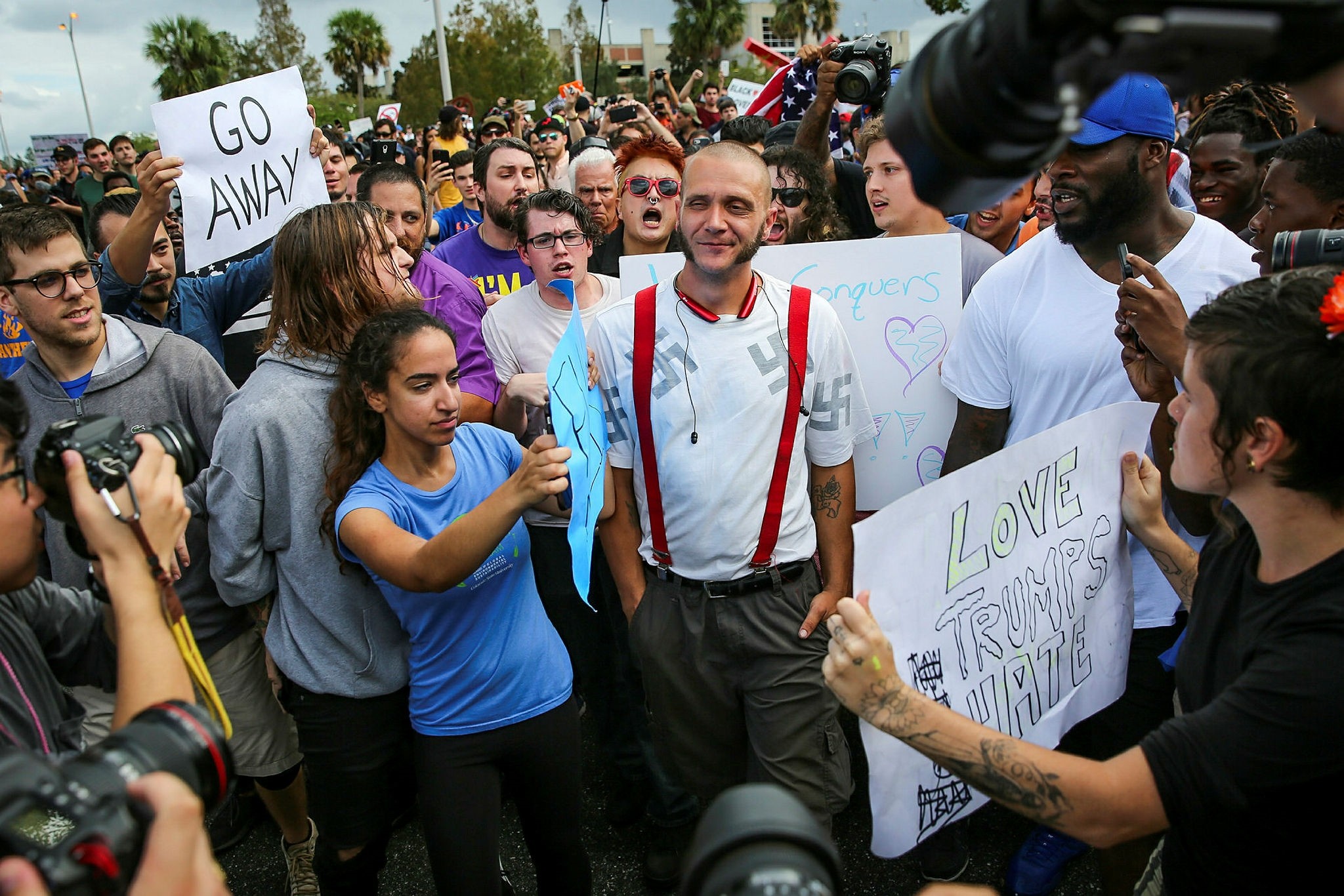 Protesters confront a man wearing a shirt with swastikas outside a University of Florida auditorium where white nationalist Richard Spencer was preparing to speak, Oct. 19.
by Compiled from Wire Services Oct 21, 2017 12:00 am

Fearing a repeat of deadly violence between white supremacist demonstrators and anti-fascist protesters, a Florida college town was on lockdown ahead of a speech by a white nationalist

Hundreds of people protested with signs and anti-Nazi chants outside a University of Florida auditorium where white nationalist Richard Spencer was preparing to speak. The protests came after the violence in Charlottesville, Virginia, on Aug. 12 when white nationalists protesting against the planned removal of a statue of Confederate military leader Robert E. Lee clashed with anti-racism demonstrators.

The quiet college town of Charlottesville became a bloodied symbol of the nation's roiling racial and political divisions. The Charlottesville violence created a fierce urgency to remove public statues, monuments and other glorified remembrances of leaders of the Confederacy in the U.S. Some believe that the statues mark history and honor heritage while others say they represent white supremacy and America's dark legacy of slavery.

The school estimated it spent $600,000 on security to ensure there was no repeat of violent clashes connected to a white nationalist gathering in Charlottesville, Virginia, that left one dead in August.

Fearing a repeat of clashes between far-right demonstrators and anti-fascist protesters, security was tight for Spencer's speech, with police flooding the streets and Florida governor Rick Scott declaring a state of emergency in the area.

Spencer, a leader of the so-called alt-right movement that includes white supremacists, neo-Nazis and supporters of the Ku Klux Klan, was one of the organizers of the August march in Charlottesville, Virginia, in which a far-right supporter drove his car into a crowd of demonstrators, killing a 32-year-old woman.

As he stepped onto the stage, Spencer was greeted with a chorus of angry and profanity-laced jeers and chants, drowning out his voice. "This is a great greeting," he said. "Thank you for the welcome. Are you ready to talk?"

"Are you gonna keep this up the whole night?" Spencer said, describing himself as a "dissident intellectual."

"You sent your message! Why don't we have a conversation?" he said "So you don't believe in free speech at all, do you?" "You are cowardly trying to shut down a movement that is growing and it's going to stand up for white people," Spencer yelled at the crowd.

George W. Bush issued a sharp denunciation of bigotry, white supremacy and falsehoods on Thursday, in what was seen as a clear rebuke of politics in the age of President Donald Trump. In a New York speech, the two-term former president warned that the coarsening of the national tone and divisive themes are threats to American democracy.

Though he did not mention Trump by name, Bush offered an implicit rebuke of the current administration and the controversial politics that emboldened millions of voters who swept Trump to victory last November.

"Bigotry or white supremacy in any form is blasphemy against the American creed," Bush stated, two months after Trump said "both sides" were to blame when a neo-Nazi rally in Virginia turned violent.