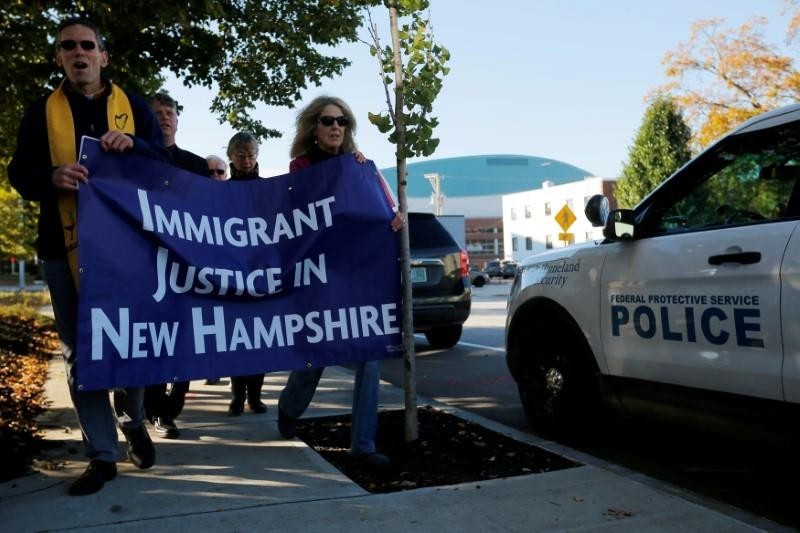 Demonstrators hold an ,Interfaith Prayer Vigil for Immigrant Justice, outside the federal building, where Christians who fled Indonesia decades ago & overstayed their visas in the US must check-in with ICE, in New Hampshire, Oct. 2017 (Reuters Photo)
by Oct 23, 2017 12:00 am

New Hampshire Governor Chris Sununu on Monday publicly called on U.S. President Donald Trump, a fellow Republican, to halt an effort to deport 69 Indonesian Christians who fled violence in that country two decades ago and are living illegally in the state.

The group had been living near the state's coast under the terms of a 2010 deal worked out with Immigration and Customs Enforcement (ICE) that allowed them to remain so long as they handed in their passports and turned up for regular check-ins with immigration officials.

That changed starting in August when members of the group who arrived for scheduled meetings with ICE officials at the agency's Manchester, New Hampshire, office were told to buy one-way plane tickets back to Indonesia, which they fled after 1998 riots that left about 1,000 people dead.

"I am respectfully requesting that your administration reconsider its decision to deport these individuals, and I urge a resolution that will allow them to remain in the United States," Sununu said in a letter to Trump dated Friday, which his office made public on Monday.

Several members of the group, who are all ethnic Chinese, told Reuters they fear that they would face discrimination or violence if they returned to the world's largest majority-Muslim country.

The White House did not respond to a request for comment.

Immigration advocates have filed lawsuits in Boston on behalf of 47 members of the group asking a federal court judge to intervene.

Chief U.S. District Judge Patti Saris has ordered a stay to the deportations, but has indicated that she has little jurisdiction over immigration, which is handled by the Executive Office for Immigration review.

She is currently weighing whether she can order a longer delay to give the affected people, many of whom have U.S.-born children, time to renew their efforts to gain legal status.

Most of the group entered the United States legally on tourist visas following the riots, which erupted at the start of the Asian financial crisis. They overstayed their visas and failed to apply for asylum on time, but have been allowed to live openly under the accord with ICE, negotiated with the help of U.S. Senator Jeanne Shaheen, a Democrat.