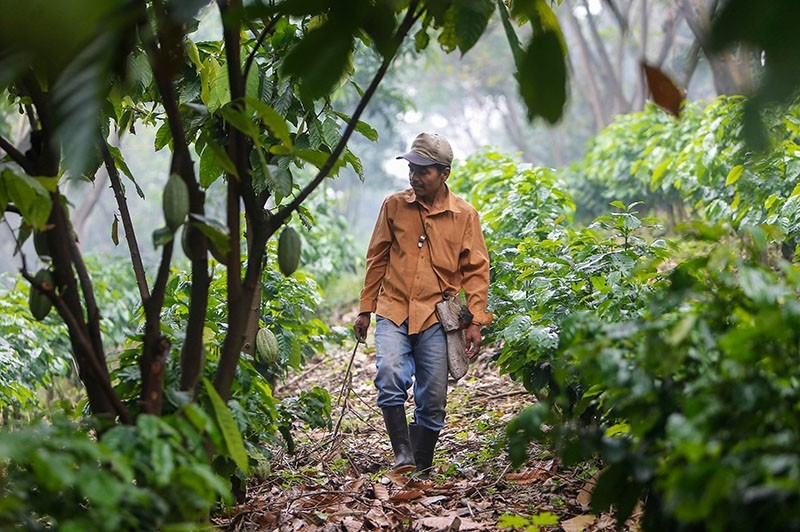 A Nicaraguan farmer surveys coffee crops whose growth could be affected by climate change (AFP Photo)
by Compiled from Wire Services Oct 24, 2017 12:00 am

Nicaragua signed the Paris climate agreement Monday, leaving the United States and Syria as the only two holdouts on the global climate pact to reduce greenhouse emissions.

The government of President Daniel Ortega said the global 2015 pact represented "the only international instrument that offers the conditions to face global warming and its effects," according to a statement read out by Vice President Rosario Murillo.

"We welcome Nicaragua's announcement, which further underscores the commitment of the international community to take full responsibility for our shared planet," said Elliott Harris, assistant secretary-general of the UN environment program.

The Central American country's move to join the pact comes just weeks after tropical storm Nate struck the region, highlighting the vulnerability of Nicaragua and its neighbors to the effects of climate change.

The Paris accord, agreed by nearly 200 countries two years ago, seeks to limit planetary warming by curbing global emissions of carbon dioxide and other gases that scientists believe drive global warming.

U.S. President Donald Trump in June announced the start of a three-year process to pull out of the agreement on the grounds that it would put the U.S. at an economic disadvantage.

Turkey signed onto the agreement in April 2016, promising to reduce its emissions by 21 percent over the next 13 years.