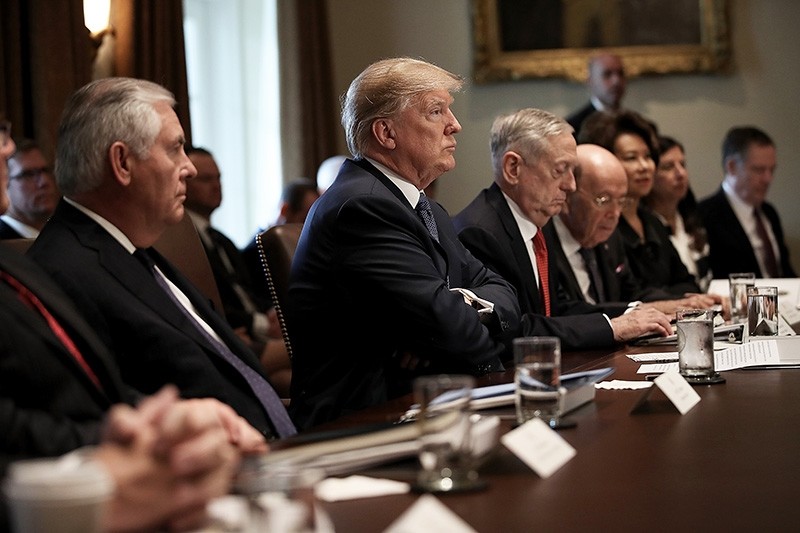 U.S. President Donald Trump said the New York attacker accused of killing eight when he drove a truck down a New York City bike path should get the death penalty.

"The NYC terrorist was happy as he asked to hang [a Daesh] flag in his hospital room. He killed eight people, badly injured 12. SHOULD GET DEATH PENALTY!" Trump wrote on Twitter.

The president had earlier said he would consider sending Sayfullo Saipov to Guantanamo Bay, the U.S. military detention center in Cuba that has been used to indefinitely hold suspected foreign terrorists. No detainee has been sent to the Guantanamo prison since 2008. Detainees at Guantanamo accused of supporting militants have faced military tribunals rather than trials in the U.S. legal system. Trump also has called for eliminating the 1990s visa lottery program that Saipov used to come to the U.S. in 2010.

The hearing came after terrorism charges were filed against Saipov, the man accused of driving a vehicle into pedestrians and cyclists on a bike path in Manhattan on Tuesday, killing eight people and injuring 12.

Saipov faces two charges, one of which carries the death penalty if the government chooses to seek it, Manhattan acting U.S. attorney Joon Kim said. The charges are one count of violence and the destruction of motor vehicles causing the deaths of eight people, and one count of providing material support and resources to a foreign terrorist organization, Daesh.

The maximum penalty for the first is death, and the maximum for the second life in prison, Kim said.

The charging document said Saipov waived his rights to remain silent, avoid self-incrimination and to have an attorney present when he agreed to speak to investigators from his bed at Bellevue Hospital Center in Manhattan where he was being treated after being shot by a police officer.

It said he was particularly motivated by a video where Abu Bakr al-Baghdadi — the leader of Daesh — exhorted Muslims in the United States and elsewhere to support the group's cause.

Investigators found thousands of Daesh-related propagandist images and videos on Saipov's cellphone, the complaint said. Among them were video clips showing Daesh prisoners being beheaded, run over by a tank and shot in the face.

The attack killed eight people, five of them childhood friends from Argentina celebrating 30 years since their high school graduation, a 31-year-old Belgian mother, and two U.S. men from New York and neighboring New Jersey. Of the 12 wounded, four remained in critical condition following the deadliest attack in America's financial capital since the al-Qaida hijackings on Sept. 11, 2001.

Saipov first started planning the attack a year ago, before settling two months ago on using a truck to kill as many people as possible during Halloween celebrations, according to a federal terrorism complaint.

During the last few weeks, Saipov scoured the internet for information on Halloween in New York City and rented a truck to practice turns. He chose a route along a lower Manhattan highway and initially hoped to continue to hit more pedestrians on the Brooklyn Bridge, the complaint said. Ultimately, Saipov sped down a bike path on a riverfront esplanade in a rented truck for nearly a mile Tuesday, running down cyclists and pedestrians, before crashing into a school bus, authorities said. Knives were found in a bag he was carrying.

In the past few years, Daesh has exhorted followers online to use vehicles, knives or other close-at-hand means of killing people in their home countries. England, France and Germany have all seen deadly vehicle attacks since mid-2016.