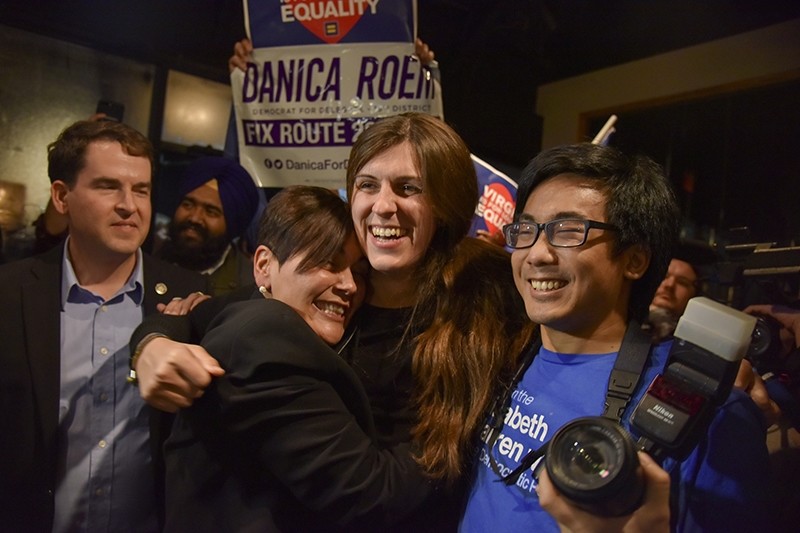 Danica Roem, center, who ran for house of delegates against GOP incumbent Robert Marshall, is greeted by supporters as she prepares to give her victory speech with Prince William County (AP Photo)
by Associated Press
Nov 08, 2017 12:00 am

A transgender candidate defeated an incumbent Virginia lawmaker who sponsored a bill that would have restricted which bathrooms she could use.

Democrat Danica Roem, a former journalist, is set to make history as the first openly transgender person elected and seated in a state legislature in the United States. She unseated Republican Del. Bob Marshall, one of the state's longest serving and most socially conservative lawmakers. The race was one of the year's most high profile, drawing international attention and big money to the northern Virginia House of Delegates district outside the nation's capital.

"It's historic. ... It sends a message to politicians everywhere that the politics of bigotry is over," Democratic House Caucus Chair Charniele Herring said.

Roem will be the first transgender member of the House of Delegates and will become the first out transgender person to win and serve in a state legislature, according to the Victory Fund, a political action committee that works to get openly LGBTQ people elected and has supported Roem.

Roem, who couldn't immediately be reached for an interview Tuesday night, openly discussed her gender identity during her campaign, but it was far from her focus. Instead, she focused on jobs, schools and, with particular fervor, northern Virginia's traffic congestion.

In an interview Wednesday morning with Washington's WTTG-TV, Roem thanked her grassroots supporters, saying they made it possible for her to run without relying on campaign contributions from corporations. She says she has refused to accept money from Dominion Energy, which she says has too much influence over lawmakers.

"We have got to change the culture in Richmond," she told the TV station.

Roem started pursuing therapy to begin her gender transition when she was 28, and said in an interview with The Associated Press during the campaign that politics should be inclusive of all.

"No matter what you look like, where you come from, how you worship or who you love, if you have good public policy ideas, if you're qualified for office, you have every right to bring your ideas to the table," she said.

She also argued that Marshall, who has served in the House since 1992, has spent too much time on social policy.

A lightning rod for controversy, Marshall often drew the ire of even his own party.

In addition to this year's bathroom bill, Marshall was also the author of a now-void constitutional amendment that defined marriage as between one man and one woman, and sponsored a bill banning gay people from openly serving in the Virginia National Guard.

On the campaign trail, Marshall and other Republicans repeatedly misidentified Roem's gender.

In a statement posted on his Facebook page, Marshall said: "For 26 years I've been proud to fight for you, and fight for our future. Though we all wish tonight would have turned out differently, I am deeply grateful for your support and effort over the years."

Roem, who sings in a metal band in her spare time, said she learned to listen to different perspectives and digest complicated policy as a reporter for the Gainesville Times and Prince William Times, skills she would bring to bear as a delegate.

Roem wasn't the only transgender candidate elected Tuesday. Tyler Titus, who is openly transgender, won a seat on a western Pennsylvania school board, The Erie Times-News reported.

"2017 will be remembered as the year of the trans candidate - and Danica's heroic run for office the centerpiece of that national movement," Aisha C. Moodie-Mills, president & CEO of Victory Fund, said in a statement.