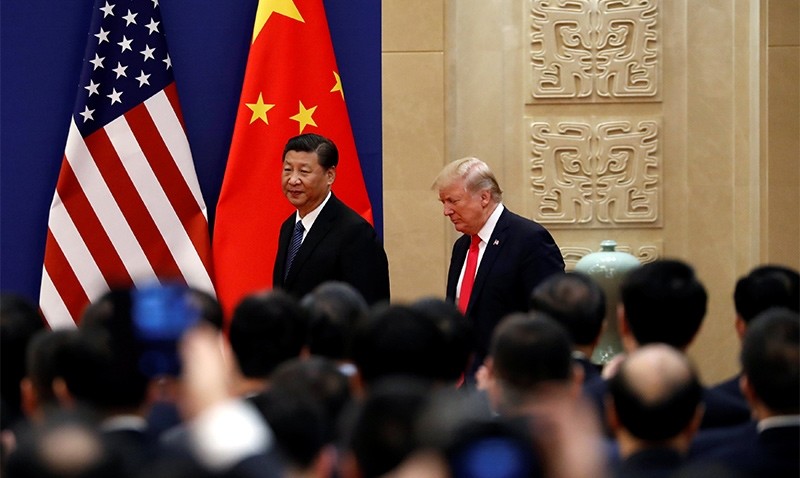 President Donald Trump emerged from a lengthy meeting with Chinese President Xi Jinping on Thursday to declare that he believed he and Xi together can solve "probably all" the world's problems.

"I look forward to many years of success and friendship working together to solve not only our problems, but world problems, and problems of great danger and security," Trump said between meetings at the Great Hall of the People. "I believe we can solve almost all of them, and probably all of them."

Trump and Xi were discussing a series of thorny issues during Trump's second day in China, including China's willingness to put the squeeze on North Korea over its nuclear weapons program, and the U.S.-China trade relationship.

Trump projected confidence on both fronts. He said both he and Xi believe "a solution" exists on North Korea. And he said the countries' trade relationship — which he complained had gotten "so far out of kilter" — would be made "fair and it'll be tremendous for both of us."

Xi, meanwhile, said U.S.-China relations were at a "new historic starting point." He said China was willing to work with the U.S. "with mutual respect, seeking mutual benefits, to focus on cooperation and control our differences."

Before the meetings, China rolled out the red carpet for Trump, treating him to an elaborate welcome ceremony on the plaza outside the Great Hall of the People before the leaders turned to their private talks.

Trump looked on approvingly as a Chinese honor guard played the national anthems of both countries, cannons boomed and soldiers marched. He clapped and smiled as children waving U.S. and Chinese flags and flowers screamed and jumped wildly.

Before arriving in China, Trump had delivered a stern message to Beijing, using an address to the National Assembly in South Korea to call on nations to confront the North.

He called on "every nation, including China and Russia," to fully implement U.N. Security Council resolutions against North Korea enforcing sanctions aimed at depriving its government of revenue for its nuclear and ballistic missile programs. The latest measure, adopted after a September atomic test explosion, the North's largest yet, banned imports of its textiles and prohibited new work permits for overseas North Korean laborers. It also restricted exports of some petroleum products.

Trump's words drew a caustic response from North Korean state media, which issued a statement Wednesday saying the U.S. should "oust the lunatic old man from power" and withdraw its "hostile policy" toward Pyongyang "in order to get rid of the abyss of doom."

White House officials said Trump would underscore his public messages about North Korea during his private talks with Xi. China is North Korea's largest trading partner and Trump is expected to demand that the nation curtail its dealings with Pyongyang and expel North Korean workers from its borders. Trump has praised China for taking some steps against Pyongyang, but he wants them to do more.

China is increasingly disenchanted with North Korea over its nuclear weapons development but remains wary of using its full economic leverage over its traditional ally. It fears triggering a collapse of the North's totalitarian regime that could cause an influx of refugees into northeastern China and culminate in a U.S.-allied unified Korea on its border.

China also poured on the pomp and pageantry for Trump's arrival Wednesday. The president and first lady Melania Trump were greeted at the airport by dozens of jumping children who waved U.S. and Chinese flags. The couple spent the first hours of their visit on a private tour of the Forbidden City, Beijing's ancient imperial palace. It's usually teeming with tourists but was closed to the public for the presidential visit.

The Trumps walked alongside Xi and his wife through the historic site and admired artifacts from centuries' past. Trump posed for photos and, with a wave of his hand, joked to Xi about the reporters watching. And he laughed and clapped along during an outdoor opera featuring colorful costumes, martial arts and atonal music.

The president also is expected to showcase a round of business deals, including those signed Wednesday by Chinese and U.S. companies that the two sides say are valued at $9 billion.

Among them: a pledge by China's biggest online retailer to buy $1.2 billion of American beef and pork. Such contract signings are a fixture of visits by foreign leaders to China and are aimed at blunting criticism of Beijing's trade practices.

It's "a way of distracting from the fact that there's been no progress in China on structural reform, market access or the big issues that the president has tried to make progress on with regard to China," said Elizabeth Economy, the director for Asia Studies at the Council on Foreign Relations.

Trump has made narrowing the multibillion-dollar U.S. trade deficit with China a priority for his administration. During his campaign, he accused China of "raping our country" on trade and pledged to minimize the countries' trade imbalance.