Protesters call for deportation of former Nazi guard from US 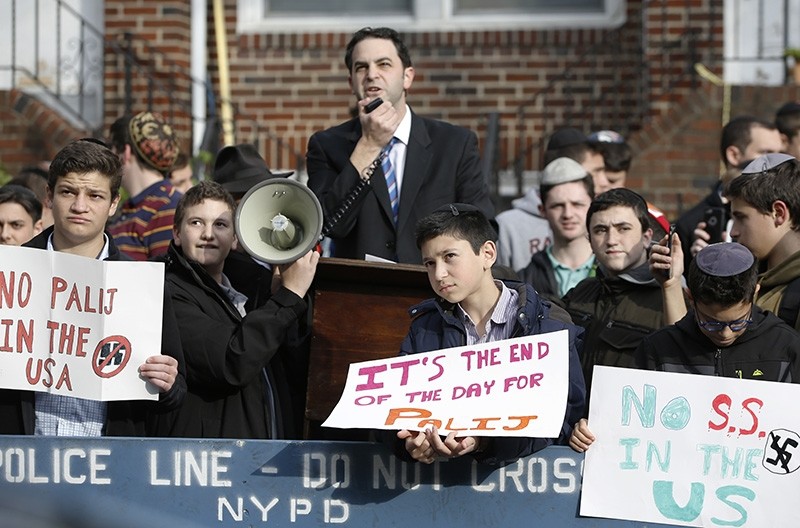 A crowd of teens from an Orthodox Jewish school demonstrated Thursday outside the New York City home of a former Nazi concentration camp guard whose U.S. citizenship was revoked but who hasn't been deported.

About 100 students from Rambam Mesivta stood across the street from the Queens home of 94-year-old Jakiw Palij on the 79th anniversary of Kristallnacht. He did not come out as they shouted "Your neighbor is a Nazi."

Police stood in front of the three-story row house, marked by an overgrown garden and a rotting front door.

Palij was a guard at the Trawniki concentration camp in Nazi-occupied Poland in 1943. He has said he was forced to be a guard.

A federal judge removed Palij's citizenship in 2003, saying he falsified his immigration application. New York's legislators have urged the federal government to deport him.

Holding a sign that read "His hands are drenched in blood", 16-year-old Joshua Koegel said that he was protesting Palij's involvement in the extermination of Jews. "The fact he has remained here and taken advantage of the U.S., he's enjoyed the rights of living here," the teen said.

One neighbor who lives directly across the street said he never had seen Palij in front of his house.

Angel Tenesaca, who has lived a few doors down from Palij for 25 years, said he rarely sees his neighbor.

"Sometimes when I walked past I would try to make eye contact but he was always looking down," Tenesaca said.

The protest was organized by Rabbi Zev Friedman, dean of the school, who led the chants of his students.

"It's extremely important that no Nazi walk the streets of the U.S.," Friedman said.

In October, New York's congressional delegation sent a letter calling on Secretary of State Rex Tillerson to deport Palij. It was signed by all 29 members, both Republicans and Democrats.

On Nov. 9, 1938, Nazis in Germany attacked Jewish homes, businesses and synagogues, which came to be known as Kristallnacht.