60 pct in favor of stricter gun laws in US, survey says 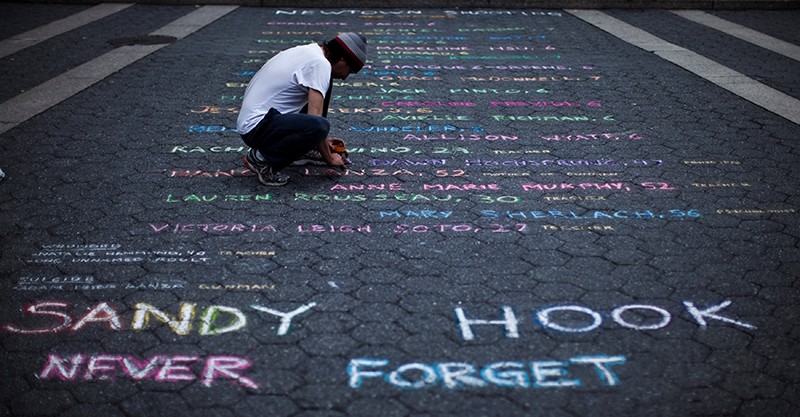 Street artist Mark Panzarino, 41, prepares a memorial as he writes the names of the Sandy Hook Elementary School victims during the six-month anniversary of the massacre (Reuters File Photo)
by French Press Agency - AFP
Nov 15, 2017 12:00 am

Support for background checks for gun purchases and a ban on sales of assault weapons have reached new highs among U.S. voters following a series of mass shootings, according to a poll published Wednesday.

Ninety-five percent of the 1,577 people surveyed in the Quinnipiac University poll said they support requiring background checks for all gun buyers.

Only four percent said they opposed it.

This was the highest level of support for background checks since Quinnipiac first asked the question in February 2013 following the December 2012 massacre of 20 schoolchildren in Sandy Hook, Connecticut.

Sixty-five percent of those surveyed said they supported a nationwide ban on sales of assault weapons while 31 percent said they were opposed.

That was also a new high and up from March 2013, when 54 percent said they supported an assault weapons ban while 41 percent were opposed.

In other findings, 91 percent of those polled said they support a ban on sales of guns to people convicted of violent crimes.

Thirty-four percent of those polled said stricter gun laws would help prevent mass shootings, but 62 percent said shooters would find a way around tighter laws and commit the crimes anyway.

"With each American gun massacre, there is stronger voter support for tighter gun control measures," said Tim Malloy, assistant director of the Quinnipiac University Poll. "But the cynical view prevails. Stricter laws will do no good whatsoever in a country with more guns than people."

Stephen Paddock, a retired accountant, shot dead 58 people at a country music concert in Las Vegas in October and a U.S. Air Force veteran shot dead 26 people at a church in Texas on Nov. 5.

Democratic senators introduced an updated assault weapons ban this month but the legislation has not gained support from Republicans who control the chamber.

Quinnipiac said the poll of registered voters has a margin of error of plus or minus three percentage points.