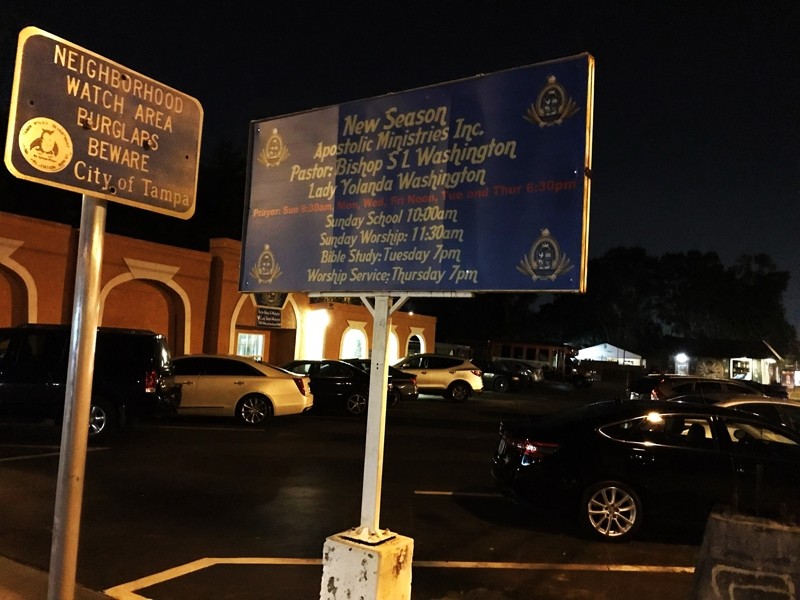 A sign warning burglars to beware (L) is seen beside a church notice late November 15, 2017 in Tampa, Florida, with fears mounting over a possible serial killer (AFP Photo)
by French Press Agency - AFP
Nov 16, 2017 12:00 am

A possible serial killer is on the loose in Tampa, Florida, picking out victims seemingly at random on the street, and shaken residents are looking over their shoulders fearing he could be someone they know.

Early Tuesday, 60-year-old Ronald Felton became the fourth person to die since October 9 in a string of mysterious attacks near downtown Tampa.

All four murders took place within a seven block area, in the city's working class Seminole Heights neighborhood. All the victims were along on the street at the time, and were shot dead for no apparent reason. None of them were robbed.

Felton, an unemployed construction worker, was crossing a street before dawn when someone came up behind him and shot him in the back of the head, police said.

His body was found sprawled near the New Seasons Apostolic church, where Fenton often volunteered at a food bank for the down-and-out.

As in the previous cases, the killer melted into the night, eluding police despite stepped up patrols.

His seeming knowledge of the neighborhood's ins and out has led to suspicions that he lives there.

"I hope the police catch him, but he's using his brain and he's got to be from the neighborhood -- look how quickly he's getting away," he said.

Rodriguez was with his son Antonio, 18, and Antonio's 17 year-old girlfriend Makayla Meadows on Wednesday night, near the spot where Felton was killed.

He said they now take a harder look at people they don't know, as their community settles into a state of hypervigilance.

"As a parent, as a member of the community I'm concerned," Rodriguez said.

The first victim in the string of killings was 22-year-old Benjamin Mitchell. Two days later, on October 11, Monica Hoffa, 32, was gunned down, and then on October 19, Anthony Naiboa, 20.

Antonio Rodriguez said he previously worked with one of the victims, Mitchell, at a Walmart store.

"We really would chill together outside of work," he recalled. "That's why I really don't like talking about it too much. It gets me in my soft spot. He was a good kid."

Tampa's police are treating the four killings as related, until they can rule otherwise.

Unlike the previous killings, in the case of Felton police have a description of a suspect -- a black male, around six-foot (1.80 meters) tall, dressed all in black and armed with a large pistol -- seen fleeing the scene according to a witness account.

Police on Wednesday also released a clip from a surveillance video taken shortly before the latest murder, showing a man in a hooded light colored jacket.

After the first murder, surveillance cameras picked up an image of a man with a similar hoodie, a similar gait and walk, flicking a cellphone open and closed in a similar manner.

"We need someone who is thoughtful, cares, and has the heart and the fortitude and bravery to step forward and tell us who this person is and give us the identity," Tampa police chief Brian Dugan told a press conference.

Ryan Reynolds, 37, has been sleeping in a park because he's between jobs. But if he's worried, he doesn't admit to it.

"It's the people who aren't paying attention that he's preying on, randomly," he said.

"He's got to know the streets and alleys around here. At first I thought it was gang related, but now that it's more than one (victim), it's something else. The guy's got to live in this neighborhood."

Up the street, Ramon Maldonado watched the police patrol the area while on a cigarette break from his job as a sushi chef.

"But this isn't just up to the police -- we've got to come together as a community to help catch this guy. Someone knows something. I can't walk outside with my family no more."