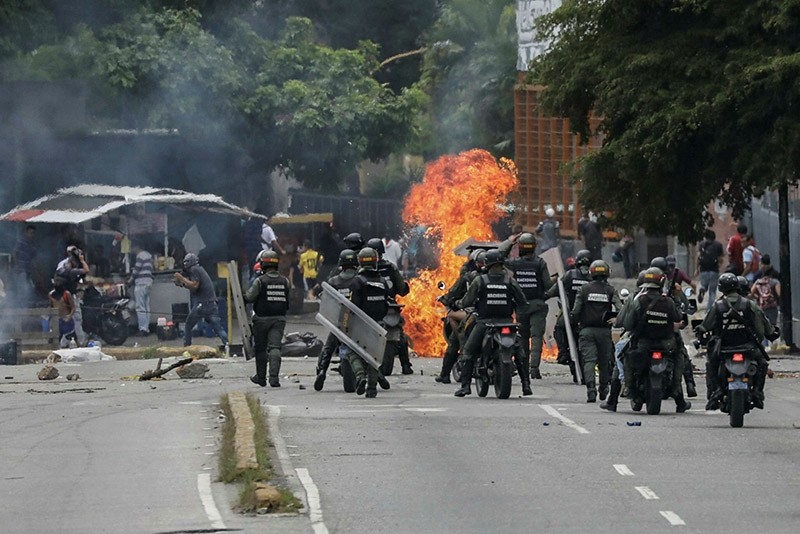 Some of the more than 5,000 people detained were beaten, sexually assaulted or given electrical shocks in what the New York-based rights group describes in a report as a level of repression "unseen in Venezuela in recent memory."

"The widespread vicious abuses against government opponents in Venezuela, including egregious cases of torture, and the absolute impunity for the attackers suggests government responsibility at the highest levels," said Jose Miguel Vivanco, Americas director for Human Rights Watch. "These are not isolated abuses or occasional excesses by rogue officers."

Demonstrators say heavy-handed National Guard soldiers clamped down on their right to protest, while Maduro says his administration faced a U.S.-backed "armed insurgency."

More than 120 people died in the unrest, with victims including demonstrators, government supporters, security officials, and bystanders.

Venezuela's Information Ministry did not respond to a request for comment.

In one case cited, intelligence agents allegedly hanged a 34-year-old government critic from the ceiling and gave him electric shocks as they interrogated him. The man, whose name was not revealed, was ultimately released and left Venezuela.

In another case, a 32-year-old detained during a protest in Carabobo state was allegedly beaten for hours by National Guard soldiers who also threatened to rape his daughter. He said officials also fired tear gas into his cell.

Others interviewed recounted being handcuffed to a metal bench, hit with sticks, and witnessing a man being raped with a broomstick. At least 15 detainees in Carabobo said officials forced them to eat human excrement mixed in with uncooked pasta.

The government failed to acknowledge such violations, the report said, adding that instead officials "often downplayed the abuses or issued implausible, blanket denials."

Maduro's government says Human Rights Watch is in league with a Washington-funded conspiracy to sabotage socialism in Latin America. Rights activists are in league with the opposition and compliant foreign media, officials say, and downplay opposition violence, including setting a man on fire during a demonstration and targeting police with explosives.

The two rights groups said there were cases of protesters hurling rocks and Molotov cocktails at security forces, but that abuses by authorities went far beyond attempts to quell unrest.