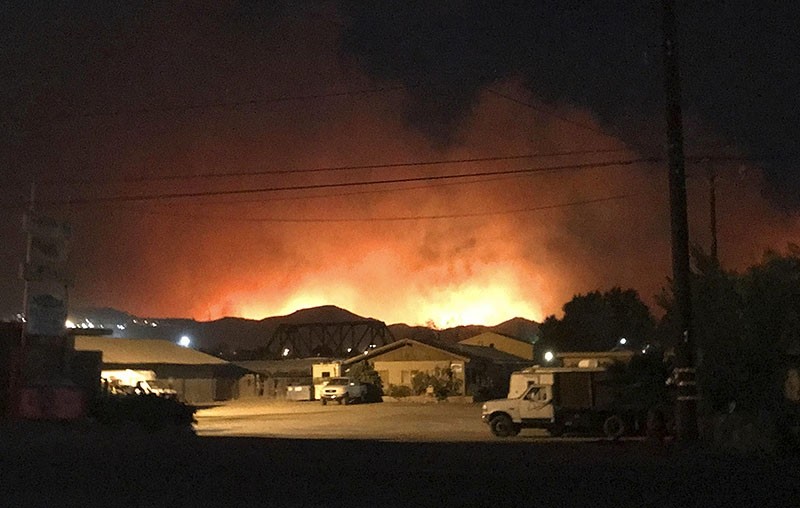 Ferocious winds in Southern California whipped up an explosive wildfire that forced thousands of homes to evacuate and could soon threaten a city of more than 100,000 in the foothills north of Los Angeles, authorities said.

The blaze broke out Monday and grew wildly to more than 15 square miles in the hours that followed, consuming vegetation that hasn't burned in decades, Ventura County Fire Sgt. Eric Buschow said.

The winds were pushing it toward Santa Paula, a city of some 30,000 people about 96 kilometers (60 miles) northwest of Los Angeles. Most of the evacuated homes were in that city.

Authorities said that the city of Ventura, which is 12 miles southwest and has 106,000 residents, was likely to feel the effects soon.

"The fire growth is just absolutely exponential," Ventura County Fire Chief Mark Lorenzen said. "All that firefighters can do when we have winds like this is get out ahead, evacuate people, and protect structures."

Some 1,000 households in the county were told to leave as the 10,000-acre wildfire, known as the Thomas Fire, burned dry brush after erupting earlier in the evening, Ventura County officials said on Twitter.

One motorist was killed fleeing the fire, a local ABC affiliate reported. More than 150,000 homes were without power and at least two structures were destroyed, media reported.

"We got my kids out first," Melissa Grisales told ABC 7 in Los Angeles. "Pretty scary, really. I didn't think it was going to come to that, but I am starting to get pretty concerned."

Thomas Aquinas College, a school with about 350 students, has also been evacuated, with students going to their own homes or to those of faculty and staff, the college said in a statement.

One person was killed in an auto accident associated with the fire, officials said. They gave no further details.

The fire was stoked by wind gusts of up to 70 mph (115 kph) that were expected to remain in the area along with low humidity through the week, the National Weather Service forecast.

Evacuation centers were opened at a high school and the county fairgrounds, media reported.

Firefighters and aircraft from neighboring Los Angeles and Santa Barbara counties were pouring in to help, though the darkness and winds forced the grounding of planes late Monday night.