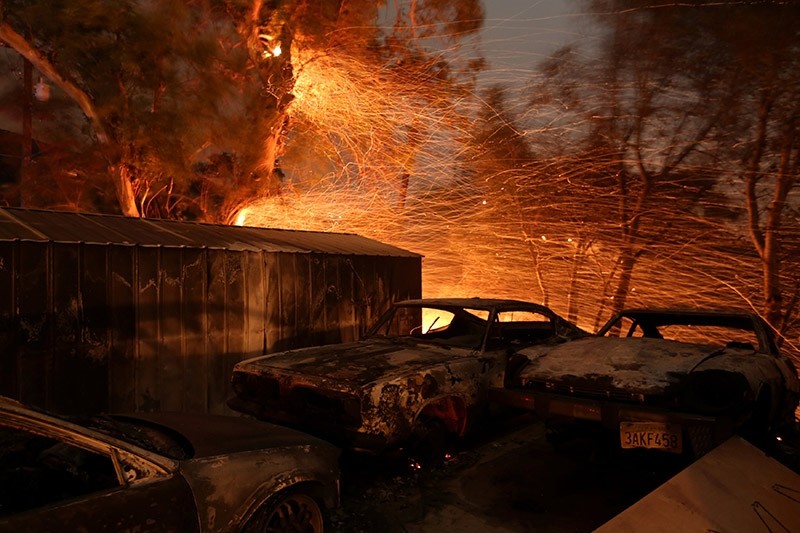 Embers blow from a tree shortly before it fell down near burned cars as strong winds push the Thomas Fire across thousands of acres near Santa Paula, California, U.S., December 5, 2017. (Reuters Photo)
by Dec 06, 2017 12:00 am

An unrelenting wildfire fanned by hot, dry Santa Ana winds threatened more than 12,000 homes in and around Ventura, California, on Wednesday, forcing thousands of people to race for safety.

The fire, dubbed the Thomas Fire, raged in the foothills above and in the city of Ventura some 50 miles northwest of Los Angeles, fire officials said late on Tuesday, a day after it began. It had charred more than 50,000 acres, they said.

"We are still in the middle of an aggressive and active firefight on the ground," said Robert Welsbie, spokesman for the Ventura Fire Department. "If the winds pick up, we will face quite a challenge."

The fire, which was zero percent contained, was being whipped by unpredictable Santa Ana winds, which blow in from the California desert. Wind gusts were forecast to top out at 70 miles per hour (115 km per hour) on Wednesday and remain strong through the week.

There were no immediate reports of fatalities or civilian casualties, Welsbie said.

"The public did an outstanding job heeding our evacuation orders, getting out of these danger zones in a very prompt timely manner," Welsbie said.

Some 1,000 firefighters were battling to save homes from the conflagration. One firefighter suffered a minor injury, was treated and released, Welsbie said.

More than 250,000 homes were without power, utilities said. All schools in the Ventura Unified School District canceled classes for Wednesday.

The Thomas Fire was the largest of several large blazes that broke out across Southern California following the onset of the Santa Ana winds.

In the San Fernando Valley north of Los Angeles, the so-called Creek Fire had blackened more than 11,000 acres and forced the evacuation of 2,500 homes and a convalescent center north of Interstate 210. The highway remained open even as other roads were closed, officials said.

Three firefighters were injured and taken to a hospital, where they were in stable condition, the Los Angeles Fire Department said on its website.

Some 30 structures were destroyed by the Creek Fire as of Tuesday evening, the Los Angeles Fire Department said.