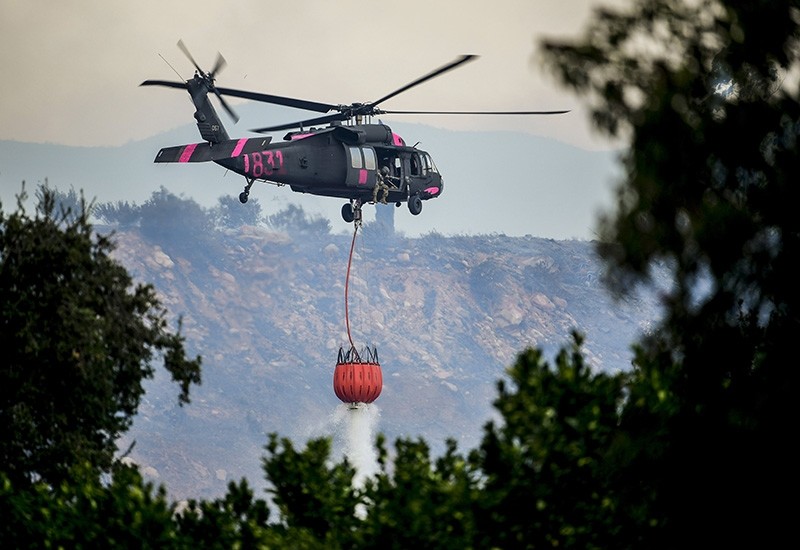 A military helicopter participaties in firefighting efforts in Ventura County against the Thomas Fire in Ojai, California, USA, 07 December 2017. (EPA Photo)
by Dec 09, 2017 12:00 am

California Governor Jerry Brown will survey the destruction of the state's devastating wildfires on Saturday, as firefighters rushed to contain the blazes before dry desert winds were expected to intensify.

The six major wildfires that erupted throughout Southern California in the past week have killed at least one person, destroyed hundreds of buildings, forced more than 200,000 people to flee and choked the air across much of the region.

Forecasters predict wind gusts to become more intense by Saturday night, challenging the 8,700 firefighters who have been battling the fast-moving blazes for five days.

The winds "potentially put the fires that are currently burning at risk of spreading," said Lynne Tolmachoff, spokeswoman for California Department of Forestry and Fire Protection (CAL FIRE).

Brown plans to meet at noon PST (2000 GMT) with residents and officials in Ventura County northwest of Los Angeles, where officials said the largest of the blazes, the Thomas Fire, has charred 148,000 acres (59,893 hectares) and destroyed 537 structures.

"We're going to recover. Have no doubt about that," the governor said on Twitter on Friday.

The fires have put property worth billions of dollars at risk in California, where wildfires in the northern part of the state in October resulted in insured losses of more than $9 billion. Those fires, concentrated in the state's wine country, killed 43 people.

The current fires, which have threatened Californians from near Santa Barbara County down the Pacific coast to Mexico, have claimed at least one human casualty.

Ventura County officials, who have contained 15 percent of the Thomas Fire, said they expect to increase their containment of the blaze later on Saturday.

At their peak, the fires drove about 212,000 Californians from their homes. Evacuation orders now have been lifted in some areas, welcome news for many in shelters waiting to see if their homes survived.

North of San Diego, the Lilac Fire destroyed 105 structures after swelling from 10 acres to 4,100 acres (1,659 hectares) in a few hours on Thursday.

Fallbrook, known for its avocado orchards, burned, and homes were destroyed in its Rancho Monserate Country Club retirement community. Blazes approached the Camp Pendleton marine base.

An estimated 25 to 30 horses died, in addition to 29 horses killed in Los Angeles earlier in the week. A trainer suffered second- and third-degree burns over half her body trying to rescue horses, the newspaper said. She was airlifted to a San Diego hospital and placed in a medically induced coma.