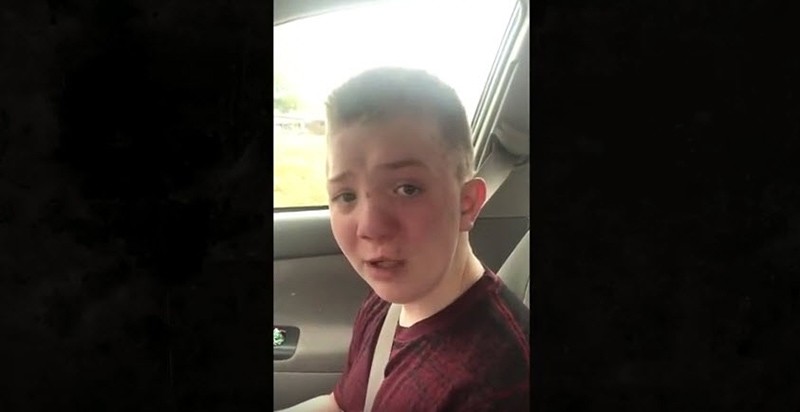 A video of a boy tearfully talking about being bullied at school has gone viral and prompted an outpouring of support from Hollywood celebrities, music stars, athletes and others.

Keaton Jones's mother posted the video on Facebook Friday, writing that her son asked to make it after he had her pick him up from school because he was afraid to go to lunch.

It has since been viewed 22 million times and shared more than 440,000 times.

"Just out of curiosity, why do they bully? What's the point of it? Why do you find joy in taking innocent people and finding a way to be mean to 'em? It's not OK," Jones says in the video.

"They make fun of my nose, they call me ugly, they say I have no friends... (they) pour milk on me and put ham down my clothes, threw bread at me," he says.

That day may have come sooner than he expected.

Chris Evans, the actor who plays Captain America, invited Jones to the premiere of the next Avengers film.

"Stay strong, Keaton. Don't let them make you turn cold. I promise it gets better," Evans wrote on Twitter.

"While those punks at your school are deciding what kind of people they want to be in this world, how would you and your mom like to come to the Avengers premiere in LA next year?"

"Why do people do this? I think your sooo cool Keaton! I wanna be your friend ( but srsly) ur freakin awesome," tweeted Millie Bobby Brown, who plays Eleven on the hit series "Stranger Things."

Rapper Snoop Dogg encouraged Jones to get in touch with him by direct message.

"Say lil Man U gotta friend in me for life hit me on dm so we can chop it up love is the only way to beat hate," he wrote in an Instagram post.

"Hey Keaton…I just wanted to say I think you are amazing…I would love for you to be my date to the Pitch Perfect 3 premiere on Tuesday," singer Hailee Steinfeld said in a video on her Twitter

"Keaton-Don't waste time wondering why a bully would be so mean-They're sad people who think hurting others will make them feel better because they really don't like themselves," tweeted Mark Hamill, who plays Luke Skywalker in the blockbuster space saga "Star Wars."

"This video is heartbreaking!! I want to bring Keaton to Vegas and hang out at UFC Headquarters," White tweeted.

And Delanie Walker, who plays tight end for the Tennessee Titans, posted a video on Twitter in which he invited Jones and his family to the football team's game on December 31.

The response has been overwhelming for Jones's mother Kimberly.

"Friends, overwhelmed is the understatement of the world right now. I love each of you for what you are doing, but there is literally no way I can respond or even read all of the messages," she wrote in a follow-up post.

The video and other posts are no longer visible on her Facebook page.