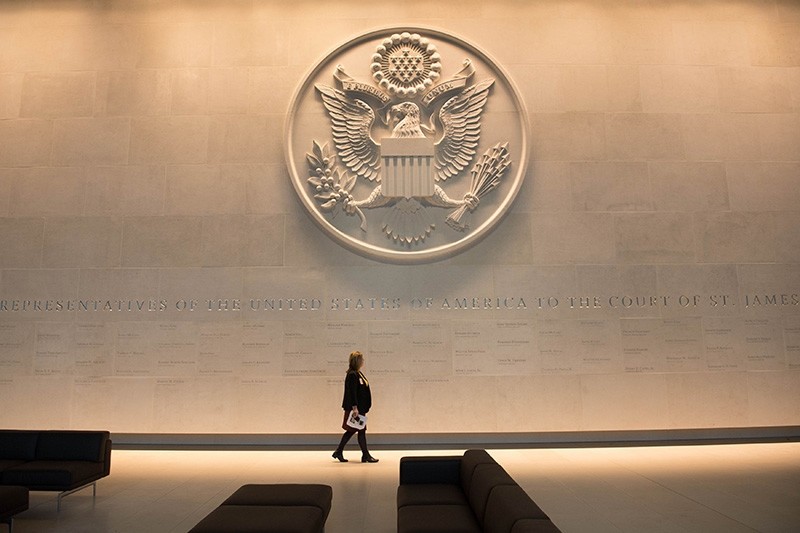 A general view shows the consular and visa section during a press preview of the United States Embassy building in central London on December 13, 2017. (AFP Photo)
by Dec 15, 2017 12:00 am

The Trump administration put new requirements in place on Friday for the 38 countries participating in the U.S. Visa Waiver Program, including that they use U.S. counterterrorism data to screen travelers, officials said.

The program allows citizens of mainly European countries to travel to the United States for up to 90 days without a visa. Citizens from the 38 countries are required to obtain a so-called travel authorization to enter the United States.

President Donald Trump has sought to tighten the rules for those seeking to visit or live in the United States in several ways, saying restrictions are necessary for security reasons.

Countries whose citizens stay longer than authorized during visits to the United States at a relatively higher rate will be required to conduct public awareness campaigns on the consequences of overstays, the officials said. One existing penalty is that people who overstay a visit may not travel visa-free to the United States in the future.

The threshold for the overstay rate triggering the public information campaign requirement is two percent, the officials said. In the 2016 fiscal year, of the VWP countries, Greece, Hungary, Portugal, and San Marino, a wealthy enclave landlocked inside central Italy, had total overstay rates higher than two percent, according to a report by the Department of Homeland Security.

The overall overstay rate for VWP countries is 0.68 percent, lower than non-VWP countries excluding Canada and Mexico, which is at 2.07 percent, according to the DHS report.

Members of Congress have expressed concern about the security risks of overstays. A May 2017 report by the DHS inspector general found the department lacked a comprehensive system to gather information on departing visitors, forcing it to rely on third-party data to confirm departures, which is sometimes faulty.

The United States will also start assessing VWP countries on their safeguards against "insider threats" at their airports, especially those with direct flights to the United States, officials said.

The goal is to ensure countries "make sure that airport employees, aviation workers et cetera, aren't corrupted or are co-opted to pose a threat to aircraft, especially those that are U.S.-bound," an official said.