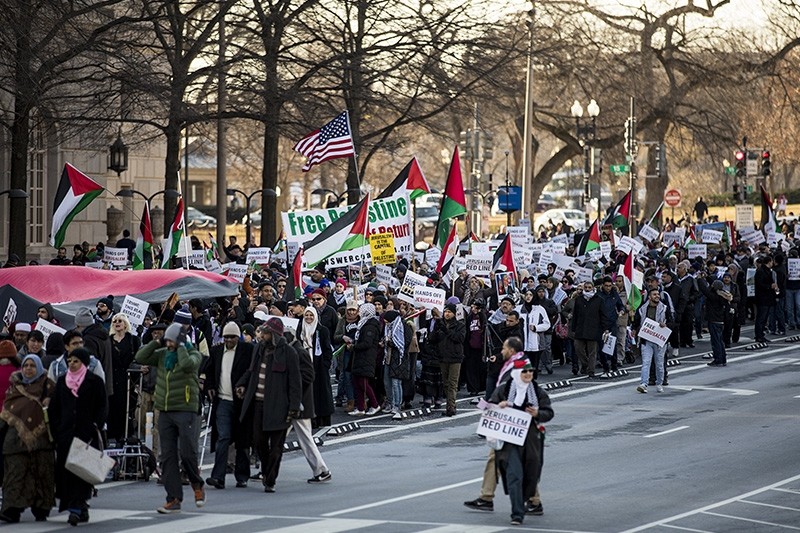 Demonstrators walk in protest against the U.S. decision to recognize Jerusalem as Israel's capital in Washington D.C. (AA Photo)
by Anadolu Agency Dec 17, 2017 12:00 am

Thousands gathered near by the White House on Saturday to protest President Donald Trump's decision to recognize Jerusalem as the capital of Israel.

"Jerusalem is the eternal capital of Palestine whether Trump or his buddy, the war criminal, Benjamin Netanyahu like it or not," AMP Director Osama Abu Irshaid said during his speech to protesters.

"If Mr. President wants to give property to the state of Israel, he should give one of his properties if he really owns them," Abu Irshaid continued. "But we don't really know how much he owns because he never declared his taxes."

He said that Jerusalem does not belong to Trump or Israel and Trump has no right to give away Palestinian's land.

Last Wednesday, Trump announced his decision to recognize Jerusalem as Israel's capital, and move the U.S. Embassy from Tel Aviv to the holy city. The dramatic shift in U.S. policy drew a storm of condemnation and protest across the Arab and Muslim world.

At a Tuesday summit in Istanbul, the Organization of Islamic Cooperation responded to the controversial U.S. move by formally recognizing East Jerusalem as the capital of Palestine.

"Why do not you give your Trump Hotel, which is a few blocks away from where we are right now. But he cannot. Because he does not own it and he leased it for 60 years. We, Americans own that building," he added. "So what makes him think that he can give Jerusalem away?"

Abu Irshaid also slammed Trump's son in law, Jared Kushner, saying that if Kushner wants to give something to Israel, he should give away his investments in Manhattan, New York.

Describing the Jerusalem as the unalterable part of Palestine, he added that "empty promise" of the U.S. president will going down as a failure.

"Mr. President take your empty promise and trow it to the trash. Because that were it belongs," Abu Irshaid shouted at the end of his speech.

TASC Director Halil Mutlu also spoke at the protest and emphasized the importance of the city of Jerusalem for three major religions such as Islam, Christianism and Judaism.

"As we said before Al-Quds [Jerusalem] is our redline. 80 million Turks and millions of Christians, Jews and Muslims around the world are against Trump's decision," Mutlu said.

Denouncing the recent U.S. decision on Jerusalem, he urged American President to undo his decision.

A protester, Abdollah Haniyyah said that he and his family came from Chicago to stand against Trump's decision and show their solidarity.

"We love Turkish people and President Erdogan," Haniyyah told Anadolu Agency. "He is the true leader of Muslims and we want all Muslim leaders to show solidarity for Palestine and Jerusalem as he does."

Rabbi Yisroel Dovid Weiss and many of Jewish believers from New York and Washington chapters of Jews United Against Zionism, were also among those who participated in the demonstration, even though they were not supposed to travel on Saturdays due to religious believes.

While Muslims performed the daily prayer in the area, Rabbi Weiss and his companions held banners that read: "Torah true Jews in Jerusalem and Worldwide condemn the aggression in Al-Aqsa and the occupation of Palestine" and "Judaism rejects Zionism and the state of Israel".

Protesters chanted against Israel and Trump's decision on Jerusalem, carried banners reading "Stop the occupation in Palestine now", "Jerusalem belongs to Palestinians" and "We reject Trump's decision". The event ended in front of U.S. Congress without conflict.