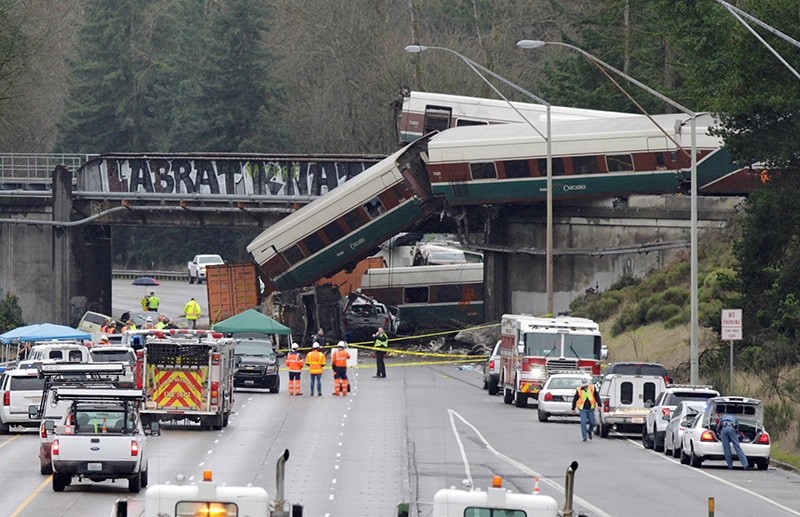 Rescue personnel and equipment are seen at the scene where an Amtrak passenger train derailed on a bridge over interstate highway I-5 in DuPont, Washington, U.S. Dec. 18, 2017. (Reuters Photo)
by Compiled from Wire Services Dec 18, 2017 12:00 am

An Amtrak train making the first-ever run along a faster new route hurtled off an overpass south of Seattle on Monday and spilled some of its cars onto the highway below, killing at least three people, injuring dozens and crushing two vehicles, authorities said.

Attention quickly turned to the train's speed. Federal investigators say the train was traveling at 80 mph (129 kph) in a 30 mph (48 kph) zone. Bella Dinh-Zarr, an NTSB board member, said at a Monday night news conference that information from the event data recorder in the rear locomotive provided information about the train's speed.

Dinh-Zarr said it's not yet known what caused the train to derail and that "it's too early to tell" why it was going so fast.

Federal investigators would be on the scene for a full day Tuesday, she said, kicking off a probe into the incident that would likely last seven to 10 days.

There were 80 passengers and five on-duty crew on board when the train derailed and pulled 13 cars off the tracks. Authorities said there were three confirmed deaths. More than 70 people were taken for medical care — including 10 with serious injuries.

In a statement, Amtrak said the train that derailed was Train 501, offering service from Seattle to Portland.

The train was making the inaugural run on the new route as part of a $180.7 million project designed to speed up service by removing passenger trains from a route along Puget Sound that's bogged down by curves, single-track tunnels and freight traffic.

It left Seattle around 6 a.m., according to an Amtrak schedule, and was due in Portland about 3 1/2 hours later.

Kimberly Reason with Sound Transit, the Seattle-area transit agency that owns the tracks, confirmed to the AP that the speed limit at the point where the train derailed is 30 mph (48 kph). Speed signs are posted 2 miles (3 km) before the speed zone changes and just before the speed zone approaching the curve, she said.

Positive train control — the technology that can slow or stop a speeding train — wasn't in use on this stretch of track, according to Amtrak President Richard Anderson.

He spoke on a conference call with reporters, said he was "deeply saddened by all that has happened today."