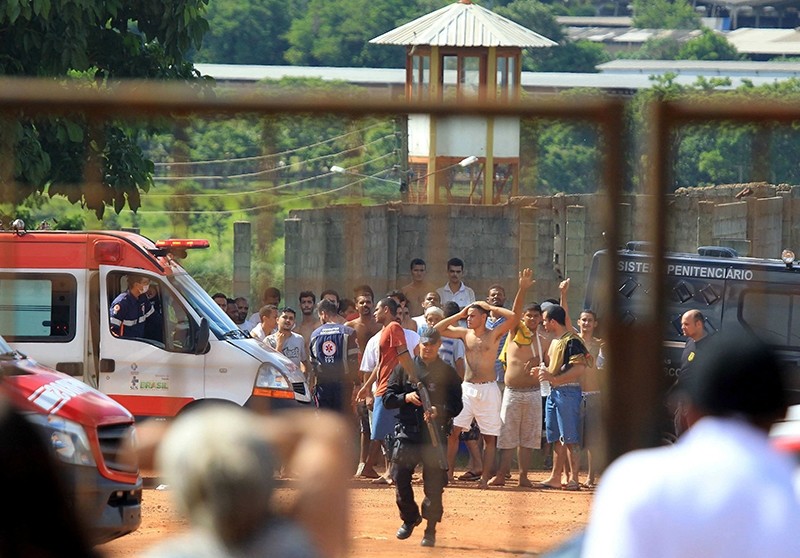 A handout photo made available by O Popular shows a group of inmates guarded by the authorities at a prison in the metropolitan region of Goiania, capital of the Brazilian state of Goias, Brazil, Jan. 1, 2018. (EPA Photo)
by Compiled from Wire Services Jan 02, 2018 12:00 am

According to newspaper O Estado de São Paulo, 106 prisoners escaped the prison in the city of Goiânia, near the capital of Brasilia. Authorities recaptured 27 of the escapees, but the rest remained at large.

Officials told the Brazilian news site G1 that the violence at the Colonia Agroindustrial prison apparently erupted when inmates from one cellblock invaded three others where prisoners from rival gangs are housed.

One of the nine killed in the mayhem was decapitated, news media reported, sparking memories of a prison riot that occurred one year ago today in the Amazon in which 56 people died, several of whom were decapitated and thrown over prison walls.

That riot, which was rooted in a long-standing gang rivalry, came at the beginning of a January marred by widespread prison violence, with 130 prisoners dying in the first 20 days of 2017.

In comments on Monday to newspaper Folha de São Paulo, the head of Brazil's prison guard union, Jorimar Bastos, criticized the amount of resources allocated for oversight at the Goiânia prison, saying only five guards were assigned to watch over 900 prisoners.