US President Trump made over 1,900 false, misleading claims since taking office 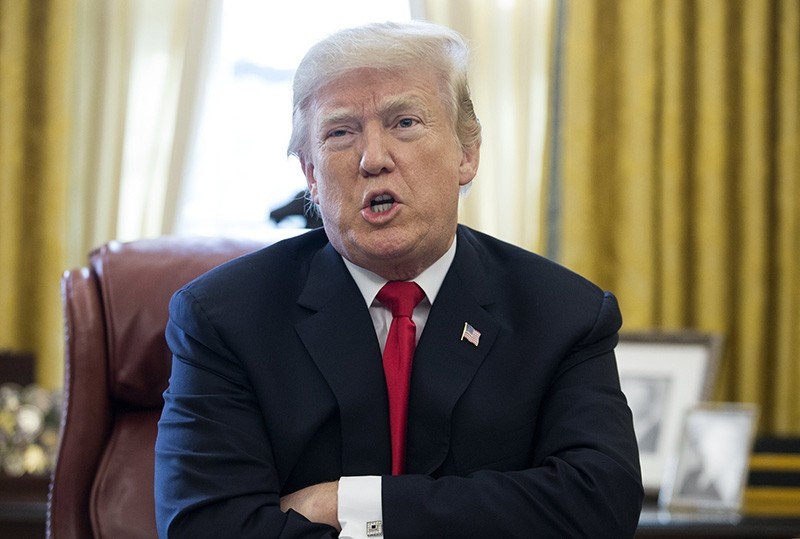 US President Donald J. Trump (R) speaks to members of the news media after signing the Republican tax bill in the Oval Office of the White House in Washington, DC, USA, 22 December 2017. (EPA Photo)
by Daily Sabah Jan 03, 2018 12:00 am

U.S. President Donald Trump has made nearly 2,000 false or misleading claims since he took office, The Washington Post reported Tuesday.

A detailed analysis and tracking performed by Washington Post staff revealed that as of Monday the total number of false or misleading claims stood at 1,950, equaling 5.6 claims a day.

The report said that Trump is known to repeat himself, adding that the president reiterated more than 60 of his claims multiple times over the past 347 days.

Even in his latest interview with The New York Times, Trump reportedly made at least 24 false claims which were later fact-checked by the Washington Post.

The report also said that two claims were Trump's favorite, ranking first among the most repeated with a count of 61.

These two statements are "the Affordable Care Act is dying and 'essentially dead,'" and that the president "secured business investments and job announcements." The Washington Post underlined that both of these claims initially date back to the beginning of Trump's presidency, which means over the past year he "reminded" the public over and over that his business decision led to job openings and that "Obamacare" was doomed to die.

According to the U.S. Congressional Budget Officer, the Obamacare exchanges were foreseen to "remain stable" in the future, while the positive business climate claimed by Trump had been announced even before he took office.

The most repeated claims were followed with Trump saying that the U.S. has the biggest tax cuts, a claim mentioned by the president 53 times. However, U.S. Treasury Department data revealed that the U.S. would actually rank eighth worldwide.

The Washington Post's tracking project first started as a 100-day database, and was later extended to one year.