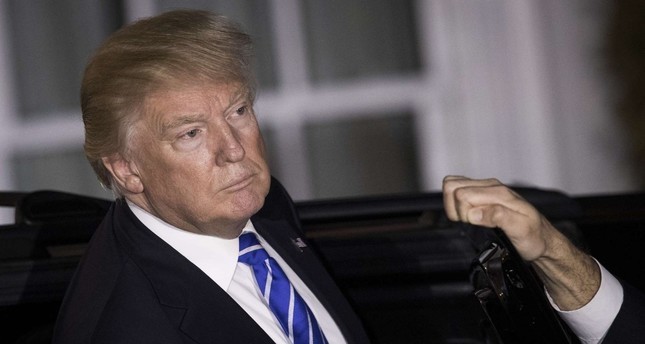 Donald Trump's lawyers are seeking to block publication of an explosive new book that portrays the US president as uninformed and unfit for office.

"Fire and Fury: Inside the Trump White House," describes Trump's 2016 campaign as a publicity stunt not intended to win the presidency, according to excerpts published Wednesday in New York magazine and British newspaper The Guardian.

Among its other explosive claims are that former top aide to the president Steve Bannon described a meeting between Trump's son and Kremlin-linked figures as "treasonous," that Trump's wife Melania cried with sadness on the night he won and that his daughter Ivanka makes fun of his hair and has her own presidential ambitions.

In the letter on Trump's behalf, lawyer Charles Harder alleged that quotes attributed to former White House chief strategist Bannon and others give rise to "legal claims including defamation by libel and slander."

The letter was published online Thursday by the Washington Post.

Bannon, who returned to the helm of the alt-right website Breitbart after leaving the White House in August, was chief executive of Trump's campaign for the last three months before the right-wing populist's surprise victory in the November 2016 elections.

A cease-and-desist letter constitutes a threat, which can only be later enforced through a successful lawsuit.

US laws set a very high standard to prove libel or slander against public figures, who must show that defamatory statements were both false and made with malice.

The cease-and-desist letter is "not from the United States government - it's from the president's personal attorney," White House spokeswoman Sarah Sanders said.

The book is "complete fantasy and just full of tabloid gossip," she said.

Trump "certainly believes that it shouldn't be" published because the contents are false, but "absolutely" supports constitutionally free-speech protections, Sanders added.

She alleged "numerous examples of falsehoods" from the portions of the book revealed so far, noting specifically Wolff's claim that Trump seemed unfamiliar with John Boehner, former speaker of the House of Representatives.

Trump had tweeted about Boehner years before the election and even played golf with the Republican lawmaker, Sanders pointed out.

She called questions about Trump's mental and emotional fitness "disgraceful and laughable."

Trump on Wednesday said that Bannon had "not only lost his job, he lost his mind" when he left the White House. He had "rarely" met alone with Bannon, Trump continued, though the White House said they last telephoned in December.

"Steve Bannon has nothing to do with me or my presidency," Trump said.

He also accused him of leaking "false information" from the White House and helping journalists write "phony books."

Wolff says he conducted hundreds of interviews for the book including with Trump, who allowed him "something like a semi-permanent seat on a couch in the West Wing" in the early months of the administration, as well as during the post-election transition.

In quotes from "Fire and Fury," Bannon derided Trump's son Donald Trump Jr, and son-in-law, Jared Kushner, for taking a then-secret 2016 meeting with Kremlin-linked figures who had promised - but ultimately failed to deliver - embarrassing information about campaign rival Hillary Clinton.

The political novices "thought it was a good idea to meet with a foreign government inside Trump Tower in the conference room on the 25th floor - with no lawyers," Bannon told Wolff. "Even if you thought that this was not treasonous, or unpatriotic, or bad shit - and I happen to think it's all of that - you should have called the FBI immediately."

On a radio programme late Wednesday, following Trump's condemnation, Bannon made no attempt to refute the quotes in the book and called the president "a great man."

"I support him day in and day out," Bannon said.

Asked by reporters on Thursday whether Bannon had betrayed him, Trump replied, "I don't know, he called me a great man last night. So, you know, he obviously changed his tune pretty quick."

Meanwhile, the White House said Thursday that visitors and staff are to be banned from using personal communication devices in the West Wing presidential offices.

Sanders said that White House staff "will be able to conduct business on their government-issued devices and continue working hard on behalf of the American people."