US could freeze up to $2B in security assistance to Pakistan, top official says 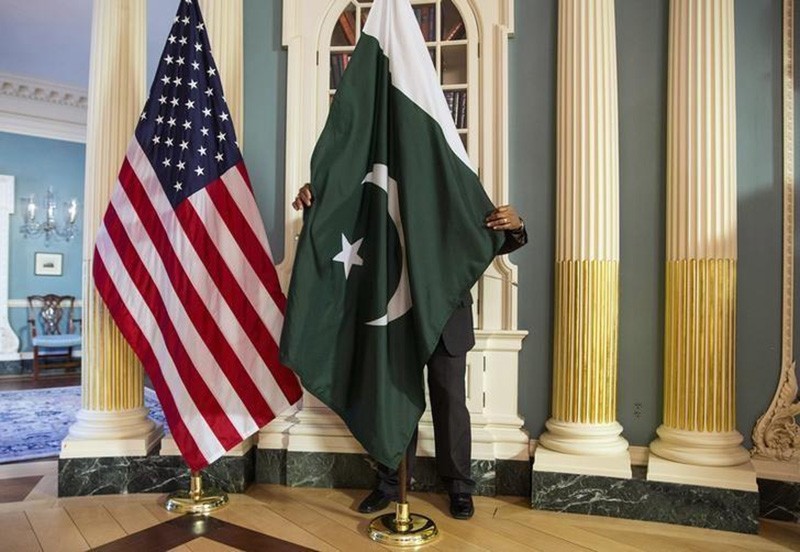 A State Department contractor adjust a Pakistan national flag before a meeting at the State Department in Washington February 19, 2015. (Reuters Photo)
by Associated Press Jan 05, 2018 12:00 am

Up to $2 billion in U.S. aid could be affected by President Donald Trump's suspension of security assistance to Pakistan, which is accused of failing to crack down on Taliban terrorists targeting U.S. personnel in neighboring Afghanistan, a senior U.S. administration official said Friday.

Those funds comprise about $1 billion in planned military assistance, including the $255 million in foreign military financing that was put on hold in August, and an additional $900 million in Coalition Support Funds intended to reimburse Pakistan for counterterrorism operations, said the official, who was not authorized to comment by name and demanded anonymity.

Washington's announcement Thursday signaled growing frustration over Pakistan's level of cooperation as U.S. involvement in the war in Afghanistan enters its 17th year. The abrupt move met with an indignant response from Islamabad, which says it is being scapegoated, and has faced thousands of casualties and more than $120 billion in costs in the war on terror.

As recently as October, Trump credited U.S.-Pakistani cooperation for winning the release of a Canadian-American family held for five years by militants from the Haqqani network — a Taliban faction that stages attacks in Afghanistan.

It remains to be seen how the U.S. decision will affect the long-fraught relations with Pakistan, which has increasingly turned to China for economic assistance and military equipment. The U.S. administration official emphasized that the money wasn't being reassigned, so it could still be available to Pakistan if it changes course. The U.S. may also make exceptions to satisfy critical U.S. national security interests, the official added.

Trump telegraphed a tougher U.S. approach to Pakistan on Monday, when he tweeted that the U.S. had "foolishly" given Pakistan more than $33 billion in aid in the last 15 years and had gotten nothing in return but "lies & deceit." He reiterated longstanding allegations that Pakistan gives "safe haven to the terrorists we hunt in Afghanistan."

State Department spokeswoman Heather Nauert said Thursday that despite sustained high-level engagement with Pakistan's government since Trump unveiled a South Asia strategy in August, "the Taliban and Haqqani network continue to find sanctuary inside Pakistan as they plot to destabilize Afghanistan and attack U.S. and allied personnel." She told reporters that until Pakistan takes "decisive action" against those groups, security assistance was suspended.

Civilian development and economic assistance to Pakistan is not affected.

The State Department also accused Pakistan of severe violations of religious freedom. It announced that it was placing Pakistan on a special watch list, pursuant to 2016 legislation. The step does not carry any serious consequences, although it could lead to sanctions if Pakistan is further relegated to a U.S. list of "countries of particular concern." Washington has criticized the majority-Muslim nation over its blasphemy legislation and treatment of religious minorities

Pakistan's Foreign Ministry objected that the watch list designation was not based on "objective criteria."

Nuzhat Sadiq, chairwoman of Pakistan's Senate Foreign Affairs Committee, said Islamabad can manage without the United States as it did in the 1990s, but would prefer to move the troubled relationship forward. Sadiq said on Friday that "what the U.S. is doing now is not good for its policy against terrorism and for a lasting peace in this region."

U.S. assistance to Pakistan, which rose sharply after the 9/11 attacks, has been declining since 2011 when American commandos killed Osama bin Laden inside Pakistan, straining relations.

Michael Kugelman, deputy director of the Wilson Center's South Asia program, said suspension of U.S. security assistance to Pakistan would not torpedo relations but it was a significant step backward. There are risks for Washington, as Pakistan could potentially curtail intelligence cooperation and U.S. supply lines into Afghanistan, he said.