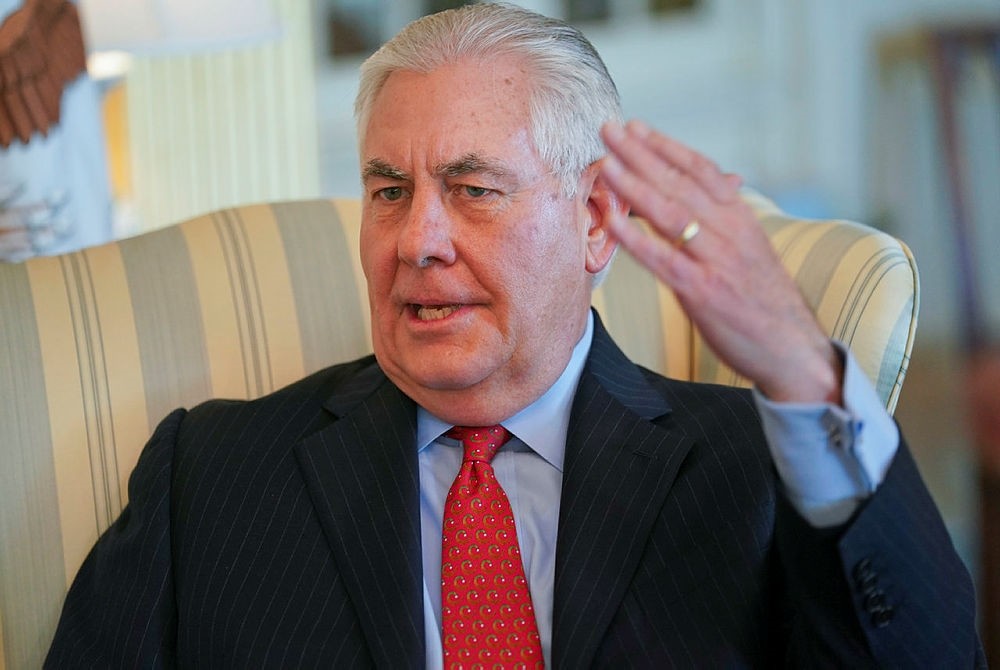 The Trump administration is working with key lawmakers on a legislative fix that could enable the United States to remain in the Iran nuclear deal, Secretary of State Rex Tillerson said in an interview with The Associated Press.

The changes to the U.S. law codifying America's participation the 2015 agreement could come as early as next week or shortly thereafter, Tillerson said Friday. President Donald Trump faces a series of deadlines in the coming days about how to proceed with an accord he describes as terrible and too soft on Iran.

While the talks involving the White House, the State Department and Congress wouldn't increase restrictions on Iran's nuclear activity, as Trump also wants, they could strengthen the way the U.S. enforces the agreement, perhaps persuading Trump that it's worthwhile for the U.S. to stay in it.

"The president said he is either going to fix it or cancel it," Tillerson told the AP as he sat in front of a fireplace in his State Department office suite. "We are in the process of trying to deliver on the promise he made to fix it."

In a wide-ranging interview, Tillerson also chastised the European Union for failing to voice support for protesters in Iran. On North Korea, the former Exxon Mobil CEO said rare talks next week between South Korea and the North about the Olympics could offer clues about Pyongyang's willingness to discuss broader issues, including its nuclear weapons.

Trump hasn't made a decision about what he'll do on Iran next week, when he must decide yet again whether to certify Tehran's compliance with the nuclear pact and continue granting its economy relief from years-old U.S. sanctions. In October, Trump declined to certify Iran's compliance, saying the sanctions relief was disproportionate to Iran's concessions and that the agreement wasn't in America's national interests.

Nonetheless, Trump waived the sanctions for another three months. And he left the ultimate decision on staying in or quitting the deal for later while urging Congress to change the U.S. law concerning the certification. Trump's aides have said the president loathes having to give a thumbs-up to Iran every three months.

Tillerson said the administration was speaking with congressional leaders "on a very active basis" about a fix. He suggested Trump might be inclined to preserve the deal by waiving sanctions again on Jan. 12 if there were signs Congress would act in short order.

"I don't want to suggest we're across the finish line on anything yet," Tillerson said.

Getting agreement in Congress on such a short timeline would be extremely challenging. A congressional aide confirmed there has been significant progress in discussions between key lawmakers and the administration, but the aide said negotiations haven't started on a specific text.

Republican Sen. Bob Corker and Democratic Sen. Ben Cardin, the top lawmakers on the Senate Foreign Relations Committee, visited the White House on Thursday to discuss the matter with national security adviser H.R. McMaster, an aide familiar with the meeting said. The aide wasn't authorized to speak publicly on the possible legislation and demanded anonymity.

One option lawmakers are discussing with the White House is removing the requirement that Trump certify Iranian compliance. Another possibility is changing the law so certification occurs far less often, officials said. Any changes would have to get significant support among Republicans, including many die-hard opponents of the nuclear deal, and some Democrats who largely support it.

It's unclear if changing the so-called Iran Nuclear Review Act will be enough to prevent Trump from tearing up the "worst deal ever," as he has time and again threatened. Tillerson said the administration's approach has been to first fix the U.S. law that governs how the U.S. adheres to the deal, and then work with European allies that helped broker the accord to address its shortcomings. Those flaws, Trump says, include the fact that key nuclear restrictions on Iran expire after several years, and the lack of restrictions on Iran's ballistic missile testing.

Trump's next Iran deadlines come as his administration is showing support for protesters in Iran demonstrating against government mismanagement, economic problems and corruption. Some individual European countries have joined the U.S. in backing the protesters, but Tillerson lamented a lack of similar support from the 28-nation EU.

"We're a bit disappointed that the European Union has not taken a more definitive stance in supporting those voices in the country that are calling for reform," he said.

Tillerson also was cautious about next week's inter-Korean talks, the first such meeting in two years. He said the meeting could be a platform for the North to indicate interest in talks with the U.S.

Although next month's Winter Olympics in South Korea are the only item on the agenda, he said North Korea might raise other matters, including its nuclear weapons.

"Is this the beginning of something? I think it's premature," he said. "We'll see if the North Koreans come with more than just wanting to talk about the Olympics."

Tillerson, who sat in on Trump's Thursday phone call with South Korea's president, called the Koreas meeting a sign that the U.S.-led campaign to isolate North Korea is working. "It's an indication the pressure campaign is causing the leadership, the regime in North Korea to begin to think about, 'This can't go on forever,'" he said.