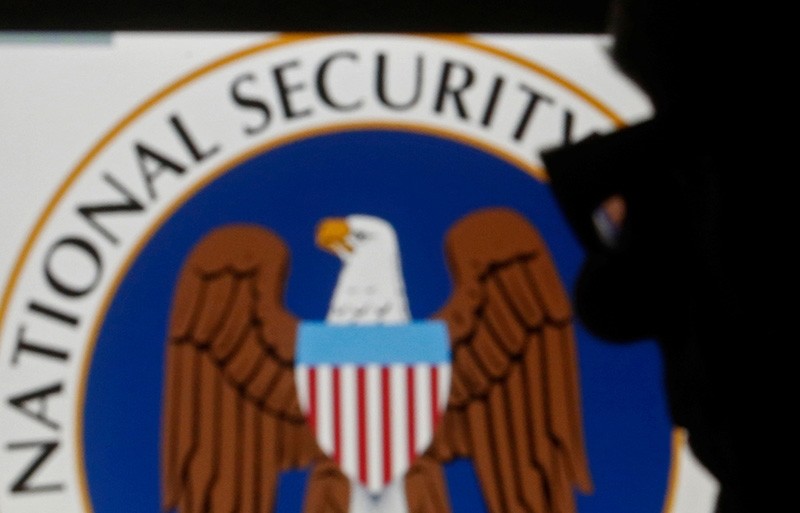 A man is silhouetted near logo of the U.S. National Security Agency (NSA) in this photo illustration taken in Sarajevo March 11, 2015. (Reuters Photo)
by Daily Sabah with Reuters Jan 11, 2018 12:00 am

The vote, which passed 256 to 164, culminated a year long debate in Congress over the proper scope of U.S. intelligence collection, one fueled by the 2013 disclosures of classified surveillance secrets by former NSA contractor Edward Snowden.

The expiring law, Section 702 of the FISA Amendments Act, allows the government to eavesdrop on vast amounts of digital communications from foreigners living outside the United States, and incidentally Americans as well, via U.S. companies like Facebook Inc., Verizon Communications Inc. and Alphabet Inc.'s Google.

The House also voted 233 to 183 to reject an amendment proposing extensive reforms to the law, including a requirement that officials obtain warrants in most cases before reading communications by American citizens.

Most lawmakers expect renewal to become law, although it still requires Senate approval and must be signed into law by President Donald Trump.

But Trump appeared Thursday to question the merits of the program, contradicting the official White House position and renewing unsubstantiated allegations that the previous administration of Barack Obama improperly surveilled his campaign during the 2016 election.

"This is the act that may have been used, with the help of the discredited and phony Dossier, to so badly surveil and abuse the Trump Campaign by the previous administration and others?" the president tweeted. The White House did not immediately respond to a request to clarify Trump's tweet.

Some conservative, libertarian-leaning Republicans and liberal Democrats were attempting to persuade colleagues to support an amendment to the bill to include more privacy protections, such as requiring a warrant before the NSA or other intelligence agencies could search for and read digital communications belonging to Americans whose data is incidentally collected under the program.

The White House, U.S. intelligence agencies and Republican leaders in Congress have said they consider the tool indispensable and in need of little or no revision.

Without congressional action, legal support for Section 702 of the Foreign Intelligence Surveillance Act, which authorizes the program, would have expired next week.