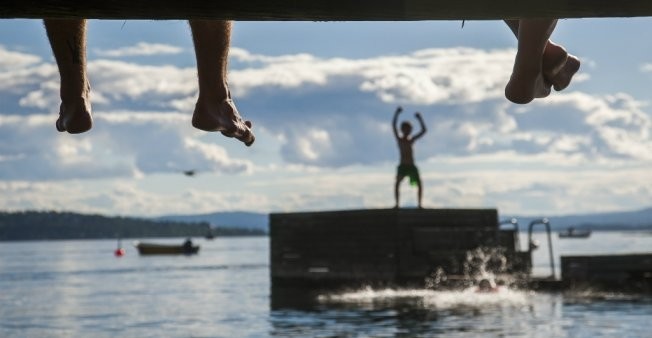 Sitting on the boardwalk parents watch children play and swim from a floating dock off the island of Lindoya in the Oslo fjord on July 18, 2014. (AFP Photo)
by Associated Press Jan 13, 2018 12:00 am

Norwegians generally live longer than Americans. There's a generous safety net of health care and pensions. And although it's pricey, the country last year was named the happiest on Earth.

U.S. President Donald Trump says the United States should take in more Norwegians, but is it any wonder that more Americans are going the other way?

The country of 5.2 million people that seldom makes global headlines awoke Friday to the news that Trump wanted to have more immigrants from Norway, rather than Haiti and countries in Africa that he disparaged with a vulgar term.

The comments came after Trump met Wednesday with Norwegian Prime Minister Erna Solberg in Washington. His remarks were seen in Oslo as racially charged and sharply at odds with Norwegian values of inclusivity.

"This says a lot about what Trump thinks it means to be an American. It is more about ethnicity than shared values," said Hilde Restad, an associate professor in international affairs and a former U.S. resident.

She added that Norwegians generally didn't want "to be flattered by this U.S. president in this way."

Henrik Heldahl, a commentator for the political website Amerikansk Politikk, said the sentiment would have been welcomed in Norway had Trump used less coarse language for Haiti and African countries.

He said "it could have been a compliment and a nice sending off for Erna Solberg as a trusted U.S. partner," Heldahl said. "But the way he said it guarantees that the reaction here will be very negative."

Trump's comments were unlikely to trigger an exodus from one of the wealthiest countries in the world.

Oil-rich Norway ranks fourth in the world for GDP per person, according to the World Bank, compared with the U.S., which was eighth. Norway also boasts a universal health care system, low unemployment and $1 trillion "rainy day" fund fueled by its offshore oil and gas resources that helps pay for generous pensions and other social welfare programs.

"Why would people from Norway want to immigrate here? They have actual health care, and longer life expectancy," author Stephen King wrote on Twitter.

Last year, Norway soared to the top slot in the World Happiness Report. The U.S. was 14th in the latest ranking, down from No. 13 in 2016, and over the years Americans steadily have been rating themselves less happy.

Not that the Nordic land of Edvard Munch's "The Scream" is a perfect paradise: It's gloomy from a lack of sunlight for most of the winter, temperatures are comparable to the northern United States, and the cost of living is high — a beer can cost as much as $12, and so can a meal at McDonald's.

It also is not as ethnically homogenous as some might think. About 17 percent of inhabitants are immigrants or children of immigrants.

Norway has its own battles over foreign-born migrants, with the populist Progress Party — a junior partner in the ruling coalition — calling for a tightening of immigration controls.

Solberg's U.S. visit was hailed as a success in Norway where she was praised for raising issues around climate change and international trade. But immigration appeared not to have been on the agenda.

Christian Tybring Gjedde, the Progress Party's head of foreign policy, said Trump was stating that "citizens of other countries are not as nice as Norwegians."

"I would never express myself in that way, but it is flattering that he wants more of us in the country," he said, adding: "Asylum seekers are expensive and a challenge to the culture."

National Norwegian broadcaster TV2 went to the streets in Oslo on Friday, asking people if they wanted to move to the U.S. None said they wanted to leave.

"Absolutely not," one unidentified man said. And an unnamed woman added: "If they get a new president."