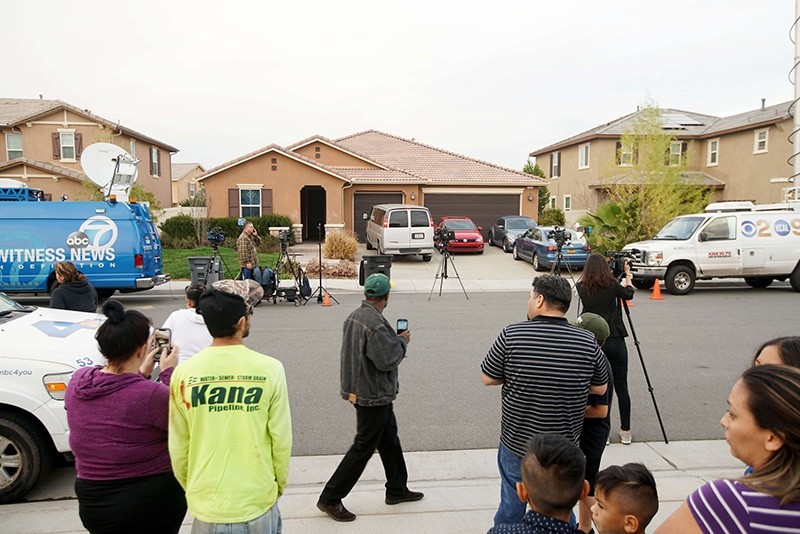 A home where a couple was arrested after police discovered that 13 people had been held captive in filthy conditions with some shackled to beds with chains and padlocks, Jan.15, 2018 in Perris California. (Sandy Huffaker/Getty Images/AFP)
by Jan 16, 2018 12:00 am

A California couple has been arrested on charges of torture after authorities on Monday said their 13 malnourished children were held captive in their home, with some shackled to beds in the dark.

Authorities said they were alerted after a 17-year-old girl managed to escape the house on Sunday and call police using a cellphone she found.

She was so emaciated that officers said they originally thought she was just 10 years old.

The 13 victims at the house in Perris, California ranged in age from two to 29, the Riverside County Sheriff's Department said in a statement.

"Further investigation revealed several children shackled to their beds with chains and padlocks in dark and foul-smelling surroundings, but the parents were unable to immediately provide a logical reason why their children were restrained in that manner," the statement said.

"Deputies located what they believed to be 12 children inside the house, but were shocked to discover that seven of them were actually adults, ranging in age from 18 to 29. The victims appeared to be malnourished and very dirty."

The sheriff's office said "the victims were provided with food and beverages after they claimed to be starving". 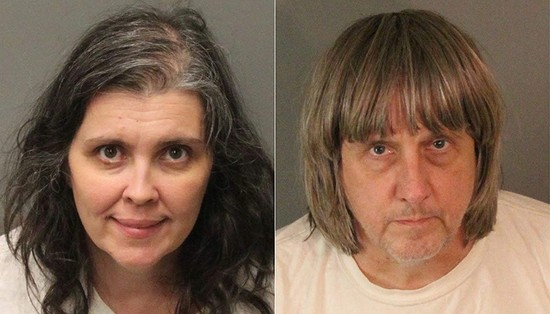 The Spanish-style stucco house where the victims were allegedly held is located in a middle class neighborhood of Perris, a small city some 70 miles (110 kilometers) southeast of Los Angeles.

The home boasted three cars as well as a van with tinted windows. One of the cars, a blue compact, had a child's seat in the back.

There are indications that the children were allowed outside the house in recent years.

A Facebook page under the name of David-Louise Turpin includes pictures of the couple attending various marriage or exchange of vows ceremonies from 2011 to 2016 with their children present.

In the latest set, uploaded in April-July 2016, Louise Turpin wears a long white wedding gown while her husband is dressed in a suit.

An Elvis Presley impersonator holds a microphone and poses with the couple and children in a scene reminiscent of a Las Vegas wedding.

Nine girls, all with long dark hair, wear matching fuchsia dresses with white tights, while a baby girl is dressed in a bright pink dress.

Three boys, their dark hair in bowl cuts like David Turpin, are dressed in suits with red ties.

An April 2016 photograph shows the same smiling children and the couple wearing jeans and red t-shirts that read "Thing 1," "Thing 2," "Thing 3" and so on -- a take on the mischievous siblings in the popular Dr Seuss book "The Cat in the Hat."

Some of the children look gaunt, but not obviously so.

In another September 2015 photograph, Louise Turpin holds a baby wearing a t-shirt reading "Mommy loves me."

"It's just really, really sad. There's places that kids can go if you don't want your kids, if you can't take care of them, and here's a beautiful neighborhood, brand new housing track, newer cars in the yard, and here's some kids from 29 to two that was just held captive and malnourished and filthy. It's just heartbreaking," Adams told AFP.

Another neighbor, Julio Reyes, 38, said: "We've seen a couple of teenagers maybe last year mowing the lawn, and you know they put some Christmas decorations. Never really thought anything of any sort would happen like that."

U.S. media reported that the parents had previously filed for bankruptcy.

David Turpin is registered in state records as head of a private school, but its address matches that of the Turpins' home.

The school opened in March 2011 and only has six students according to the latest state education department data.

The Los Angeles Times said the couple had lived at the Perris house since 2010, after a move from Texas, adding they went bankrupt twice.

According to court papers when they filed for bankruptcy in 2011, the couple said they accrued between $100,000 and $500,000 in debt opening the school, The New York Times said.

The paper said the same year David Turpin was working as an engineer for defense contractor Northrop Grumman, earning $140,000 a year, while his wife was listed as a homemaker.

The case recalls previous kidnapping horrors that have made global headlines in recent years.

Ariel Castro abducted three young women he repeatedly raped for a decade at his Cleveland home. He was arrested in May 2013 after one of his victims escaped.

Jaycee Dugard was kidnapped as an 11-year-old and repeatedly raped over 18 years by convicted sex offender Phillip Garrido in California. She was rescued in August 2009.

Austria has seen two high profile kidnaps -- Elisabeth Fritzl was imprisoned and raped over a period of 24 years by her father Josef while Natascha Kampusch was held for eight years by Wolfgang Priklopil before her 2006 escape.