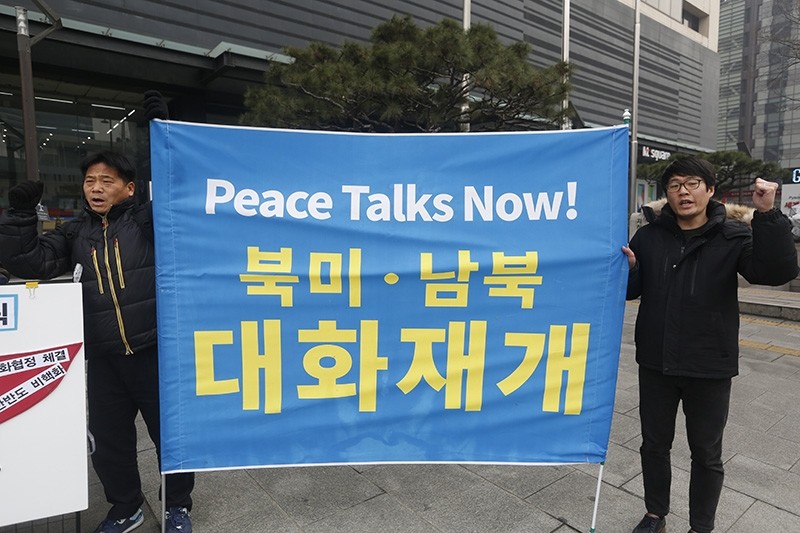 South Korean protesters hold up a banner during a rally against US policy towards North Korea near the US embassy in Seoul, South Korea, 16 January 2018. (EPA Photo)
by Jan 16, 2018 12:00 am

The U.S. military is conducting "very serious" training for a possible conflict with North Korea, a top Republican lawmaker said Tuesday, though he said he hoped such preparations would never be put to use.

Congressman Mac Thornberry, who chairs the powerful House Armed Services Committee that provides civilian oversight to the Pentagon, said the administration of President Donald Trump is closely studying its options.

"The administration is very seriously looking at what would be involved with military options when it comes to North Korea," Thornberry told a group of reporters.

"The military has preparations under way, and hopefully they will not be needed."

Defense Secretary Jim Mattis has repeatedly insisted that efforts to resolve the North Korea crisis should be diplomatically led, though he has said the Pentagon always plans for any contingency.

Tensions on the Korean peninsula and between Pyongyang and Washington have been sky-high for months, after North Korean leader Kim Jong-Un repeatedly test-fired missiles potentially capable of carrying a nuclear warhead and hitting the United States.

He also authorized the detonation of North Korea's most powerful nuclear device to date.

Though the U.S. military routinely trains on the Korean peninsula with South Korean counterparts, The New York Times reported Sunday that a series of drills in the United States suggest a new focus on readying the military for conflict with North Korea.

"If you are going to ask men and women to risk their lives on behalf of the nation, we owe them not only the best military equipment but also the best training and preparation that our country can provide them and I think that's part of what's going on," Thornberry said.

Last week, global tensions cooled somewhat with the resumption of talks between North and South Korea.

But the rhetoric picked back up again Tuesday, when North Korea denounced President Donald Trump's tweeted message that he has a bigger nuclear button than Kim as the "spasm of a lunatic" and the "bark of a rabid dog."

On January 2, Trump had written on Twitter: "Will someone from his depleted and food starved regime please inform him that I too have a Nuclear Button, but it is a much bigger & more powerful one than his, and my Button works!"

Further adding to jitters, residents in Hawaii were subjected to an erroneous alert Saturday warning them that a missile was inbound.