US government 'could very well' shut down, Trump says 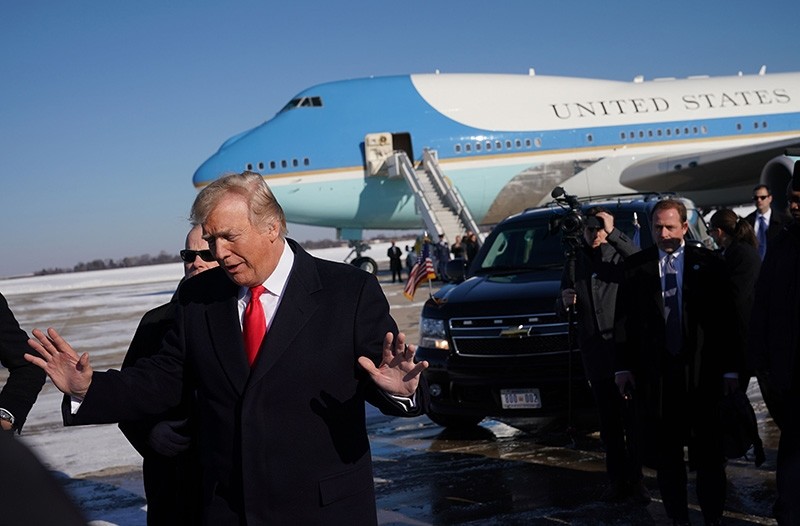 US President Donald Trump speaks to well-wishers upon arrival at Pittsburgh International Airport in Pittsburgh, Pennsylvania on January 18, 2018. (AFP Photo)
by Compiled from Wire Services Jan 18, 2018 12:00 am

President Donald Trump said on Thursday the U.S. government "could very well" shut down and that would be very harmful to the military.

"If the country shuts down, which could very well be, the budget should be handled a lot differently than it has been handled for the last long period of time," Trump said in answer to reporters' questions as he arrived for a visit at the Pentagon.

"If for any reason it shuts down, the worst thing is what happens to our military."

The House of Representatives was expected to vote as early as Thursday on a short-term funding measure, but it was unclear if Republicans had the votes to prevail.

In the event of a shutdown, federal employees for agencies considered non-essential are ordered to stay home until a budget deal is struck, at which point they are paid retroactively. The most recent shutdowns -- in 1995, 1996 and 2013 -- saw some 800,000 workers furloughed per day.

Key government bodies such as the White House, Congress, State Department and Pentagon would remain operational, but would likely furlough some staff. The military would still report for duty, but troops -- including in combat -- would potentially not be paid.

And yet in another tweet, Trump criticized the Republican short-term funding measure, opposing a sweetener intended to make it hard for Democrats to vote against it.

House Speaker Paul Ryan said later he had spoken to the president, and insisted: "He fully supports passing what we're bringing to the floor today."

The sweetener is a six-year extension of a popular children's health insurance program, known as CHIP, a program Democrats have worked hard to protect.

But Trump insisted: "CHIP should be part of a long term solution, not a 30 Day, or short term, extension!"

Republican Senator John Cornyn quickly corrected Trump in a counter-tweet: "The current house Continuing Resolution package has a six-year extension of CHIP, not a 30 day extension."

Up against a similar deadline last month, lawmakers had passed a short-term resolution to keep the federal government funded until January 20.

Many Democrats are already opposed to another short-term fix, leaving Republicans to rely on their own divided caucus to advance the measure.

If it fails, Democrats will gain greater leverage to insist on a funding compromise that includes protection from deportation for the so-called "Dreamers," the estimated 700,000 immigrants brought to the country illegally as children.

Negotiations on a bipartisan compromise that includes a fix on DACA, as the Deferred Action on Childhood Arrivals program is known, collapsed in acrimony at a White House meeting last week.

White House chief of staff John Kelly met Wednesday with the Congressional Hispanic Caucus to make the case that Trump had "evolved" on his signature campaign promise to build a wall the length of the U.S. border.

Funding for border security, but not a full-blown wall, was part of the bipartisan budget compromise presented at last week's contentious White House talks.

Participants at the meeting with Kelly quoted the retired general and former head of the Department of Homeland Security as saying Trump was not "fully informed" when he made the wall promise.

But Trump hit back on Twitter Thursday, writing: "The Wall is the Wall, it has never changed or evolved from the first day I conceived of it."

"If there is no Wall, there is no Deal!" Trump said in another tweet that described Mexico as "now rated the most dangerous country in the world."

The president said some of the wall will be "see through" -- a protection, he said last July, against people throwing "large sacks of drugs" over -- and repeated that it will be paid for "directly or indirectly" by Mexico.

"The $20 billion dollar Wall is 'peanuts' compared to what Mexico makes from the U.S. NAFTA is a bad joke!" he said, reasserting his position on the trade pact which is currently being renegotiated.

Mexico once again said it would not pay for the wall.

"I'm looking for something that President Trump supports, and he's not yet indicated what measure he's willing to sign," McConnell told reporters.

"As soon as we figure out what he is for, then I would be convinced that we were not just spinning our wheels."